A reverse image search showed the image was captured and shared no later than January 19 2017, and it appeared in a virally popular tweet at that time:

my dad is at a trump protest in nyc because he is a true hero, and so is this woman he got a snap of pic.twitter.com/yDuvS7mENc

In the somewhat blurry image, a woman in a scarf and mittens is holding a sign which reads:

Poll numbers for approval ratings remain constantly in flux depending on a number of factors. Rasmussen Reports maintained a “Trump Approval Index History” page, and the first data available were for January 20 2017 (after the sign was photographed.) The ongoing index listed five metrics along with values for each; January 20 2017 numbers were as follows:

That particular set of numbers — which did not come from CBS — held 38 percent of poll respondents “strongly approved” of President Trump. Of those polled, 56 percent were listed as the total who approved of him. Conversely, 36 percent strongly disapproved of Trump, and 44 percent total disapproved of him.

Based on the Rasmussen Reports numbers for January 20 2017, it appeared the first 32 percent approval statistic might not be accurate. However, one day prior to the original tweet, CBS News published a video-based item, “Trump’s low ratings,” with a description box reading:

Those numbers were for Trump as president-elect, not president. They were nevertheless accurate, based on the January 2017 use of the protester’s sign (with a margin of error of +/- three points), based on Trump’s polled “favorable” ratings for the period of January 13 through January 17 2017: 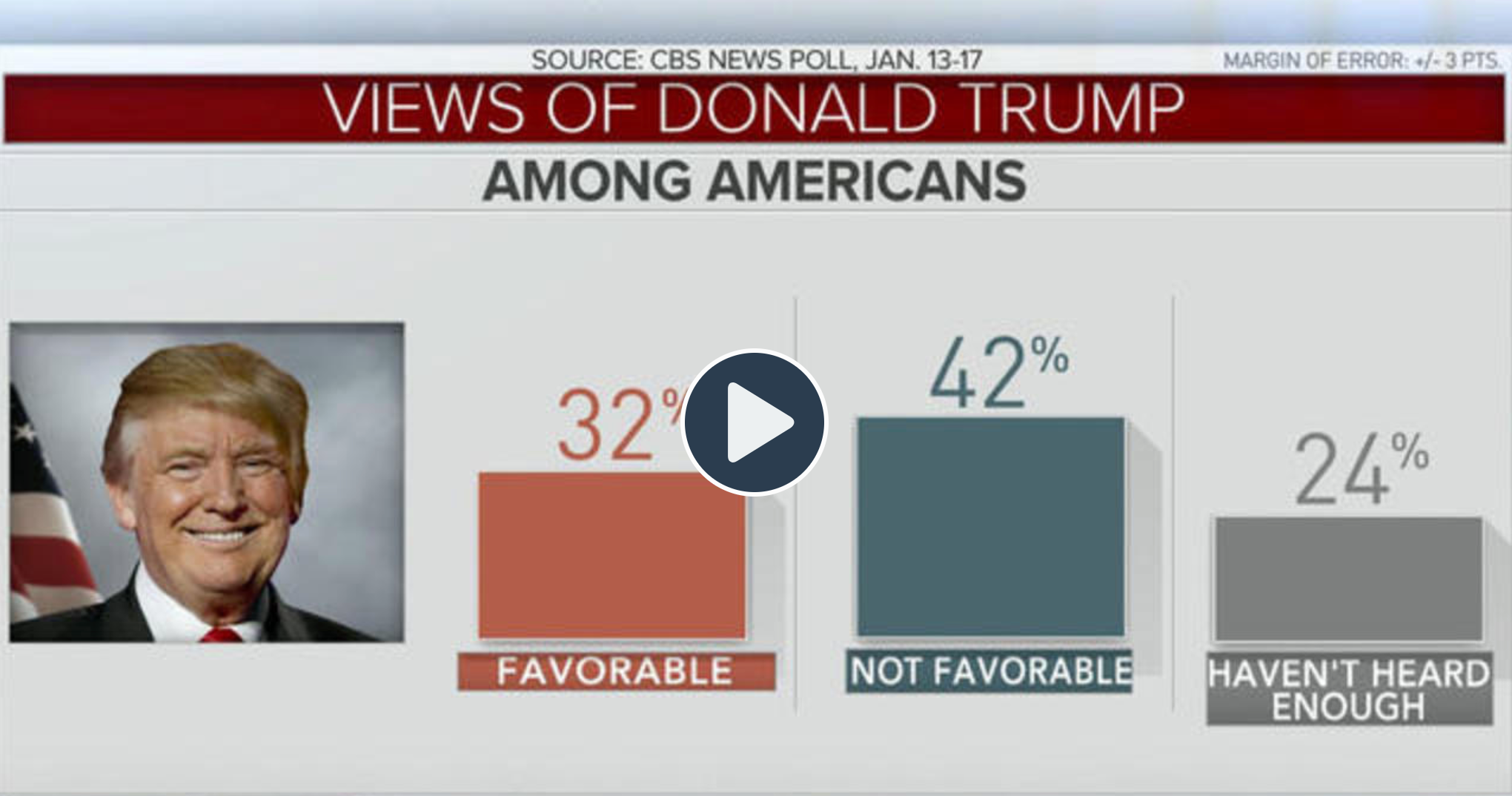 CBS News referenced the larger poll from which the numbers were derived in other reporting with a footnote about the scope and methodology of the poll; the relevant poll was uploaded in its entirety to Scribd on January 18 2019:

This poll was conducted by telephone January 13-17, 2017 among a random sample of 1,257 adults nationwide. Data collection was conducted on behalf of CBS News by SSRS of Media, PA. Phone numbers were dialed from samples of both standard land-line and cell phones … This poll release conforms to the Standards of Disclosure of the National Council on Public Polls.

Unlike continually-updated presidential approval ratings, the film Paul Blart: Mall Cop was released in 2009 and critics’ rating and reviews of it were largely from the time it premiered. According to Rotten Tomatoes (the source listed on the sign), Paul Blart: Mall Cop maintained a critics’ approval rating of exactly 33 percent, based on an aggregate of formal film ratings: 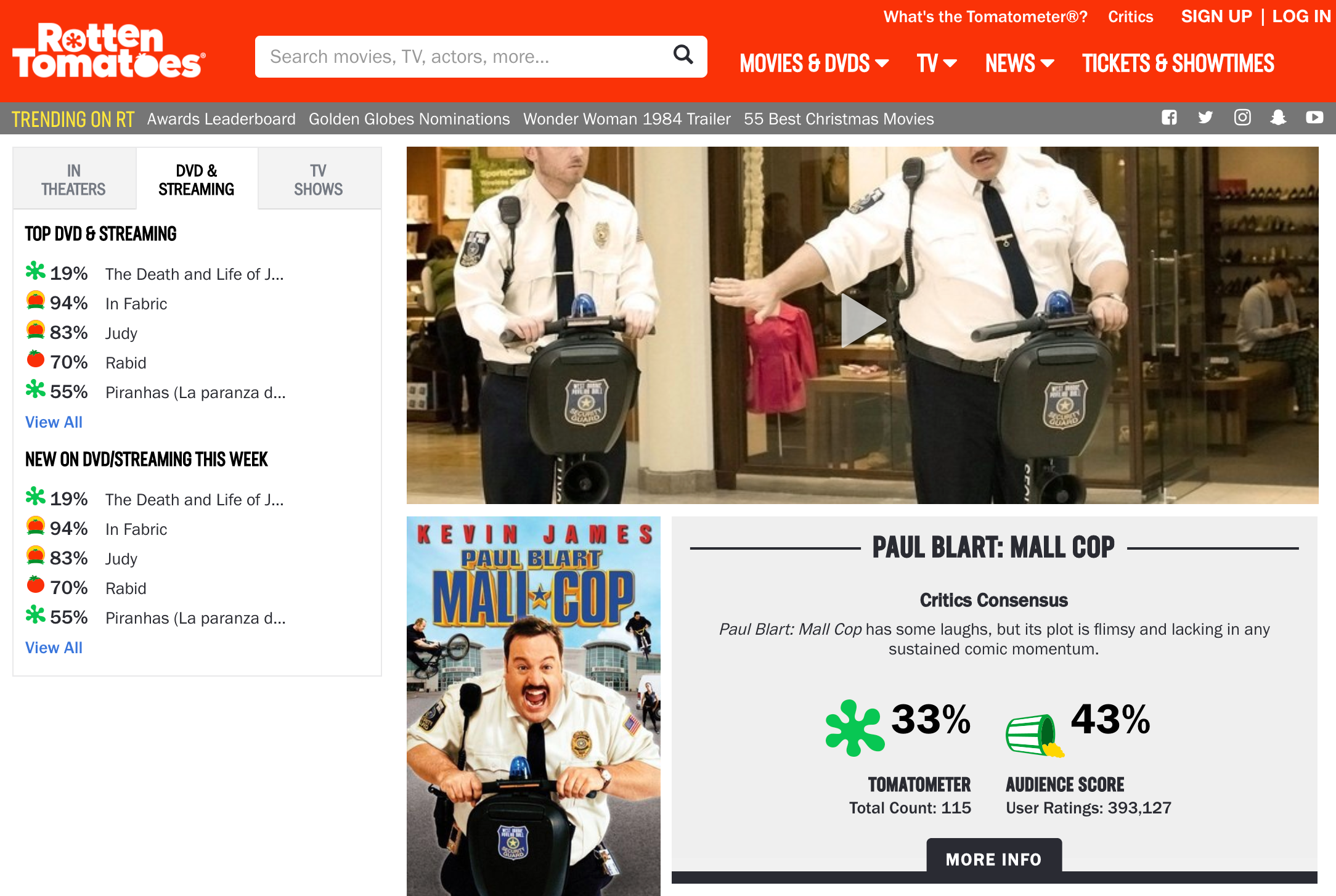 For context, RealClearPolitics aggregated various polls on its “latest polls” page, archived here on December 11 2019. A number of polls relating to primaries were on that list, as were three separate polls listed as “President Trump Job Approval.” Rasmussen, Economist/YouGov, and Monmouth provided figures for that date and metric, which were as follows:

Rasmussen’s approve/disapprove numbers were 51 and 48 respectively. Economist/YouGov’s were 44 and 53 respectively, and Monmouth’s were 44 and 49 respectively. None of the figures were as low as the CBS poll’s 32 percent “favorable” rating in January 2017. Three additional polling outfits (Quinnipiac, The Hill/HarrisX, and Politico/Morning Consult) released their own numbers for the approval/disapproval metric on December 10 2019:

Those three were slightly less favorable to President Trump than the next day’s polls. In the first (Quinnipiac), Trump’s approval rating was at 41; in the second and third (The Hill/HarrisX and Politico/Morning Consult), his approval ratings were 46 and 39 respectively.

The Rasmussen Reports daily Presidential Tracking Poll for [December 11 2019] shows that 51% of Likely U.S. Voters approve of President Trump’s job performance. Forty-eight percent (48%) disapprove. The latest figures include 37% who Strongly Approve of the job Trump is doing and 40% who Strongly Disapprove. This gives him a Presidential Approval Index rating of -3. (see trends).

A cyclically circulating photograph of a protest sign claimed that Donald Trump had a 32 percent approval rating via CBS — one point lower than ratings for the film Paul Blart: Mall Cop, which had a 33 percent approval rating via Rotten Tomatoes. Poll numbers are dynamic and fluctuate, and the image was taken around January 19 2017. A CBS News poll from that time reported the 32 percent “favorable” rating for the president-elect. Rotten Tomatoes’ critics rating for Paul Blart: Mall Cop was 33 percent based on an aggregate critics’ review; audience scores placed the film ten percent higher, at 43 percent. As such, the sign was accurate at the time it was created, likely for Trump’s January 2017 inauguration.