In late February 2022, World Taekwondo stripped Vladimir Putin of his black belt due to Russia's invasion of Ukraine.

On March 2 2022, two Imgur posts claimed Russia’s president Vladimir Putin was “stripped of his black belt”; one of the two posts was an Instagram screenshot, the other depicting a February 28 2022 post on Reddit’s r/worldnews: 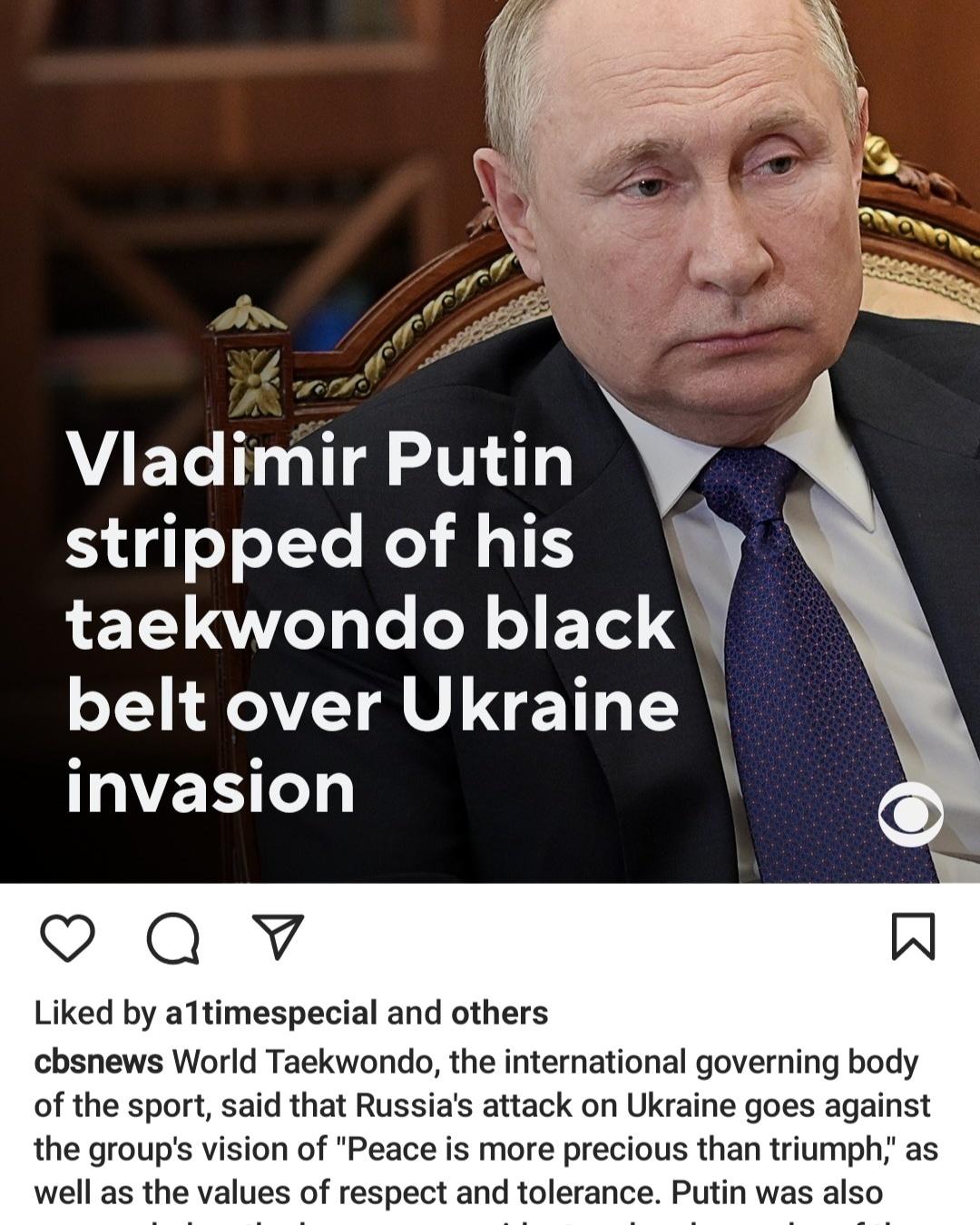 In the screenshot above, a post from the official Instagram account of CBS News referenced “World Taekwondo.” That entity was described as “the international governing body of the sport,” and the caption read:

World Taekwondo, the international governing body of the sport, said that Russia’s attack on Ukraine goes against the group’s vision of “Peace is more precious than triumph,” as well as the values of respect and tolerance. Putin was also suspended as the honorary president and ambassador of the International Judo Federation.⁠ ⁠

A “black belt” is considered a broad signifier of expertise in some martial arts. JudoInfo.com says that the practice is relatively modern:

In the days before Kano created Judo, there was no kyu/dan ranking system in the martial arts. A more traditional method of recognizing achievement was the presentation of certificates or scrolls, often with the secrets of the school inscribed. Kano started the modern rank system when he awarded shodan to two of his senior students (Shiro Saigo and Tsunejiro Tomita) in 1883. Even then, there was no external differentiation between yudansha (black belt ranks) and mudansha (those who hadn’t yet attained black belt ranking).

A Taekwondo Wiki entry provided a breakdown for the meaning of “dan” in the sport:

The term Dan (단) is commonly used in Korean martial arts to denote a black belt. Literally, however, the word more closely translates as “level” or “stage”. For example, some jumping kicks are called “ee dan” kicks, which translates as “level two”, where ee is the number two in the sino-Korean numbering system. In English, the different levels of black belt are called 1st dan, 2nd dan, 3rd dan, etc. (Or in Korean: il dan, ee dan, sam dan, etc.)

What is World Taekwondo?

World Taekwondo is described as one of the main international governing bodies for the sport. Its “about” page says:

However, limiting results to anything published prior to Russia’s invasion of Ukraine returned some older news items about Putin and combat sports. In November 2013, The Independent published “Vladimir Putin is awarded grandmaster rank in taekwondo and given black belt – despite not practising the sport,” reporting:

Russian president Vladimir Putin has been presented with a black belt and made a grandmaster of taekwondo during an official visit to South Korea, state media said.

Despite not actually practicing taekwondo himself, Mr Putin has achieved the elusive ninth Dan – meaning he now ranks higher than famous US martial artist Chuck Norris, who is stuck on the eighth.

[In November 2013] the head of the World Taekwondo Federation, Choue Chung-won, presented the Russian leader with the belt and a diploma bestowing the honorary status, according to reports from the official RIA Novosti news agency.

In July 2017, the Washington Post published “Is Vladimir Putin a judo fraud?” — a piece questioning whether Putin’s alleged achievements in martial arts were fabricated:

Vladimir Putin’s martial arts skills are the stuff of legend. Thanks to a steady stream of fawning coverage from Russian state media — often repeated uncritically in American news outlets — Putin is widely reputed to be some sort of high-level expert in judo, his abilities so impressive and so well-known that they have become a metaphor for his governing style.

Putin does possess a black belt, after all, and the 64-year-old Russian president has received multiple martial arts honors from organizations that give out those sorts of things. A quick Google search turns up a huge trove of photos and news footage of him in a white robe flipping opponents on sparring mats with apparent ease. He has co-authored books about judo, and he even starred in an instructional video, aptly titled “Let’s Learn Judo with Vladimir Putin.”

According to [Lawfare editor Benjamin] Wittes, a 47-year-old who holds black belts in taekwondo and aikido, many of Putin’s judo videos — and there are lots of them — are bunk. They typically start with some shots of Putin and his sparring partners warming up, then transition into Putin throwing or tackling an opponent. Wittes says Putin’s partners drop to the floor all too easily.

“At least in the videos I have seen, there are no committed attacks on Putin, and I see no evidence that his opponents are ever trying to get the better of him,” Wittes wrote on Lawfare. “The videos are demonstrations in which he shows off his masculine prowess with them taking what the Japanese call ukemi (defensive falls) for him.”

In a Facebook post titled “Why Won’t Vladimir Putin Fight Me?,” Wittes put it more bluntly: “Putin is fraud martial artist. He only fights people who are in his power, and they are all taking falls for him.”

Was Putin Stripped of His Black Belt?

According to World Taekwondo, yes.

In this regard, World Taekwondo has decided to withdraw the honorary 9th dan black belt conferred to Mr. Vladimir Putin in November 2013.

World Taekwondo’s thoughts are with the people of Ukraine and we hope for a peaceful and immediate end to this war.

NPR’s noted that Putin’s black belt was “honorary” in the headline of an article about World Taekwondo’s statement.

We would also like to note that Putin is not the only person in a position of influence or power who has been awarded this title. In November 2021, former United States President Donald Trump also received an honorary 9th dan black belt:

That ranks him above 8th Dan Chuck Norris — and a lot of other Taekwondo masters — which may explain why the combat sports community is up in arms. Blame World Taekwondo Headquarters (Kukkiwon) President Lee Dong-sup, who insists there are no political motives behind the honorary certificate.

“It is my honor to receive the Honorary Dan Certificate and I think Taekwondo is magnificent martial art for self defense,” the former U.S. President said after donning his Dobok. “I wish to see Kukkiwon Taekwondo Team’s demonstration.”

Several popular social media posts asserted that Vladimir Putin was stripped of his black belt after Russia invaded Ukraine in late February 28 2022. News reports from 2013 indicated that Putin’s black belt in Taekwondo was honorary, not earned through practice of the sport (though he reportedly practiced Judo). In a February 28 2022 statement, governing body World Taekwondo affirmed it “decided to withdraw the honorary 9th dan black belt conferred to Mr. Vladimir Putin in November 2013.” Since Putin did not earn the rank through prowess or practice, we’ve rated the claim Decontextualized.