Rapunzel was quarantined in Tangled and she was from the kingdom of Corona.

As coronavirus quarantine memes circulated in mid-March 2020, one referenced the Disney film Tangled, first stating that Rapunzel was “quarantined” during the film, and then tacking on people should “Google” the name of her kingdom — purportedly because it was named “Corona”:

If Rapunzel can entertain herself in her tower for 18 years, I think you can handle being in quarantine for a few weeks.

so you’re tellin me rapunzel was in quarantine all her life cause her mom was hiding her from CORONA pic.twitter.com/Urcimv6LWN

In the March 15 2020 tweet above, the first user says that if “Rapunzel can entertain herself in her tower for 18 years, I think you can handle being in quarantine for a few weeks.” The second tweet, one day later, claimed:

Screenshots of the meme also circulated: 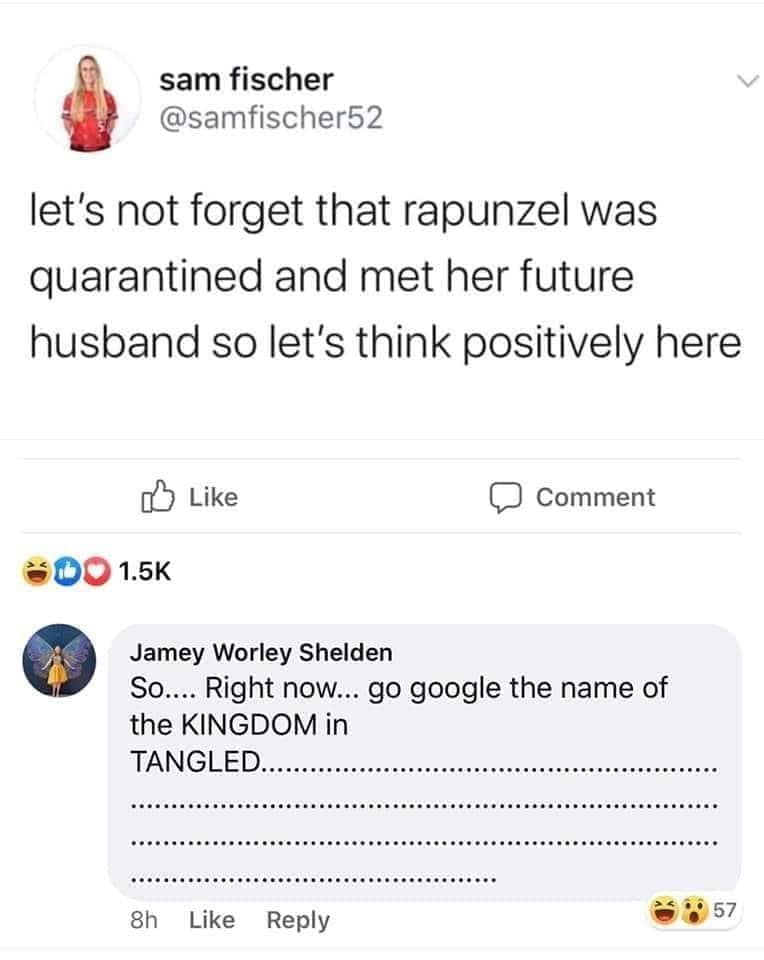 “So…. Right now… go google the name of the KINGDOM in TANGLED … 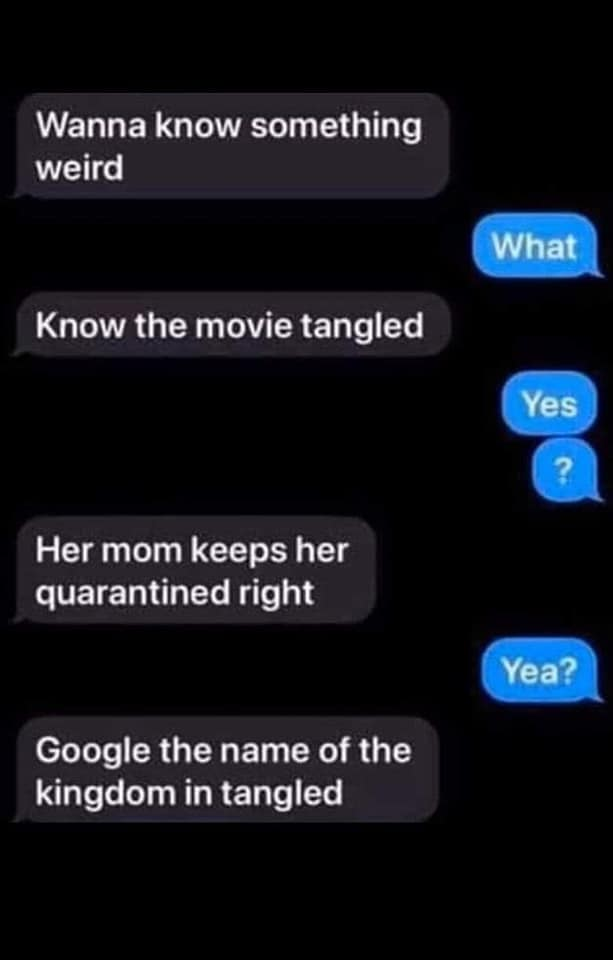 – Her mom keeps her quarantined right

– Google the name of the kingdom in tangled

It appeared as if memes organically began saying that in Tangled, Rapunzel was effectively (if not explicitly) quarantined; then, almost immediately, response memes suggested that Rapunzel’s kingdom was called “Corona,” an odd quirk of the tale causing far more interest in the memes. Following on from there, memes in the question and answer format (first saying Rapunzel was quarantined in Tangled, then adding the “kingdom of Corona” element as something of a punchline) looked more widespread than those combining the two claims into one initial statement.

In response to the meme, people did Google the name of the kingdom in Tangled: 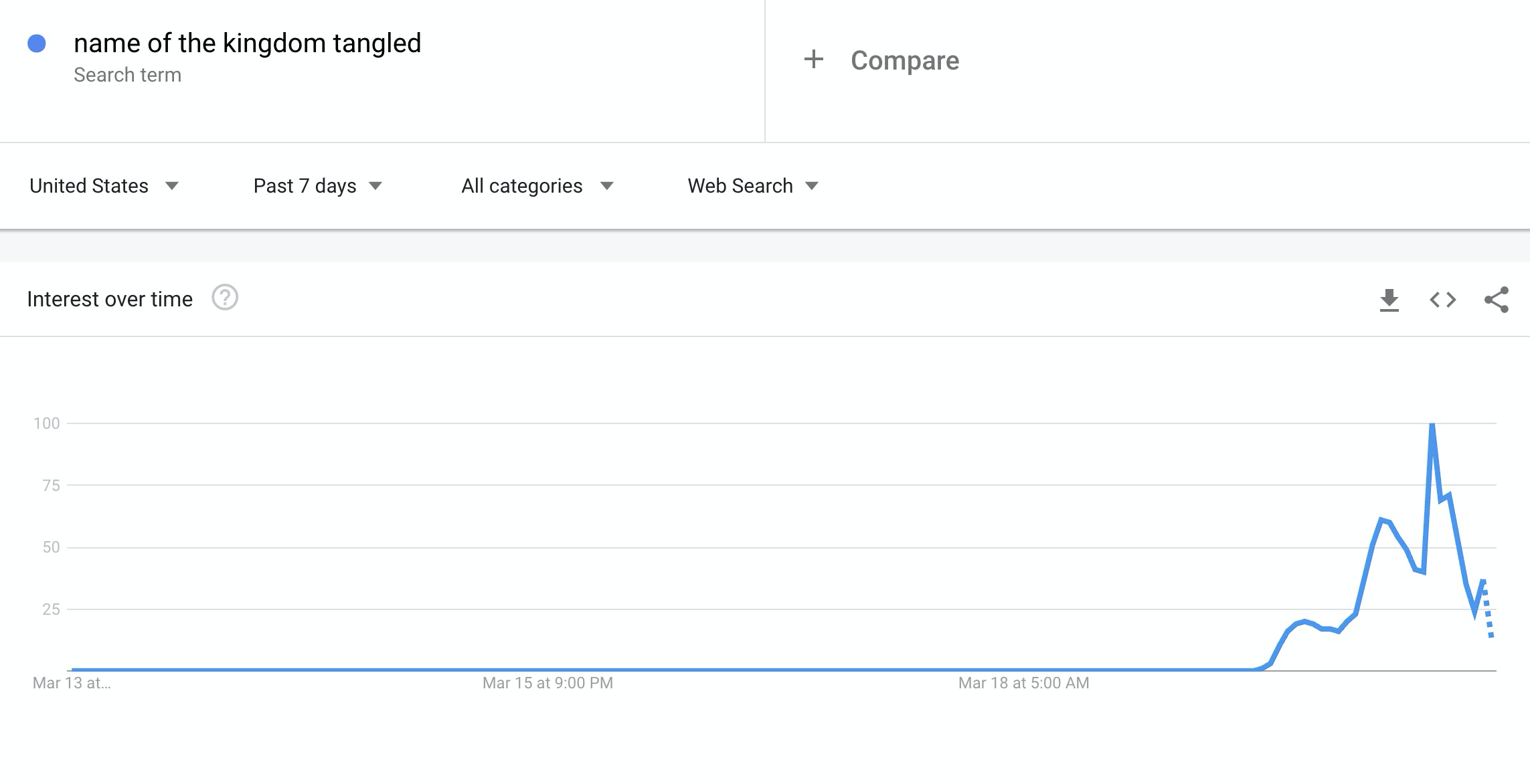 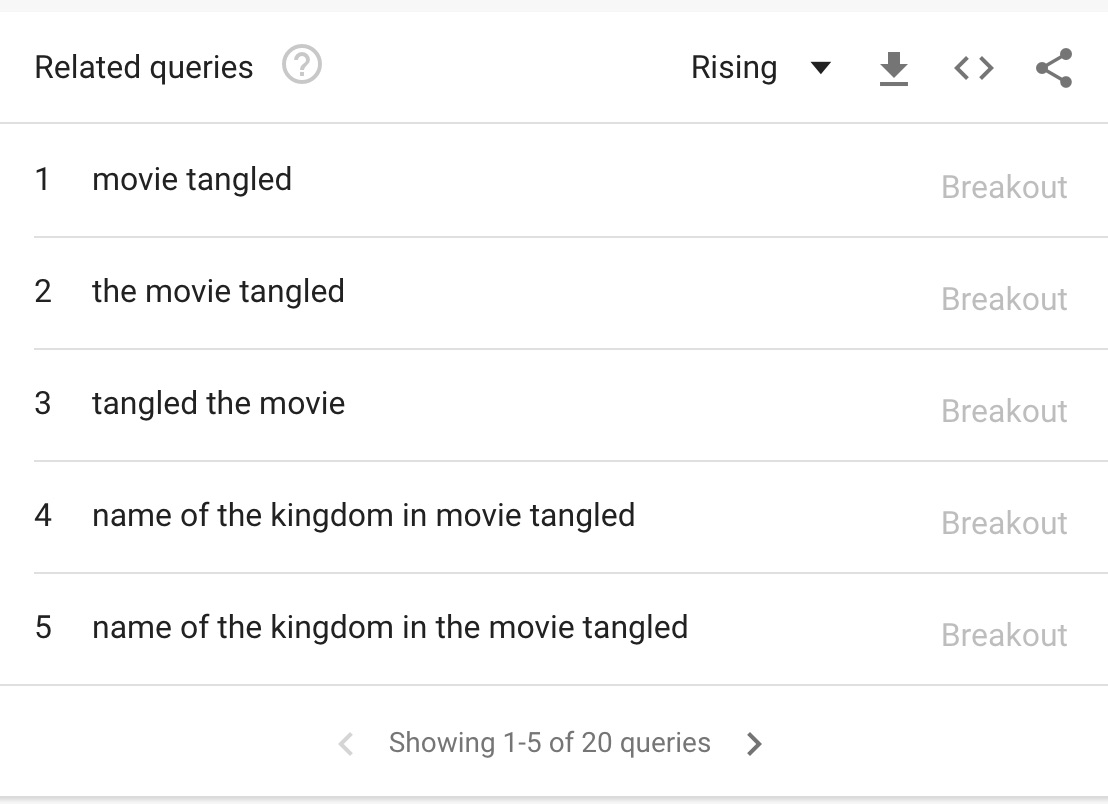 As to whether the memes were accurate, it seemed early on in their circulation, Disney fans hinted that Rapunzel’s circumstances were similar to quarantine — not that Rapunzel was explicitly quarantined. A synopsis from Wikipedia explained the premise of Tangled:

Long ago, a drop of sunlight fell onto Earth and grew a magical flower capable of healing illness, decay, and injury. For hundreds of years, the flower is used by a woman named Mother Gothel to retain her youth, until soldiers from a nearby kingdom of Corona, find the flower and use it to heal their ailing and pregnant queen. Shortly afterward, the Queen gives birth to a shockingly blonde Princess Rapunzel. While attempting to recover the flower, Gothel discovers that Rapunzel’s golden hair contains the flower’s healing properties. She tries to steal Rapunzel’s hair but discovers that cutting her hair destroys its power. Gothel instead abducts the baby and raises Rapunzel as her own daughter in an isolated tower. In order to keep Rapunzel content in the tower, Gothel lied about the outside world being dangerous and filled with bad people who will hurt her and take advantage of her magical capabilities. Gothel often left their tower to find gifts for Rapunzel, leaving the girl alone most of the time. Once a year, the King and Queen release sky lanterns on Rapunzel’s birthday, hoping for their daughter to see them and return.

According to the excerpted text, Rapunzel was kidnapped from her parents (the king and queen of Corona) by a woman named Mother Gothel, and isolated. That isolation was not a quarantine, but Gothel’s attempt to conceal her crime of kidnapping the princess.

On Disney.fandom.com’s Tangled summary, Rapunzel’s kingdom was described as “Corona,” and the events of the beginning of the film are explained:

That night [when Rapunzel was born], an already-aging Gothel sneaks into the palace and cuts a piece of Rapunzel’s hair to use instead of the flower. Though when she cuts it, the lock of hair turns dark brown. Gothel realizes that cutting Rapunzel’s hair causes it to lose its power, and so she kidnaps the princess, escaping out the window with her. Flynn’s narration explains that she locked her away in a hidden tower and raised her as her own child, having Rapunzel sing the healing song to restore Gothel’s youth. Every year afterward, on the princess’ birthday, the kingdom would release hundreds of flying lanterns as a symbol of hope that the lost princess would return to them.

A separate entry on the Kingdom of Corona explains:

Corona is an island kingdom and the birthplace of Rapunzel in Disney’s 2010 animated feature film, Tangled.

Initial memes claimed that in Tangled, Rapunzel was “isolated in a tower,” comparing her plight to quarantine. Later memes just said Rapunzel was “quarantined,” and her “mother was keeping her safe from Corona.” The latter explanation did not reasonably reflect the plot of the film. Rapunzel was kidnapped, trafficked, and isolated by her captor — not to “protect” her from “Corona,” but to prevent her parents (the rulers of the kingdom of Corona) from recovering her and in the process, disrupting Gothel’s spells. Although the kingdom was called “Corona,” it seems more accurate to say the risk to Rapunzel was her kidnapper, not her parents’ efforts to bring her home.

Finally, “Corona” in Latin (and Spanish, and Italian, and various other Latin-derived languages) means “crown,” which is a reference in the film to her royal status. With coronaviruses, the reference is to the characteristic spiked shape of the virus, making the perceived coincidence far less striking.