A video shows Rep. Ilhan Omar (D-Minnesota) partying and celebrating on the anniversary of 9/11 in 2019.

Ilhan Omar, a member of AOC Plus 3, will win us the Great State of Minnesota. The new face of the Democrat Party!

The same morning, the original tweet retweeted by the President was removed. But of course, that tweet had already been archived. It was sent by conspiracy theorist and “comedian” Terrence K. Williams on September 16 2019: 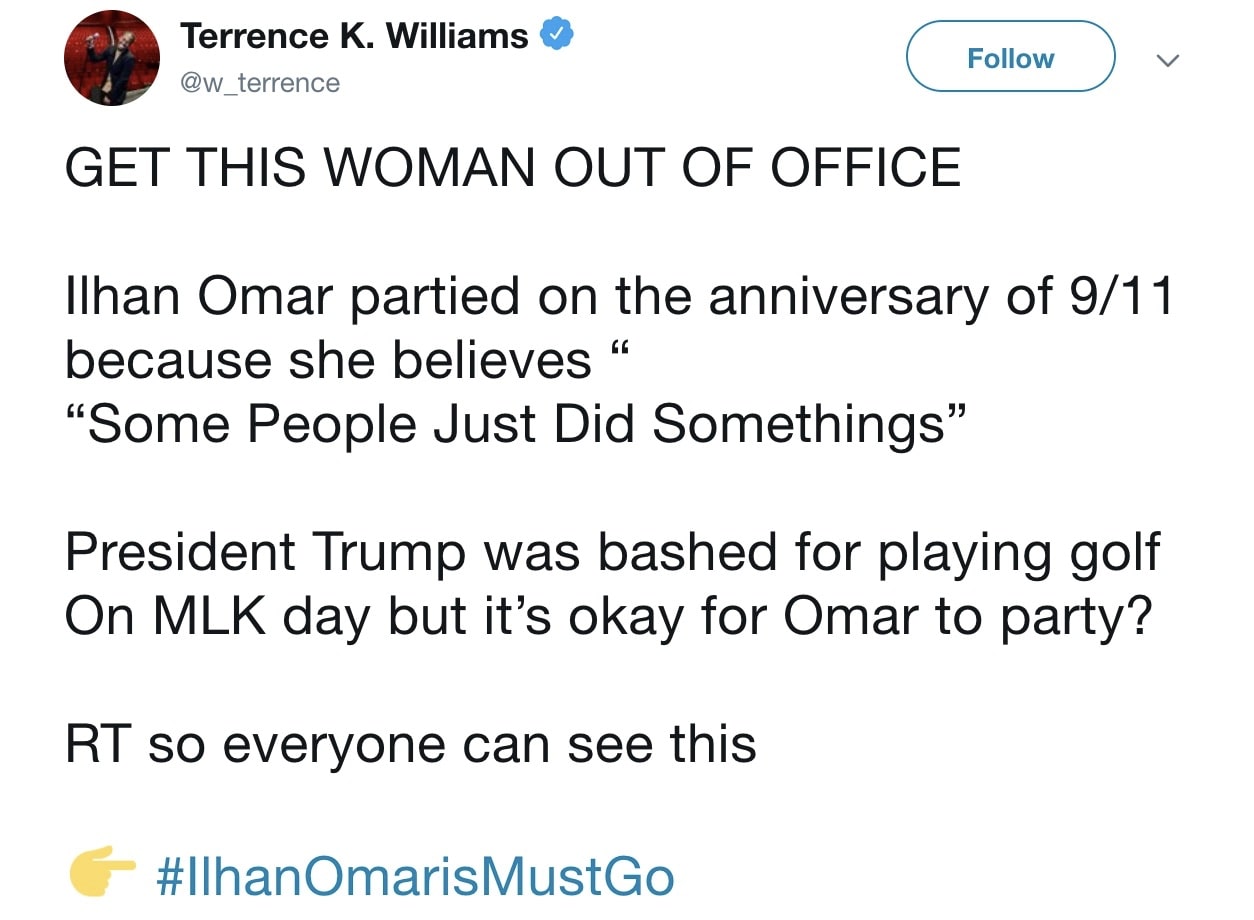 GET THIS WOMAN OUT OF OFFICE

“Some People Just Did Somethings”

President Trump was bashed for playing golf On MLK day but it’s okay for Omar to party? RT so everyone can see this

Can someone name something better than @IlhanMN dancing to @lizzo? Because I can’t think of anything. #CBC2019 #CBCWeek #cbcweekend pic.twitter.com/KvsCRvgKQX

Green used the tags “#CBC2019, “#CBCWeek,” and “#cbcweekend.” “CBC” appeared to stand for “Congressional Black Caucus,” and tweets posted the same day as Green’s appeared to show video of the same event. Another tweet advertised a CBC Week event for the evening of September 12 2019, the day after the 9/11 anniversary:

Omar herself responded directly to Trump on Twitter, noting the event was not held on September 11 2019:

This is from a CBC event we hosted this weekend to celebrate black women in Congress.

The President of the United States is continuing to spread lies that put my life at risk.

What is Twitter doing to combat this misinformation? https://t.co/XdkRVrU7mZ

CNN’s Jake Tapper tweeted a thread about the claim as it moved across Twitter, noting that the particular event Omar attended was on September 13 2019, not September 11. Green’s organization confirmed it took place on that date:

Our co-founder @AdamGreen posted this video from a CBC event on Sept 13, and @IlhanMN retweeted it. Today @realDonaldTrump tweeted that she "partied on the anniversary of 9/11." This is an abhorrent lie that endangers a Member of Congress. Twitter must remove Trump's Tweet now. https://t.co/zzeb1dXTzc