In July 2021, Rep. Matt Gaetz said if Democrats passed a voting rights bill, no Republicans would ever win an election again.

On July 18 2021, the Facebook page “Call to Activism” shared the following quote meme, claiming that Rep. Matt Gaetz (R-Florida) said that if Democrats pass “their voting rights bill,” then Republicans will “never win another election ever again”: 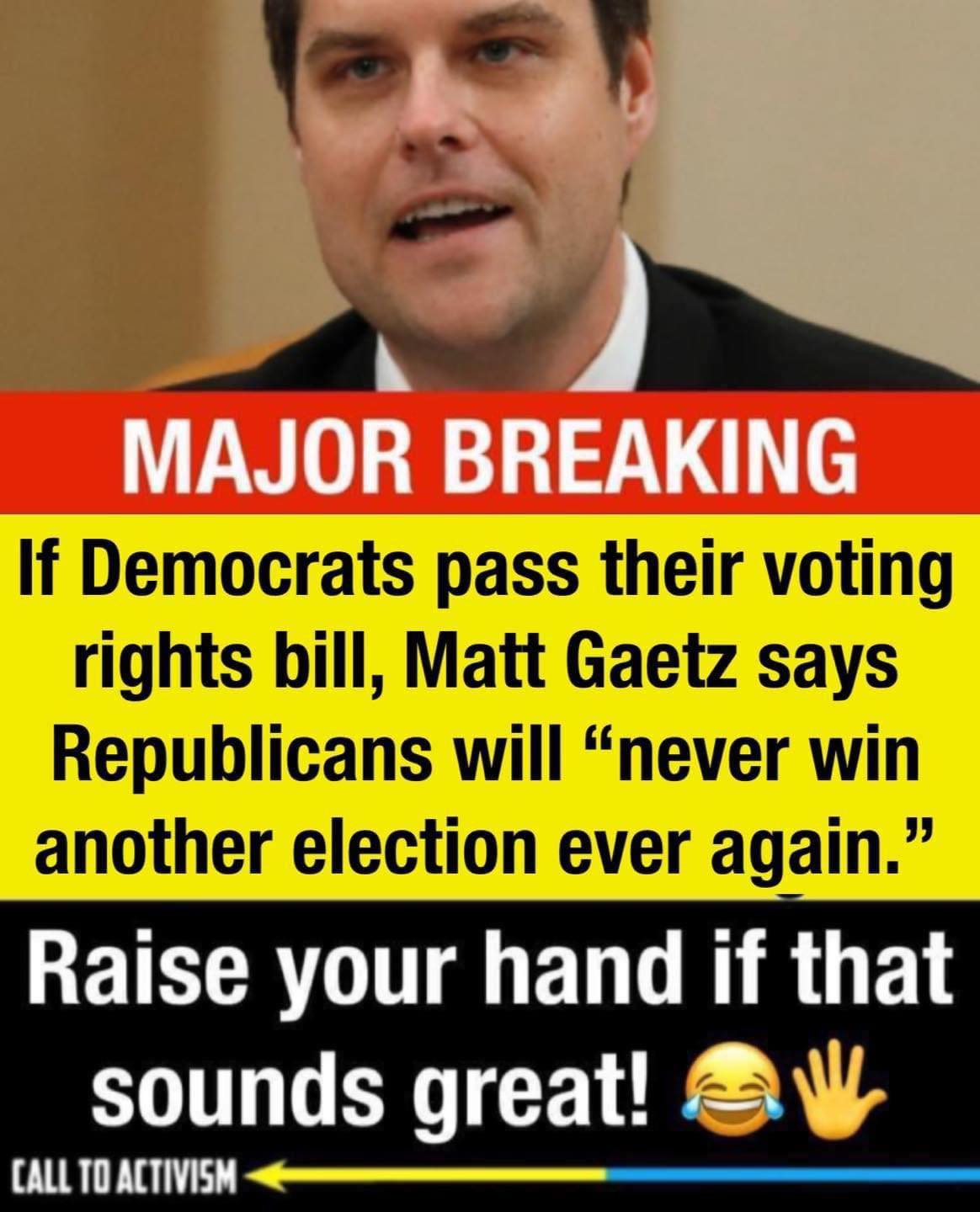 Underneath a photograph of Gaetz, text read:

Raise your hand if that sounds great!

No corroborating information accompanied the “breaking” post. To determine whether the meme was accurate, we searched for part of the phrase in quotes, restricted to material published on or after June 1 2021. No results were returned to match the quote in the meme.

The meme said, “if Democrats pass their voting bill,” an apparent reference to news about Democrats’ efforts to pass election-related legislation. One day after the meme appeared, Associated Press published “Senate Democrats take their case for voting bill to Georgia,” reporting:

Taking their case for a federal voting bill to Georgia, Senate Democrats argued at a field hearing on Monday [July 19 2021] that their sweeping elections measure is desperately needed to counter the impact of new GOP state laws that tighten voting rules.

“Congress must take action on voting rights, and we have no time to spare,” U.S. Sen. Raphael Warnock, a Democrat from Georgia, said in testimony before the Senate Rules Committee. “We Americans live in a great house that democracy built, and right now that house is on fire.”

Democrats used the rare field hearing in Atlanta to gain attention for their voting and elections overhaul, which remains blocked by unified Republican opposition and disagreement among Senate Democrats about whether to change procedural rules in the evenly divided Senate to get it passed.

In that article, Associated Press described an effort by Democrats to “overhaul” voting and elections, as well as “unified Republican opposition.” Subsequently, AP named the legislation:

The federal bill, known as the For the People Act, would create minimum voting standards in the U.S., such as same-day and automatic voter registration, early voting and no-excuse absentee voting. The bill would also change various campaign finance and ethics laws.

Republicans, though, have united in opposition, calling the bill a Democratic power grab and saying the changes amount to a federal takeover of elections, which are administered in the U.S. at the state and local level.

On June 23 2021, the AP published an explainer about the ongoing debate:

Senate Republicans have blocked debate of a sweeping overhaul of how elections are run in the U.S. The bill was pushed by congressional Democrats who argued it was needed to counter a spate of new GOP laws this year tightening voting rules in the states.

Republicans have long opposed Democratic efforts to overhaul elections in the U.S. and say the reforms being proposed are more about ensuring Democratic victories than fairness in voting. They note that Democrats introduced their overhaul two years ago, before the 2020 election, and say the massive bill amounts to a federal takeover of elections, which are run by state and local election offices. Congressional Republicans argue increased voter turnout in the 2020 election is proof that reforms are not needed. But, at the same time, their counterparts in state legislatures have pointed to unsubstantiated claims of voter fraud as justification for tightening rules and increasing election oversight at the state and local level.

The bill, known as the For The People Act, would create minimum standards for voting in the U.S. and establish Election Day as a federal holiday. It requires all states to offer automatic voter registration and at least 15 days of early voting. Some states already do this, but others do not. And Democrats argue that federal standards would reduce confusion among the public. They also say the standards would blunt the impact of new state laws creating barriers for voters.

House Resolution 1 (HR1) was originally introduced in January 2019, and it “died in committee” in March 2019. It was re-introduced on January 4 2021, where it passed in the House of Representatives.

Anyone who liked and shared the meme might reasonably infer that Gaetz made the statement as part of partisan discourse around the For the People Act in June and July 2021. A search for Gaetz and “Republicans will ‘never win another election ever again'” led to content such as a popular tweet; a similar Quora question was not dated, but the only answers supplied were in March 2021:

Matt Gaetz: "If HR1 passes in the Senate, Republicans will never win another election again"

Matt Gaetz: “If HR1 passes in the Senate, Republicans will never win another election again”

Once again, no news articles or other corroborating information accompanied the popular social media post. However, we did find a Fox News article published on November 30 2020 (“Gaetz warns Republicans will never win ‘another national election again’ if mail-in balloting persists”), which began:

“If we accept this universal mail-out balloting to people who didn’t even request ballots, I don’t think Republicans will ever win another national election again,” said Gaetz. “That’s why we have to stand and fight now.”

That same day, a Twitter user shared video of Gaetz’s appearance on Hannity:

“Republicans will NEVER win another election ever again- that is what is at stake..there are some Republicans ready to throw in the towel & fight for a future election, there IS NO future for the Rep. Party if we don’t stand & fight in this critical moment” pic.twitter.com/JayNP6GAcs

If we accept universal mail-out balloting to people who didn’t even request ballots, I don’t think Republicans will ever win another national election again.

That’s why we have to stand and fight now.

A popular July 18 2021 “Call to Activism” Facebook post claimed that if “Democrats pass their voting rights bill, Matt Gaetz says Republicans will ‘never win another election ever again,'” a meme shared during national discussions around the For the People Act and Democrats’ efforts to pass it. The meme was misleading in that Gaetz repeatedly made comments to that effect — however, it was not in the summer of 2021, but in the immediate aftermath of the November 2020 general election. Gaetz made remarks to that effect on November 6 and November 30 2020, sharing them to his Facebook page on December 2 2020. However, we found no indication he reiterated the remarks during discourse about the For the People Act in March 2021 (when the tweet appeared) or in July 2021 (when the meme was shared.) As such, we rate the claim Decontextualized.