On March 1 2022, an Imgur user shared a purported screenshot from Twitter, apparently showing a tweet by Rep. Matt Gaetz (R-Florida) about Russia’s invasion of Ukraine and a response: 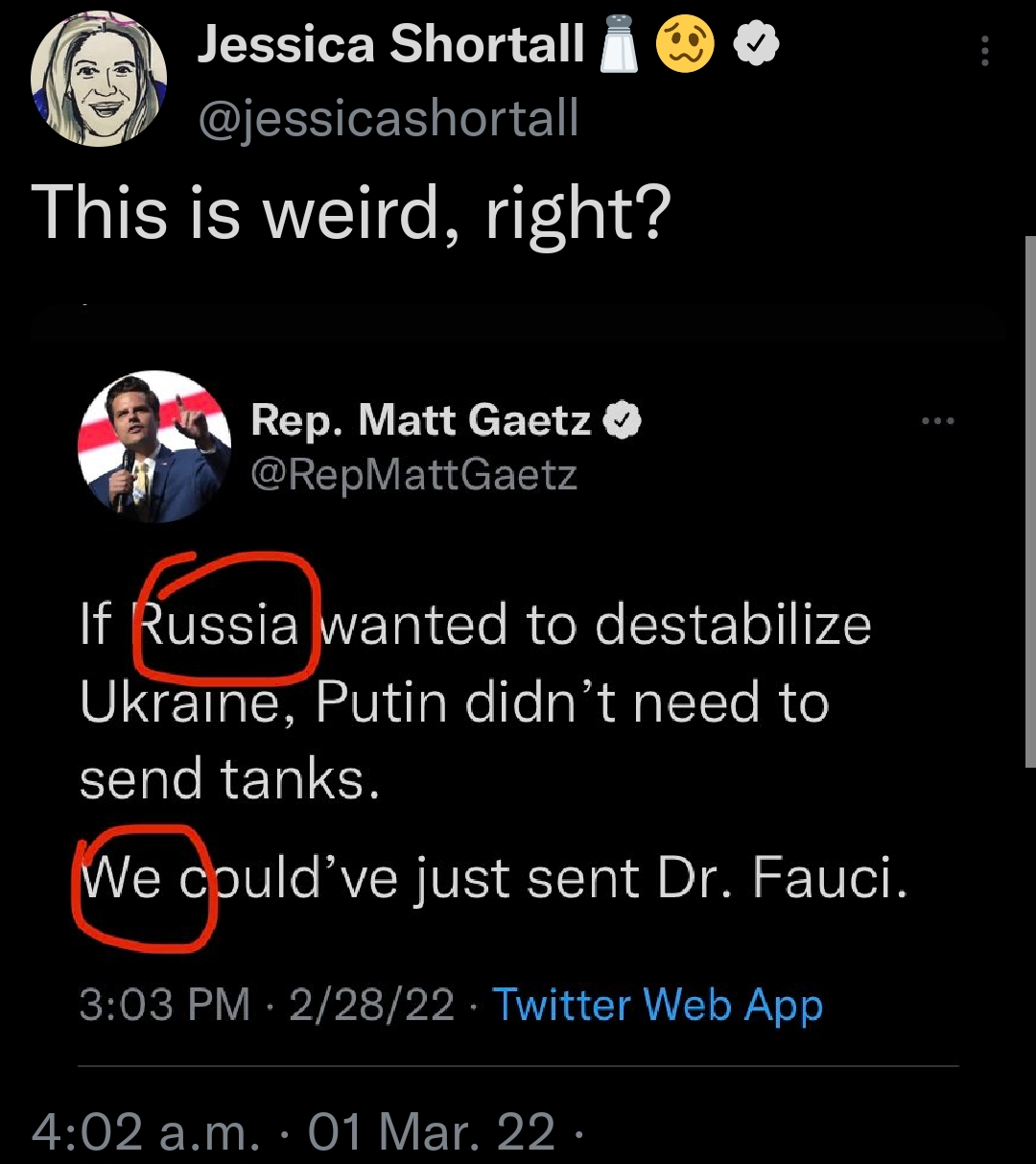 In the top tweet, author Jessica Shortall (@jessicashortall) commented: “This is weird, right?” Underneath her tweet, a tweet attributed to Gaetz was quoted; the words “Russia” and “We” were circled in red.

In the screenshot of Gaetz’s tweet, he began with “If Russia wanted to destabilize Ukraine,” concluding with “We could’ve just sent Dr. Fauci”; his usage of “we” in proximity to “Russia” being the highlighted part.

Commenters replied to the post, debating whether the inference was meaningful:

“So not “They could have just sent Dr. Fauci” “We” could have. Like Putin’s Russia and Trump’s GOP are on the same side. Telling language.”

“I dunno, the guy’s an asshole, but he clearly means “Americans.” Pronouns are inherently vague when you’re discussing multiple entities … No need to get creative and arbitrary about interpreting what they mean to score a “gotcha” wholly independent of what they intend.”

“Yeah. He’s saying “we” as in “we here in the US could have just sent…” Gaetz is a piece of shit for sure but this is weak.”

“True, but offering the idea of US actions to benefit Russian interests is weird. Yeah it’s just a bad joke, but that assumption is built in[.]”

“So I hate this dude with a passion. But this analysis is really stretching it. His grammar is correct here. Putin doesn’t have Fauci. We do. Thus, “we” could have sent Fauci is accurate.”

“How dumb do you have to be not to realize that this ‘joke’ aligns you with a dictator trying to destabilize democracy?”

Shortall’s tweet was real, tweeted early on the morning of March 1 2022. Gaetz’s tweet also existed; it was tweeted on the afternoon of February 28 2022:

A popular March 1 2022 Imgur post featured a real tweet by Rep. Matt Gaetz, in which he said if “Russia wanted to destabilize Ukraine … We could’ve just sent Dr. Fauci.” Commenters debated whether the tweet hinted at an allegiance to Russia, but intent was largely impossible to verify. In any event, the tweet was real, unedited, and correctly depicted.