In honor of Rosa Parks, the city of Birmingham, Alabama placed an advertisement on the back of a city bus.

On February 10 2022 an Imgur user shared the following meme, which purportedly showed an advertisement in honor of Rosa Parks — insensitively placed on the back of a bus in Birmingham, Alabama: 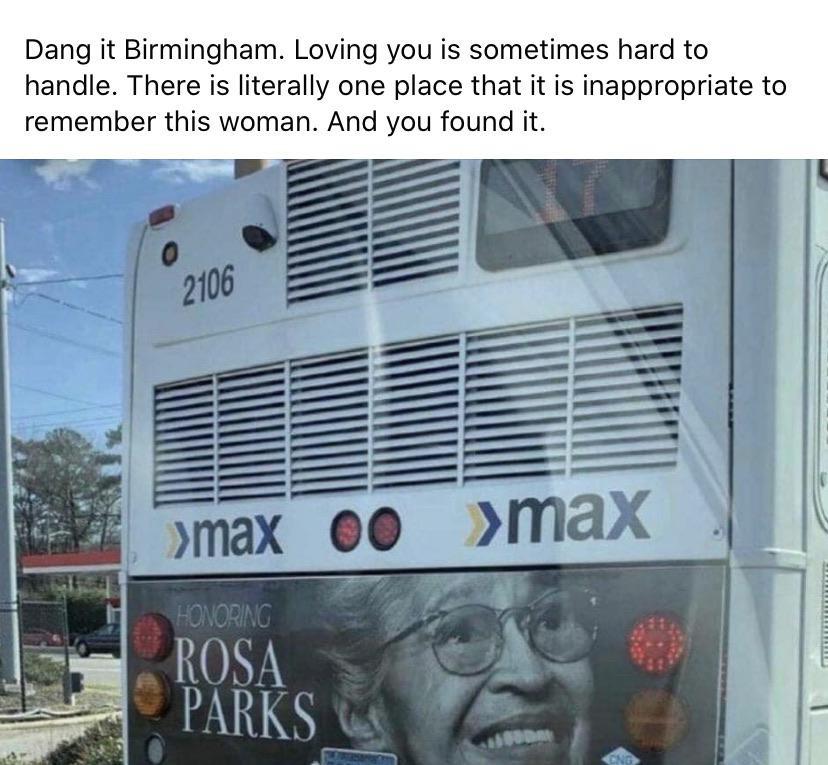 The back of a bus was visible in the meme, as was an advertisement reading “Honoring Rosa Parks”; Parks was a well-known figure in the American civil rights movement for her refusal to give up her seat on a bus to a white man. The text at the top of the meme read:

Dang it Birmingham. Loving you is sometimes hard to handle. There is literally one place that it is inappropriate to remember this woman. And you found it.

Parks’ act was part of the larger Montgomery bus boycott.

The roots of the bus boycott began years before the arrest of Rosa Parks. The Women’s Political Council (WPC), a group of black professionals founded in 1946, had already turned their attention to Jim Crow practices on the Montgomery city buses. In a meeting with Mayor W. A. Gayle in March 1954, the council’s members outlined the changes they sought for Montgomery’s bus system: no one standing over empty seats; a decree that black individuals not be made to pay at the front of the bus and enter from the rear; and a policy that would require buses to stop at every corner in black residential areas, as they did in white communities. When the meeting failed to produce any meaningful change, WPC president Jo Ann Robinson reiterated the council’s requests in a 21 May letter to Mayor Gayle, telling him, “There has been talk from twenty-five or more local organizations of planning a city-wide boycott of buses” (“A Letter from the Women’s Political Council”).

A year after the WPC’s meeting with Mayor Gayle, a 15-year-old named Claudette Colvin was arrested for challenging segregation on a Montgomery bus. Seven months later, 18-year-old Mary Louise Smith was arrested for refusing to yield her seat to a white passenger. Neither arrest, however, mobilized Montgomery’s black community like that of Rosa Parks later that year.

Parks refused to surrender her seat to a white man, but the protest also centered around the segregation of Black riders to the back of the bus. As such, placement of an advertisement “Honoring Rosa Parks” on the back of the bus was seen as missing the mark.

The image was not new in February 2022, and it appeared on Twitter in October 2020; we also found no fewer than three iterations from January 2020 on Reddit’s r/dankmemes, r/facepalm, and r/therewasanattempt.

Given Parks’ association with the phrase “back of the bus,” drilling down on the accuracy of the meme and its claims was tricky. On one of the Reddit threads, u/chromebaloney commented and asserted that the image was misleading:

Context – She IS on the side of the bus. Both sides and the back. The whole bus is a tribute to Rosa Parks’ legacy. Also, nearly all of the Max Transit board are African-American. Source: I live in Birmingham.

That comment provided a more specific search term, “Max Transit.” And a search for “Max Transit Rosa Parks ad” led to a Facebook statement from the agency, published on January 24 2020, “NOTICE REGARDING THE ROSA PARKS BUS WRAP.”

Birmingham-Jefferson County Transit Authority/ MAX Transit has received many concerns about a bus that was wrapped with Rosa Park’s picture and a quote on the back of the bus. Though we understand the concerns, the facts are:

• In 2018 Alabama lawmakers voted to designate December 1st as a day to honor Ms. Parks.
• BJCTA along with the Birmingham City Council decided to honor Ms. Parks for her service to humanity.
• A bus was wrapped with Ms. Parks’ picture and a quote on both sides and in the rear.
• A seat on the bus was dedicated in Ms. Parks’ honor and a flyer was also posted on the bus.
• BJCTA also participated in the “Rosa Parks Day of Service” at Fountain Heights Recreation Center.

BJCTA had no malicious intent regarding this matter and only sought to honor Ms. Parks for the civil rights icon that she is.

Max Transit included a photograph of the Rosa Parks bus wrap, demonstrating that it was not solely on the “back of the bus”: 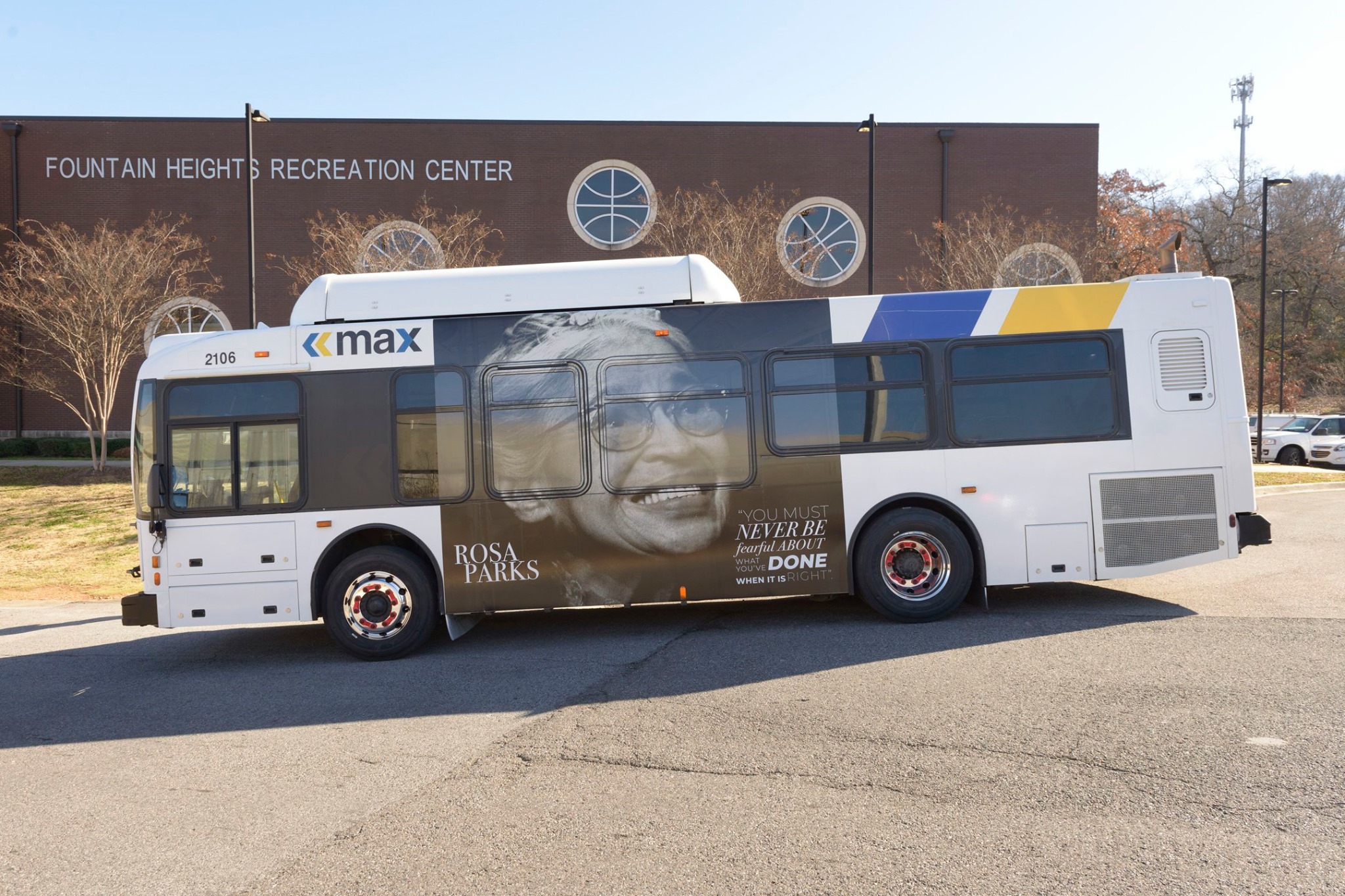 A February 2022 Imgur post appeared to show an advertisement honoring Rosa Parks, but injudiciously placed on the back of a bus. That image circulated in different memes from January 2020 onward. Birmingham’s Max Transit issued a statement about the virally popular image in January 2020, explaining that the “ad” was in fact part of a bus “wrap.” While Parks appeared on the “back of the bus,” bigger versions of the advertisement appeared on its side, too. As such, we rate this meme Decontextualized.