A photograph shows the aftermath of a May 2022 incident during which Russia's ambassador to Poland was covered in red paint by protesters.

On May 9 2022, three Imgur posts purportedly showed Russia’s ambassador to Poland after an incident in Warsaw in which protesters threw red paint at him: 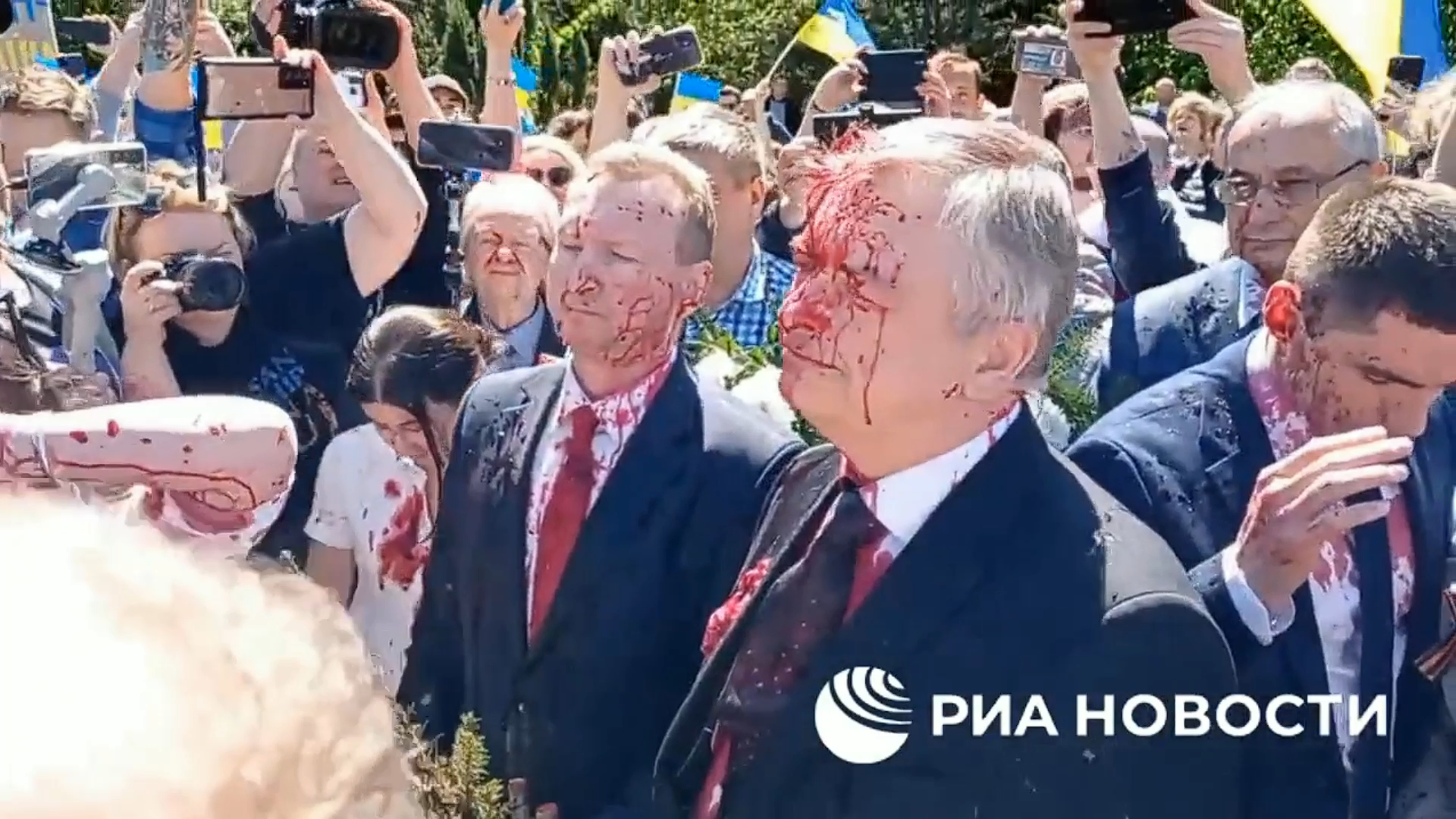 One of the three posts linked to a tweet featuring video of the purported protest in Warsaw; a station identification symbol seen in one of the Imgur posts appeared on the lower right corner of the image:

The Russian ambassador to Poland was attacked during an attempt to lay flowers at the cemetery of Soviet soldiers in Warsaw & doused with red paint pic.twitter.com/9l8i6q79do

On May 9 2022, Ukraine’s former ambassador to Austria Olexander Scherba tweeted video of the incident:

On May 9 2022, the Associated Press tweeted an image of the incident, briefly reporting:

Protesters opposed to the war in Ukraine threw red paint on Russia’s ambassador to Poland Sergey Andreev as he arrived at a cemetery in Warsaw to pay respects to Red Army soldiers who died during World War II. https://t.co/S2SMcPPvVx pic.twitter.com/8hgQutHGRK

Russia’s ambassador to Poland was splattered with red paint thrown at him by protesters opposed to the war in Ukraine, preventing him from paying respects on Monday [May 9 2022] at a Warsaw cemetery to Red Army soldiers who died during World War II.

Ambassador Sergey Andreev arrived at the Soviet soldiers’ cemetery to lay flowers on Victory Day, which marks the defeat of Nazi Germany by the Allies. The major Russian patriotic holiday was celebrated with pomp in a parade at Red Square in Moscow.

CBS News’ “Russian Ambassador Sergei Andreev doused with red paint by protesters in Poland”  reported that the Russian ambassador quickly fled the scene, and that Poland’s government discouraged him from visiting the site in the first place:

When the delegation led by Russian Ambassador Sergei Andreev appeared at Warsaw’s Mausoleum Cemetery, hundreds of protesters opposed to Russia’s war in Ukraine greeted them with shouts of “murderers” and “fascists.” While Andreev was stuck in the crowd, two bags of red paint hit him in the head, first from behind, then directly in the face.

The demonstrators then prevented him from laying flowers and a memorial wreath for the Russian Embassy cameras. Andreyev and his delegation quickly returned to the car.

Russian Foreign Ministry spokeswoman Maria Zakharova denounced the attack, saying on her messaging app channel that “we won’t be scared” while the “people of Europe should be scared to see their reflection in a mirror.”

But Poland’s current interior minister noted that Poland’s government had advised the Russian ambassador against laying flowers at the cemetery.

Reuters’ coverage included commentary from witnesses who were present for the incident, and reporteed that the Russian foreign ministry “demanded that the Polish authorities [facilitate] a new wreath-laying ceremony immediately after the incident forced the suspension of the original plan”:

Earlier in the day the words “Kill Putin” were found written in blue and yellow, the colours of the Ukrainian flag, on a monument at the cemetry [sic], private broadcaster TVN24 reported. The writing was later removed.

One protester interviewed by TVN24 said it was good that the ambassador had been covered in red.

“With all our heart we are with Mariupol,” she said, referring to the southeastern Ukrainian city that has been devastated by the war.

On May 9 2022, images of Russia’s ambassador to Poland covered in red paint circulated on social media. Contemporaneous reporting confirmed that the envoy (Sergey Andreev, also spelled “Sergei Andreyev”) was splattered with red paint by protesters in Warsaw as he attempted to lay a wreath at a memorial for Russian war dead.