"The 'sea cat' that until the mid-20th century, traveled on boats to take care of rats and rodents, had passports and signed with the paw."

Think “working cats” is a new thing? Think again! #Cats have been helping humans with pest control for ages! Are you looking for a feline to hire? Our friends at @ShadowCatsTNR have #workingcats looking for room and board in exchange for their expert mousing! #harfordcounty pic.twitter.com/J0HuexVYV2

At the beginning of the 20th century, cats that traveled on boats to get rid of the mice and rats had passports signed with their paws from mildlyinteresting

The earliest 2021 Facebook iteration we located was shared on June 30 by a fishing charter company. That post did not appear to be the first version of this particular story, however, as the transcribed status update reflected the fact that many versions involved a “see translation” Facebook notice (and the post also included typographical errors):

The ′”sea cats ′′ that until the mid-th century, traveled on boats to take care of rats and rodents, had passports and signed with the paw

Most renderings of the commonly-shared post text read as if it had been translated by AI on social networks, and we were unable to find a version in French shared prior to the June 30 2021 post linked above. However, “sea cats” (not to be confused with otters) warranted mention for years before the “sea cats had passports” meme.

Rats can be a major problem on ships, which have historically sailed with at least one cat on board for that very reason; rats are known to carry plagues and destroy valuable cargos, and their numbers can be difficult to control.

In 2014, Gizmodo’s article “These Are the Brave and Fluffy Cats Who Served in World War I” explained:

Throughout the “war to end all wars,” cats were a common sight in the trenches and aboard ships, where they hunted mice and rats. Beyond their “official” duties, they were also embraced as mascots and pets by the soldiers and sailors with whom they served.

An estimated 500,000 cats were dispatched to the trenches, where they killed rats and mice; some were also used as gas detectors. At sea, cats had the run of the ship — a tradition dating back thousands of years.

Sailors and cats have a special relationship that dates back thousands of years. The ancient Egyptians likely were the first seafarers to realize the true value of having cats as shipmates. In addition to offering sailors much-needed companionship on long voyages, cats provided protection by ridding ships of vermin. Without the presence of cats, a crew might find their ship overrun with rats and mice that would eat into the provisions, chew through ropes, and spread disease. Superstitious sailors believed that cats protected them by bringing good luck. Others thought that the keen eyesight of cats would help guide them in a shipwreck at night, because a cat can more easily detect distant lights. It was also common for crews to adopt cats from the foreign lands they visited to serve as mascots as well as reminders of their pets at home.

One Reddit user commented with a broader source and context for the image via Getty Images. Getty featured a video titled “Cat Gets Honorary Coast Guard Title,” dated February 11 1943. Additional text appeared to describe the events in the short clip:

As for the photograph seen in the social media posts about sea cats and their passports, it appeared as one of several elements in a microfiche copy of the January 15 1943 New York Times: 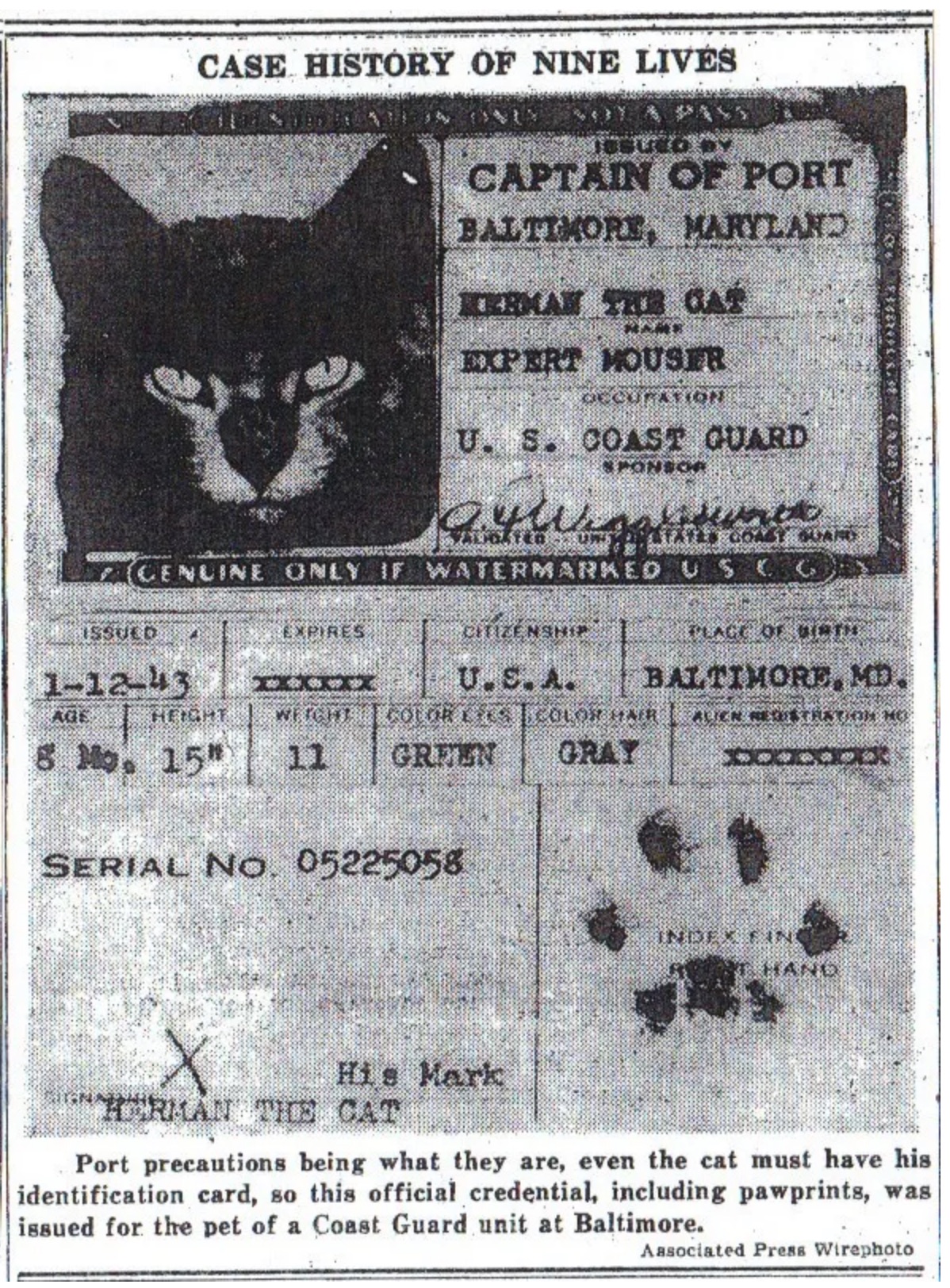 In what appeared to be a touch of journalistic levity, the same image was labeled “Case History of Nine Lives.” It indicated an issuance date of January 12 1943, United States citizenship, an “X” for a signature, and a paw print where a fingerprint would have gone.

A caption included text at the bottom explaining the precise circumstances under which Herman the Cat (title: “Expert Mouser”) was issued his credential:

Port precautions being what they are, even the cat must have his identification card, so this official credential, including pawprints, was issued for the pet of a Coast Guard unit at Baltimore. (Associated Press Wirephoto)

“Herman the cat” and claims that “sea cats” had “passports” apparently originated with a post in French (automatically translated). Text at the bottom of the circulating image was (accidentally or purposefully, often but not always) removed, and that text indicated that “Herman the Cat, Expert Mouser” was issued an “official credential,” not a passport. Moreover, that early “odd news” item made it clear that the document was issued for “the pet of a Coast Guard unit,” not that all sea cats required passports.