Sea urchins wear hats if hats are provided for them.

An August 25 2021 Facebook post about sea urchins wearing hats (shared to the group “Heck this is super wholesome”) featured a screenshot of a November 22 2020 tweet by @valfrogkamen:

sea urchins protect themselves by putting rocks and shells on their "heads" so apparently if u give them tiny hats they will put them on and wear them pic.twitter.com/6antYfDKNb

Alongside four images of sea urchins in hats of a broad variety (a fedora, a cowboy hat, and a viking helment), the tweet charmingly claimed that “sea urchins protect themselves by putting rocks and shells on their ‘heads’ so apparently if u give them tiny hats they will put them on and wear them.” Both the tweet and Facebook post were shared thousands of times; however, neither included additional information about marine haberdashery.

Google Trends 30-day data for “sea urchins hats” demonstrated a spike of searches on August 22 2021 (before the Facebook post appeared), but did not include indication of why searchers suddenly became interested in the topic. A search restricted to the seven-day period ending August 26 2021 returned two separate candidates for interest in sea urchins wearing hats.

If you give sea urchins tiny hats, they will wear them from UnexpectedlyWholesome

A likelier candidate for advancing interest in the topic was an Imgur gallery shared on or around August 22 2021 titled “Sea Urchin Hats.” Once again, sea urchins in hats were presented as a “fun fact,” but no additional information about the images or sea urchins’ behavior was included with the post.

The first image in the set was of the tweet above, and the post included 22 additional images — most of which were individual sea urchins in hats, but with some images of sea urchins in ersatz head coverings like golf balls or shells: 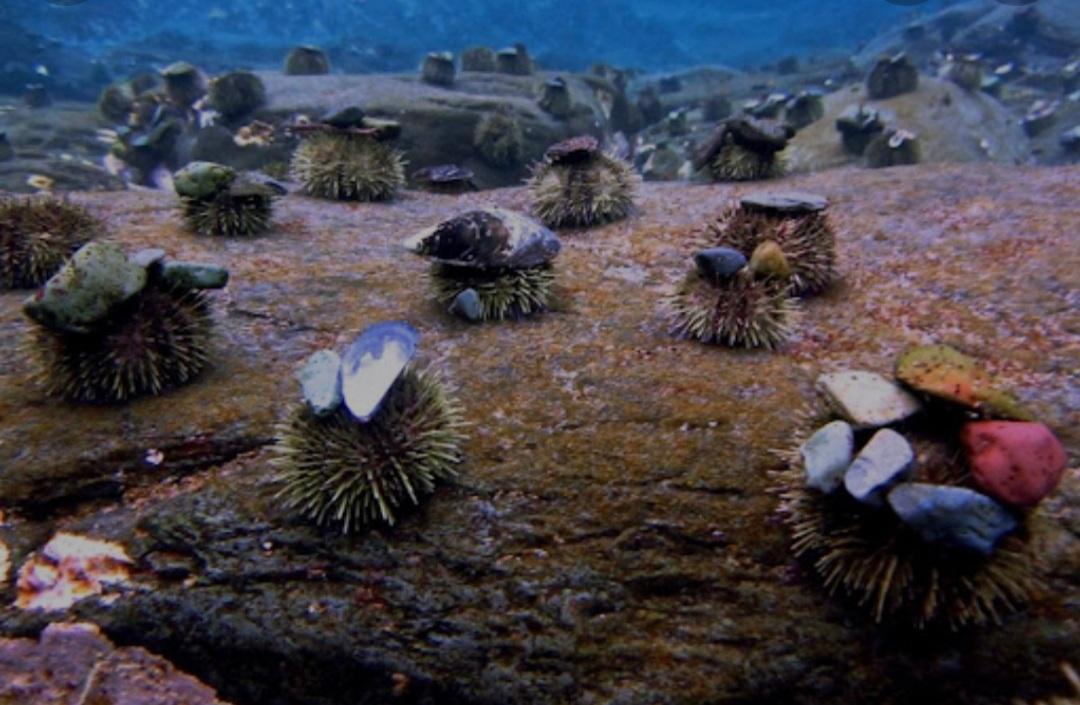 Although the tweet appeared in November 2020, it wasn’t the first discussion of sea urchin hats on social media. In June 2016, a Reddit user on r/Aquariums shared an image with a similar theme:

Many of the images featured in the August 2021 Imgur post were featured in a March 2017 blog post about the subject, which read in part:

There’s lots to see while SCUBA diving the North Atlantic coast; long-toothed wolffish, scowling eelpouts, graceful winter skates, fields of magenta coralline algae, and if you’re lucky, a glimpse of a humpback whale in the distance. In all that diversity, the sea urchins are some of my favourites – and it’s all about the hats. ​

The most common urchin in Newfoundland, and throughout the Maritimes, is Strongylocentrotus droebachiensis, a bit of a mouthful for the unassuming green urchin. We see hundreds of green urchins on every dive, and in the shallows, we find them covered with anything they can get their tube feet on: rocks, shells, even the odd golf ball.

An August 2020 post to r/crafts provided at least one of the images later seen in circulating social media posts. In it, original poster u/VanillaBean5813 responded to a question about what the sea urchins did before getting hats, explaining that they “would pick up shells or small coral, which was damaging to the coral babies”:

When the image (and others) was reposted by a different user to r/interestingasfuck on November 22 2020, u/VanillaBean5813 commented:

I was today years old when I learned that sea urchins naturally use shells as hats for camouflage, so some aquarists had the genius idea to make them tiny hats from interestingasfuck

Those are my urchins! They still have their hats. Actually one urchin has taken both hats like a selfish jerk.

Some people were asking how my sea urchins pick up their hats so here’s a video of one picking up a sombrero and carrying it away using his tube feet! Sped up 8x from BeAmazed

Social media posts, many of which linked back to original content from u/VanillaBean5813, demonstrated myriad examples of documentary proof of sea urchin hats. As it happened, additional information on sea urchin hat wearing emerged due to the many popular images and the November 2020 tweet.

By the end of her research, Emma came to a conclusion that “different species may cover for different reasons, even that it might confer a number of benefits (such as UV, camouflage, or ballast) simultaneously to varying degrees.”

When it comes to tiny hats for sea urchins, Emma said: “I think the 3D hats are a fun idea, a great talking point, and a way to educate people as to the complex ecology of sea urchins … I honestly don’t see that they could do any harm in an aquarium setting.”

Having said that, Emma was wondering if they “will confer an actual benefit—this is the most interesting and also the most complex of your questions.”

Souza was initially prompted to craft urchin hats by scientific curiosity, after observing behavior that pointed to a possible explanation for why his urchins kept picking up objects to cover parts of their spiny bodies.

“I noticed at night they would let go of some of the stuff they carried during the day,” Souza told Newsweek. “I started wondering if it has anything to do with the full spectrum lights that we use for corals. I shared it with my wife Sylvia, who said, ‘Well, if they are trying to protect themselves from the UV rays, then why don’t you design and 3D print some hats for the poor little things?'”

Souza’s hypothesis has been borne out by scientists, including Verling …

… But Verling cautioned against a simple explanation for the surprising and complex behavior, especially since multiple sea urchin species cover themselves, including deep sea species who aren’t subject to UV light. Instead, she described the behavior as likely “multifactorial,” citing other potential explanations validated by research into different urchin species, including protection or camouflage from predators and ballast against surging ocean currents.

“I saw them covering with all sorts of things over the years: shells, stones, bits of macroalgae, bottle tops and pieces of wood,” Verling said. “It would appear to be an energetically costly thing to do, and that’s why it’s so interesting to study it.”

An August 2021 Facebook post about sea urchins wearing hats featured a viral November 2020 tweet about the observed tendency in sea urchins. Experts (and aquarium enthusiasts) validated that sea urchins’ hats were part of “covering” behavior, but no individual explanation (such as sun protection) exists for why sea urchins wear “hats.”