Since 1980, California has built 22 prisons and only one university.

On February 22 2021, an image was shared to both r/pics and Imgur, which contained the claim that the state of California has built 22 prisons, but only one university, since 1980:

A sense of priorities from pics

On Reddit, the most highly-upvoted comment correctly observed that only 21 orange jumpsuits were visible in the image, and the first response replied:

They’d be able to count if there were enough universities.

Text on the image above the 21 orange jumpsuits and one graduation gown read:

At the bottom right corner, partly visible text included an asterisk and the word “UNIVERSITY,” alluding to further context not available in the photograph. Neither a source nor a date appeared on either version.

A search of content publicly shared to Facebook returned several shares of the image seen on Reddit and Imgur, one of which showe the same exhibit captured from a different angle: 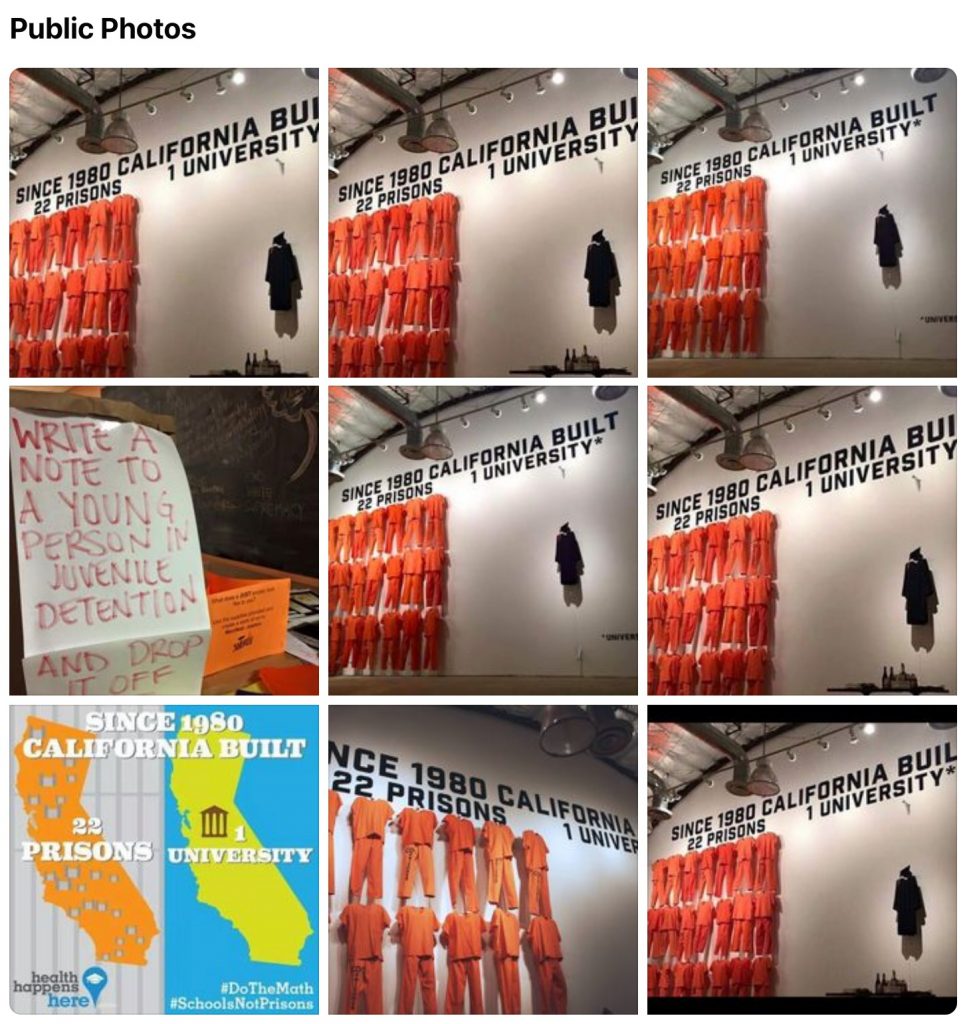 Two of the posts provided a broader date range, as they were posted in May 2015:

Another image was in the style of an infographic; that one was shared in September 2014: 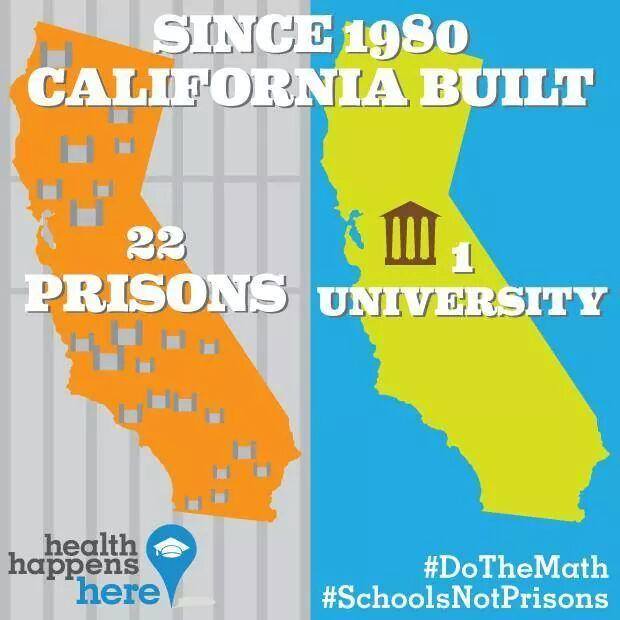 It was possible the infographic-style image circulating in 2014 inspired the art exhibit image shared from 2015 onward. In a fashion similar to the concurrently-spreading Reddit and Imgur posts on February 22 2021, nearly identical posts were shared to Imgur and Reddit’s r/pics (both titled “Priorites” [sic]) on October 18 2015:

A May 7 2015 KNBC article reported on an active exhibition of more than 200 works of art (Manifest Justice) — of which the “22 prisons and one university” piece was a part. That article provided a small sliver of additional context about the viral photograph:

A Baltimore streetscape undertaken recently by Logan Hicks evokes the ride in a police van after which Freddie Gray died [in April 201]. A room divided in half depicts a classroom on one side, and a prison cell on the other.

The piece is entitled “Do the Math,” and the writing on the wall reports that maintaining the cell costs California $62,300 per year, dwarfing the $9,100 spent on the classroom.

In a similar vein, another display contrasting graduation mortar boards with prison jumpsuits counts 22 prisons built in California since 1980, but only one new campus (Merced) of the University of California.

(Incidentally, a gallery image from the 2015 Manifest Justice exhibit showed that the twenty-second jumpsuit was visible on the far left of the piece, cut off in the viral version circulating from 2015 through 2021.)

A May 13 2015 Daily Banter post (“Art Exhibit Perfectly Captures the Insanity of America’s Criminal Justice System,”) about the singular work of art from the larger Manifest Justice installation, elided that context from the KNBC reporting and amplified the subsequent claim:

When you design an economy to be based on short term profit to the benefit of giant corporations, the results over the long term will be a country so hostile to human life that the unreasonable and unthinkable becomes an every day reality. Wealth inequality, mass poverty, a crumbling welfare state aside, the prison system perfectly illustrated the madness of the American capitalist system. Since 1980, the state of California has built 22 prisons and only one university. Rather than invest in education, the state spends its precious dollars (around 7% of its budget) on locking people up and renting them out as cheap labor.

This sobering statistic displayed in an art exhibit at ‘Manifest Justice’, a creative community exhibition in Los Angeles [in May 2015.]

In April 2017, a poster to StackExchange’s “skeptics” forum asked fellow users if it was true that California had built 22 prisons and one university since 1980. One reply linked to an August 2013 Huffington Post article that began with a more nuanced version of the claim:

California has built 23 prisons since 1980. In the same period, the University of California system has opened one new campus. And although California’s prison population has declined in recent years, the state’s spending per prisoner has increased five times faster than its spending per K-12 student in the last two decades.

An undated correction indicated that the article originally provided a figure of 21 new prisons, and language clarifying the scope of new universities was added:

Correction: California has opened 23 prisons since 1980, not 21: They include a woman’s prison that was deactivated in 2003 and a health care facility that opened in Stockton last month. Language has also been amended to indicate that the article is considering the University of California system, and not the California State University system.

Another StackExchange post pointed to two 2012 Business Insider articles, from June and April respectively. The June 2012 piece, “The US Wastes Tons Of Money Keeping Harmless Old People In Jail,” stated in part:

California, a state that has has built one college campus and 21 prisons since 1980, has 27,680 aging prisoners while the ACLU’s economic analysis found that releasing aging prisoners would save states an average of $66,294 per year per prisoner. (For comparison, the average U.S. household makes about $40,000 a year in income).

Business Insider’s citation for that claim was an April 2012 story (“13 Signs That America’s Prison System Is Out Of Control.”) However, it referenced only an off-site graph with the following label:

Since 1980 California has built one college campus and 21 prisons

A linked source for the statistic was a February 2009 blog post about California’s finances. We were unable to find the original source (or date) for the graph on that page.

From that angle, the claim about California having built 22 (or 23) prisons to one university between 1980 and 2009, 2012, 2014, 2015, or 2021 appeared to have been something of a “game of telephone” statistic, its provenance laundered through every variation and enshrined in a 2015 art piece destined to go repeatedly viral.

In October 2017, PolitiFact addressed a version of the claim from a different angle, due to an iteration of it being mentioned by gubernatorial candidate Delaine Eastin on Capital Public Radio that month.

PolitiFact’s claim statement was slightly different, as Eastin referenced a different year — 1965 — and six college campuses to the image’s one university:

PolitiFact rated the claim false, indicating that California had built 23 prisons since 1965 and adding:

A glance at the history of the UC and CSU systems shows Eastin is again correct, at least on this portion of her claim: The University of California at Merced opened in 2005, the lone campus in the 10-campus UC system added since 1965.

Meanwhile, the state has constructed three California State University campuses during this period: Cal State San Marcos in 1990, Cal State Monterey Bay in 1995 and Cal State Channel Islands in 2002. They are the newest additions to the 23-campus CSU system.

We found, however, a glaring error on Eastin’s count of community colleges.

There have been 41 of those campuses built since 1965 — not the two she claimed in the radio interview. That’s according to a list on the California Community Colleges Chancellor’s Office website.

The site noted that “a look at campus data shows the California community college system has significantly slowed its pace of construction,” and included Eastin’s source for the claim — having “heard the number from someone”:

Eastin’s spokesman Jon Murchinson acknowledged the inaccuracy of the community college statistic — a figure that greatly throws off her “six colleges” to “23 prisons” comparison.

He told PolitiFact California it was “an error in good faith as (Eastin) had heard the number from someone,” and that she “regrets using it without verifying the source.”

He said she won’t be using it in the future.

In a section titled “Our Ruling,” the site added:

But she was way off the mark on colleges: California has opened 41 community colleges, three California State University campuses and one University of California campus for a total of 45 campuses since 1965.

Since its emergence at the “Manifest Justice” exhibit in Los Angeles in May 2015, a striking photograph of 22 orange jumpsuits and one graduation gown has repeatedly spread on social media, and contained an attached claim that the state of California had built 22 prisons and one university “since 1980.” A barely noticeable asterisk hinted at additional context, and iterations of the claim circulated at least as far back as a blog post in 2009. However, the evocative work of art led users to draw a misleading conclusion — although the University of California only added one campus after 1980, dozens of other colleges, community colleges, and private institutions were opened in California after the year 1980. As such, we rate the claim Mixed.