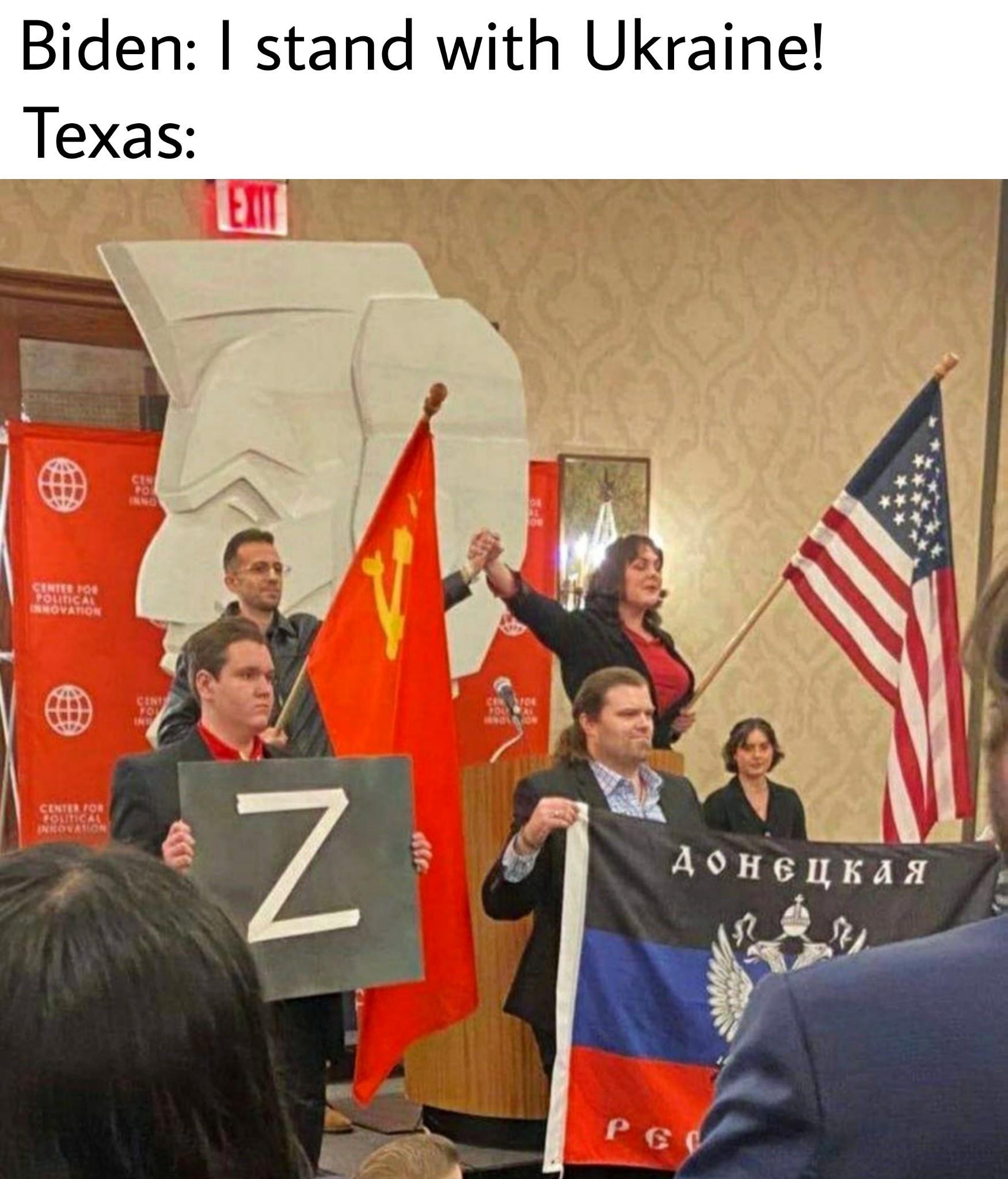 Titled “Deplorable,” the post showed five individuals, a Soviet flag, a man holding a “Z” placard, and another flag. Text appended to the image suggested that it showed Texans supporting Russia’s invasion of Ukraine (because U.S. President Joe Biden opposed it):

Biden: I stand with Ukraine!

Commenters were unclear on the context of the image, responding:

“Wait. Are these the damage eye-pleasing mocking basic healthcare and mask mandates as communist while simultaneously supporting the USSR?”

“Why is the Soviet flag there? Are they just trolling or are they serious?”

“US definition of treason: Levying War against the United States, or in adhering to its Enemies, giving them Aid and Comfort.”

A reverse image search was not initially helpful in identifying the location, date, or context of the photograph. All three results led back to Imgur, including a separate March 13 2022 post lacking the “Biden …” text.

The older version included a caption, which again did not really provide any additional context:

An action in Texas in support of Russia’s special operation in Ukraine.

A separate search led to a thread on Reddit’s r/tankiejerk, featuring a screenshot of a March 13 2022 tweet by @medicalmomentum (Dr. Ryan L Cotten). Their tweet provided a little more context:

CPI opening ceremony with Soviet and American flags with The Internationale and The Star-Spangled Banner playing in the background before the unvailing of the Donetsk People's Republic flag! Proud to be apart of this historic day! pic.twitter.com/xNdOMhatLt

On March 13 2022, the Facebook page “Center for Political Innovation” (CPI) shared the image with an identical caption, typographical errors included:

CPI opening ceremony with Soviet and American flags with The Internationale and The Star-Spangled Banner playing in the background before the unvailing of the Donetsk People’s Republic flag!

Very little information about the “Center for Political Innovation” was available from outside sources, and its internet presence was both sparse and new. Its Twitter account was created in December 2021, and user Caleb Maupin’s account indicated he was its founder; Ryan Cotten also has a byline at the site.

The Center for Political Innovation is an educational think tank focused on the construction of American Socialism[.]

A popular March 14 2022 Twitter post suggested that “Texans” flew Soviet flags as a response to United States President Joe Biden’s support for Ukraine. The image was shared on March 13 2022 by the “Center for Political Innovation,” an “educational think tank focused on the construction of American Socialism.” The event does appear, however, to have been held in Texas.