In November and December 2020, following Donald Trump’s resounding loss by millions of votes in the presidential election to Joe Biden, rumors spread by those trying to cope with their loss centered around persistent and increasingly ludicrous conspiracy theories that centered around claims that U.S. Army Special Forces faced off against the Central Intelligence Agency over a purported “CIA server farm” in Frankfurt, Germany.

It is difficult to pin the viral claims to one particular source, but mentions of the CIA vs. Special Forces story proliferated on sites like TheDonald.win, Parler, and Reddit’s r/conspiracy. Google Trends indicated that searches for “Dominion Frankfurt CIA” spiked on December 2 2020: 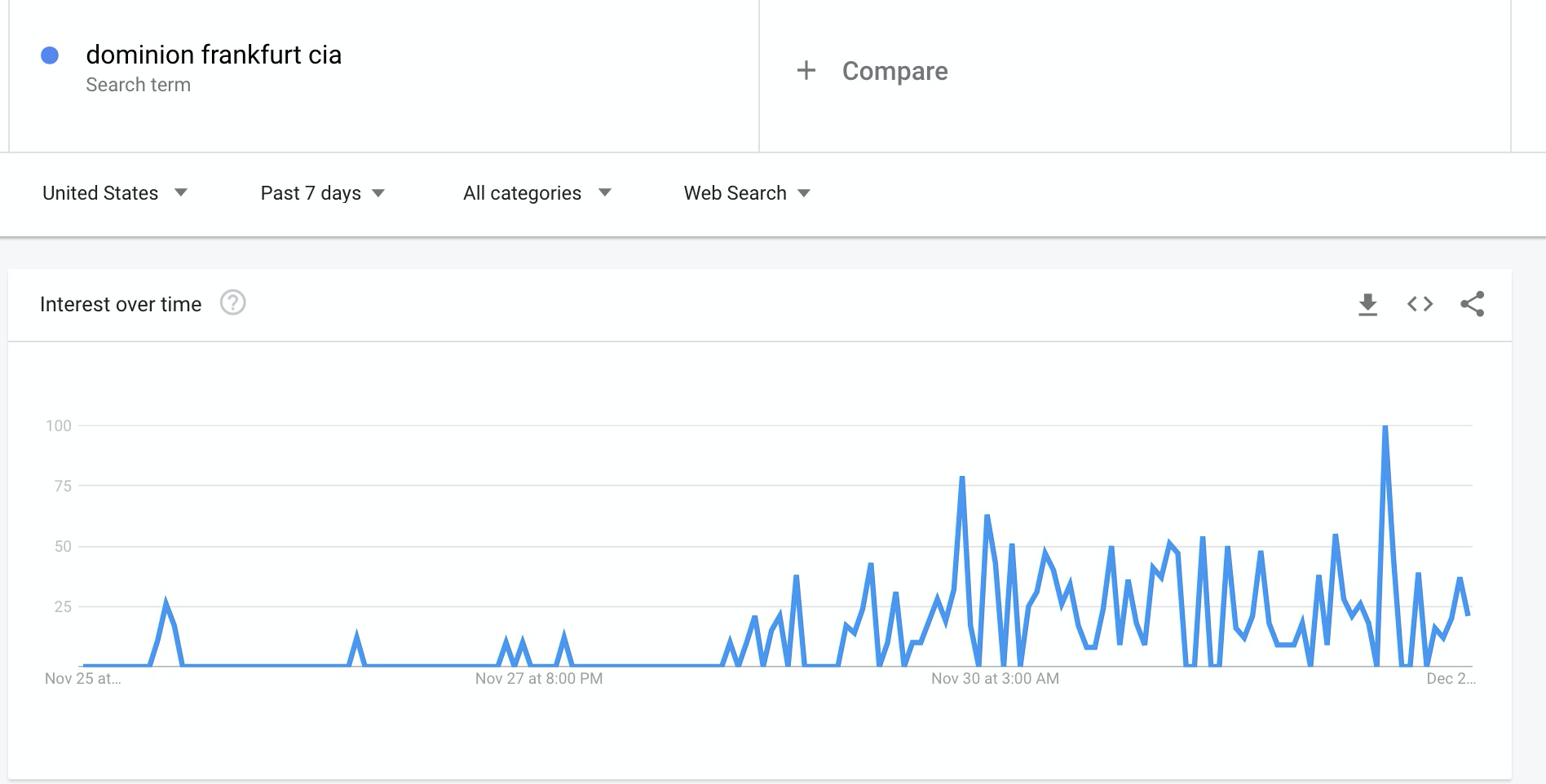 However, the elements of the story — the CIA’s involvement, the Frankfurt location, clashing branches of American military and intelligence services — were present in a nascent version of the tale shared to Reddit’s r/conspiracy at least as early as November 16 2020. It read in part (relying heavily on “reporting” from Gateway Pundit’s chief propagandist, Jim Hoft):

The U.S. Army did not conduct a raid in Germany on either Sctyl or Dominion offices or servers. They are foreign nationals and we must operate in accordance with German law. Moreover, the U.S. Army does not have law enforcement powers with respect to such entities.

So what happened? I am reliably informed that a unit under the command of USEUCOM (i.e., United States European Command) did in fact conduct an operation to take control of computer servers. But these servers belong to the CIA, not Dominion or Sctyl. The U.S. military has full authority to do this because any CIA activity in the European theater is being conducted using military cover. In other words, CIA officers would be identified to the German government (and anyone else asking) as military employees or consultants.

Such an operation would have been carried out with U.S. law enforcement present to take custody of the evidence. That means that the evidence will be under the control of the Department of Justice through US Attorneys and can be used in court or other judicial proceedings.

This is not the first time that a military unit attached to EUCOM has compelled a CIA computer facility to hand over evidence. A dear friend of mine (a retired DEA officer) told me about an incident where he entered a CIA facility in Frankfurt backed up by the US Army to get info the CIA was withholding (this took place in the 1980s).

I also have confirmed what Jim Hoft reported the other night–the CIA’s Gina Haspel was not informed in advance of this operation. Based on this fact, I think it is correct that action was taken in Germany on territory under U.S. control and that a CIA facility was targeted.

In that post, u/tripgoodmate linked to an article about the deaths of five American soldiers on November 12 2002, during a “routine peacekeeping mission in Egypt’s Sinai Peninsula.” On r/conspiracy, the rumor appeared again on December 2 2020; taken chronologically, the posts served as something of an object lesson in conspiracy algebra:

On November 28 2020, a piece authored by Natural News anti-science activist “Health Ranger” Mike Adams was published to both DC Clothesline and Truth11.com, here and here respectively. Citing absolutely nothing, Adams addressed the story as if it were accurate and contained information understood to be true among readers, in true disinformation purveyor form:

At this very minute, a covert war is raging across the globe, pitting Trump’s DoD and DIA (Defense Intelligence Agency) against black hat deep state factions running the CIA.

The good news is: Trump is winning.

As you know by now, the DoD launched a raid on a CIA-run server farm in Frankfurt, Germany, to secure servers that contain proof of CIA interference with the 2020 election (i.e. backdoor manipulations of election results via Dominion voting machines). But new information is now surfacing that indicates there was a firefight at the server farm facility, involving US Army Special Forces units, engaging with CIA-trained paramilitary units that were flown in from Afghanistan in an emergency effort to defend the facility.

One CIA officer was killed during the firefight, and he is now being reported across the mainstream media as being “killed in Somalia.” Five US Army soldiers were also killed, and they are being explained away as dying in a “helicopter crash” in Egypt.

Despite the deaths, the servers were successfully acquired by the DoD, and those servers were turned over to President Trump’s private intelligence group, which is now once again led by Gen. Michael Flynn, recently pardoned and now allowed to process top secret information, since his security clearance has been restored.

Adams claimed that the “Frankfurt raid” was “how Trump gets to 300+ electoral votes,” and added:

And so the circle is complete: DoD forces deploy cyber warfare weapons (“Kraken”) as well as kinetic troops (Special Forces, under the US Army) to acquire physical servers, all the information derived from these operations is extracted by DIA forensic analysts, it is then handed over to various expert witnesses who are prepared to testify under oath, resulting in the courts nullifying the fraudulent vote manipulations in the swing states.

In review, Mike Adams is known as the Health Ranger according to Rationalwiki. However, they point out dozens of cases where his claims are false. Besides promoting pseudoscience, Natural News is an extreme right-wing biased source that frequently promotes Donald Trump propaganda such as these [links]: President Trump has a constitutional MANDATE to use the military to protect our southern border – Richard Sacks. This article is sourced to Natural News and Brighteon News, which we have never heard of … In general, politically, all stories favor the right and promote pseudoscience such as chemtrails, the Sandy Hook shooting being a false flag … Lastly, this source denies the consensus on climate change without evidence …

A factual search reveals that Natural News has failed too many fact checks to list here.

In addition to an extensive entry about Natural News, RationalWiki maintains a list of sites owned by Adams. RationalWiki noted the massive network of domains served as “an elaborate and weirdly complex online network [built] over the past three decades … basically echo chambers of NaturalNews.”

McInerney was also referenced in a December 1 2020 MilitaryTimes.com article about the rapidly metastasizing, weaponized conspiracy theory, which bore the headline: “This retired three-star falsely claims US soldiers died attacking a CIA facility in Germany tied to election fraud.” The article began by summing up the conspiracy and McInerney’s role in spreading it, and noted that Army Special Operations Command and the Army had already debunked the claims:

It is a scenario that makes the antics of animated spy Archer seem plausible by comparison, spun by the former assistant vice chief of staff of the U.S. Air Force.

In his unfounded version of events, U.S. special operations forces died in an attack on a CIA computer facility in Germany that was hiding information about a massive, covert effort to flip votes from President Donald Trump to his opponent, Joe Biden.

But even though big Army and U.S. Army Special Operations Command have told Military Times that there was no such attack, or loss of life, retired Air Force Lt. Gen. Thomas McInerney is sticking by his claims. They became so widely distributed on social media that numerous accounts on Twitter falsely claimed that five soldiers killed in a Sinai helicopter crash were really killed in the firefight with the CIA.

McInerney, in an email to Military Times, did not offer more information regarding the sources of what he told a conspiracy-laden website over the Thanksgiving holiday. Nor did he respond to the Army statements about their falsehood.

He did, however, double down on his claims.

In a section titled “His latest tale,” the outlet again stated McInerney “offered no evidence to support his claim,” describing its circular reasoning and cyclical spread:

The new claim is that Army Special Forces soldiers were killed in Frankfurt, Germany, in a firefight with the CIA guarding a secret CIA server farm that allegedly held evidence of Dominion’s so-called election theft. This updated version of a weeks-old theory originally amplified by U.S. Rep. Louie Gohmert, R-Texas, came from an interview with McInerney, who offered no evidence to support his claim.

When Military Times asked McInerney to provide evidence to support his claims, he forwarded a lengthy conspiracy newsletter that, among other things, described Rudy Giuliani’s recent conduct as “shocking and professional” and discussed whether Trump should declare martial law to overturn the election results.

Subsequently, the  quoted McInerney’s above-referenced interview with an individual named Brannon Howse. In an excerpt, McInerney stated outright he was unable to “verify” his claims about “U.S. Special Forces troops seizing the server farm in Germany”:

Well, I’ve heard it didn’t go down without incident, and I haven’t been able to verify it … I want to be careful in that. It’s just coming out, but I understand — my initial report is — that there were U.S. soldiers killed in that operation. Now, that was a CIA operation, and so that’s the very worrisome thing.

A November 30 2020 fact check by LeadStories.com included similar comment from a military spokesperson:

Lead Stories reached out to Army Public Affairs in Washington, D.C., via email, for comment on McInerney’s claim. We received a call back from a spokesperson, who spoke on the condition of being identified as such. The spokesperson said:

These allegations are false.

LeadStories.com also referenced a fact check on their site dated November 14 2020, about versions of the story circulating at the time. Gohmert is often tagged as an original source for the initial rumors, which again, never had citations or any source other than “someone said”:

There is no sourcing for this information and no independent confirmation that the claim is real. In fact, Gohmert acknowledged in his interview that “I don’t know the truth.”

On December 2 2020, the conspiracy continued spreading on social media, typically without any sources in a word-of-mouth fashion. The claim spiked in waves as people discovered the rumors again and again, leading to its recurring appearance:

Since mid-November 2020, a completely baseless and repeatedly debunked claim has spread from extreme far-right fringes to the national conversation that a purported raid on a “CIA server farm” of Dominion equipment in Frankfurt, Germany resulted in the deaths of five American soldiers. In the weeks since Gohmert first amplified it, absolutely no information emerged to suggest even a single detail of the story was true. Nevertheless, it remained a key component in the swath of broader election conspiracies spread by those unable to cope with the decisive loss of Donald Trump in the presidential elections, evolving into an article of faith by December 2 2020.