Stillbirths doubled in Mississippi, and they are likelier to occur in unvaccinated patients.

On September 16 2021, an Imgur user shared the following screenshot, showing a headline’s claim that stillbirths had doubled in Mississippi since the start of the COVID-19 pandemic: 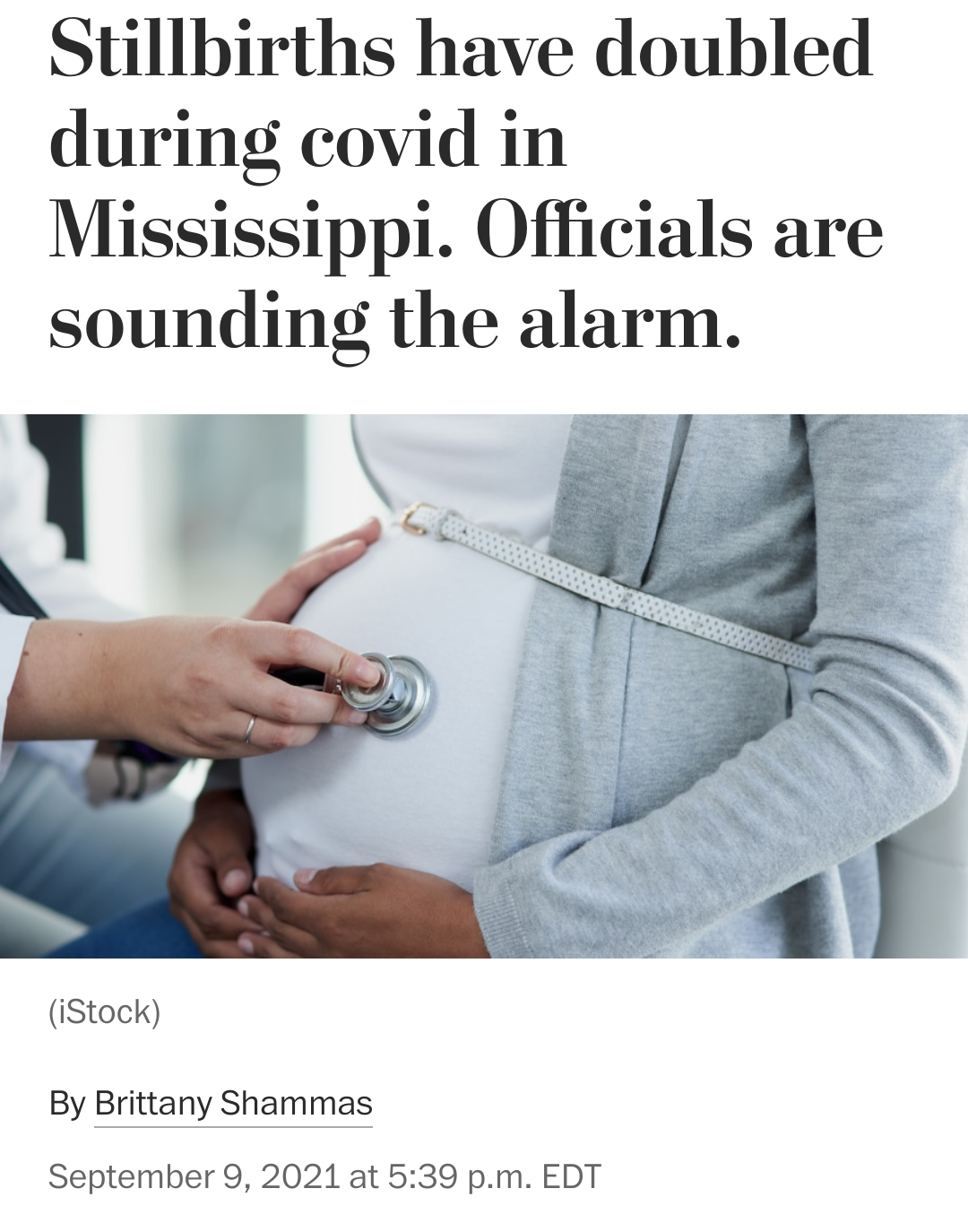 A source for the headline was not visible in the screenshot, which was dated September 9 2021:

Stillbirths have doubled during covid in Mississippi. Officials are sounding the alarm.

However, the post’s submitter linked to the source of the article, the Washington Post. The link was paywalled, but an archived copy began by reporting a double-digit figure of excess stillbirths in Mississippi:

Mississippi has recorded 72 fetal deaths in unvaccinated pregnant women infected with the coronavirus, state health officials announced [on September 8 2021], sounding the alarm on the virus’s danger in pregnancy.

Speaking during a news conference, Mississippi State Health Officer Thomas Dobbs said those deaths had occurred since the start of the pandemic. The number, which includes only deaths that occurred past 20 weeks of gestation, “is twice the background rate of what would be expected,” he said.

“That’s quite a number of tragedies that, sadly, would be preventable right now,” Dobbs said, referring to the availability of vaccines.

He said the state is also investigating the deaths of eight pregnant women who were infected with the virus. Those deaths occurred over approximately the past four weeks [in August and September 2021], during the delta variant-fueled surge, he said … In Mississippi, the overall vaccination rate has remained stubbornly low. With just under 40 percent fully vaccinated and 48 percent partially vaccinated, its vaccination rate is second-to-last in the nation.

Thomas Dobbs also said that Mississippi recorded nearly 900 deaths due to the coronavirus in August 2021, and that “none” of the victims were vaccinated; the press conference was published to the Mississippi Department of Health’s website. Dobbs referenced a “background rate,” described in epidemiological contexts as follows:

Most simply stated, the background rate of any adverse event (e.g., thrombosis, heart attack, seizure, death) is the incidence rate of the event one would observe in a given population in the absence of receipt of the vaccine being tested or any other intervention. This background rate can be assessed in the general population, in a subpopulation such as pregnant women or children, or in populations with pre-specified co-morbidities. The background rate is used to calculate the number of expected cases of an event in a given population and time period in the absence of vaccine or other intervention that can be compared with the number observed following vaccination. Preferably such data are reasonably contemporaneous given that event incidence can change over time even without a vaccine being introduced.

Other outlets covered the Mississippi press conference on September 9 2021. On September 13 2021, a US News and World Report article addressed COVID-19-related stillbirths more broadly:

While the number of stillbirths is still very low nationally, doctors in the Deep South have noticed increases in stillbirths, NBC News reported.

One of those states is Alabama. But the numbers are too low overall to draw definitive conclusions on whether the COVID cases led to a rise in stillbirths, said Dr. Akila Subramaniam, an associate professor at the University of Alabama Birmingham’s Division of Maternal-Fetal Medicine.

“Everything that we’re seeing with stillbirths is truly anecdotal. We don’t have the numbers to confirm what we perceive that we’re seeing,” Subramaniam told NBC News … Subramaniam said the usual stillbirth rate is typically 2% at her facility, which treats high-risk pregnancies, but the COVID-associated rate has ranged from 3% to 6% during the pandemic.

The national rate is 1%. The U.S. Centers for Disease Control and Prevention reports the loss of 266 pregnancies to stillbirth since the pandemic began.

Although the article observed that the numbers were “too low overall to draw definitive conclusions” on whether the pandemic has influenced the uptick in stillbirths in Mississippi (and Alabama), medical journals addressed the risk as early as July 2020.

A research letter was published in JAMA on July 10 2020, “Change in the Incidence of Stillbirth and Preterm Delivery During the COVID-19 Pandemic,” concerning the observations of its authors over a longer period and larger pool of patients in London:

We [the authors] compared pregnancy outcomes at St George’s University Hospital, London, in 2 epochs: from October 1, 2019, to January 31, 2020 (preceding the first reported UK cases of COVID-19), and from February 1, 2020, to June 14, 2020. Outcomes included stillbirth, preterm birth, cesarean delivery, and neonatal unit admission. We investigated all stillbirths and repeated the analysis after excluding late terminations for fetal abnormalities, as the definition of stillbirth in the UK includes late termination at 24 weeks’ gestation or beyond.

In a “discussion” section, its authors explained that testing protocols at the time the data was collected may have confounded such a conclusion:

Although none of the stillbirths in the pandemic period were among women with COVID-19, surveillance studies in pregnant women reported that as much as 90% of SARS-CoV-2–positive cases were asymptomatic. Moreover, until recently, UK national policy limited testing to symptomatic individuals requiring hospitalization. Alternatively, the increase in stillbirths may have resulted from indirect effects such as reluctance to go to the hospital when needed (eg, with reduced fetal movements), fear of contracting infection, or not wanting to add to the National Health Service burden. Changes in obstetric services may have played a role secondary to staff shortages or reduced antenatal visits, ultrasound scans, and/or screening.

A September 15 2020 Nature article, “Stillbirth rate rises dramatically during pandemic,” referenced a contemporaneous Lancet study, reporting that “disrupted” healthcare services may have been a factor:

A slew of studies from around the world has reported a disturbing trend: since the coronavirus pandemic started, there has been a significant rise in the proportion of pregnancies ending in stillbirths, in which babies die in the womb. Researchers say that in some countries, pregnant women have received less care than they need because of lockdown restrictions and disruptions to health care. As a result, complications that can lead to stillbirths were probably missed, they say.

By November 2020, a letter published by the Lancet indicated that the “direct impact of COVID-19 on mothers and babies [was] becoming clearer,” alluding to longer-term data emerging. An April 2021 article, “Doctors Investigate Several Stillbirths Among Moms with COVID-19,” described “direct impact” instances reported in Ireland:

Clinicians in Ireland are warning about a spate of stillbirths in the first few months of 2021 that they have linked to SARS-CoV-2 infections. There were six women in the country who suffered stillbirths and one who experienced a miscarriage, each a few weeks after she had COVID-19. Five of the cases so far involved the variant B.1.1.7, which has now come to dominate cases in Ireland, the UK, much of Europe, and the US.

In all instances, the placenta was extensively damaged. “The placentas look completely burnt out, just incredibly necrotic and damaged,” says Keelin O’Donoghue, an obstetrician at Cork University Maternal Hospital in Ireland who is part of team preparing a manuscript on the cases. “They all have suffered acute injury, which is why you have an acute effect in terms of fetal compromise or death.”

A May 2021 BBC article reported that a “large UK study suggests having coronavirus around the time of birth may increase the chance of stillbirths and premature births — although the overall risks remain low,” in turn citing a May 2021 study in the American Journal of Obstetrics and Gynecology. Just before and in the “Conclusions” section, researchers explained limitations and outcomes:

Our results should be strictly interpreted as being related to the result of a test for SARS-CoV-2 at the time of birth, rather than to any infection which occurred during pregnancy. This is an important feature given that some of the observations in women who have a positive test result for SARS-CoV-2, especially the increases in the risk of stillbirth and preterm birth in women with a positive test, may be partly explained by variations in the rate of SARS-CoV-2 infection according to gestational age. This is different from other studies which seek to understand effects on women who are infected with SARS-CoV-2 at any point during their pregnancy and from studies which assess population risks of fetal death measuring both direct and indirect effects.

Our results demonstrate that women who have laboratory-confirmed infection with SARS-CoV-2 at the time of birth have higher rates of fetal death and preterm birth, preeclampsia and emergency cesarean delivery, and prolonged maternal and neonatal admission after birth than those without SARS-CoV-2 infection. There were no additional adverse neonatal outcomes, other than those related to preterm delivery. These findings should guide the counseling of pregnant women about risks of SARS-CoV-2 infection during pregnancy and indicate that pregnant women should be prioritized for vaccination.

A September 16 2021 Imgur post featured a headline, “Stillbirths have doubled during covid in Mississippi. Officials are sounding the alarm,” from a September 9 2021 Washington Post article. The headline accurately reported that Mississippi’s public health officials warned of an uptick in stillbirths, citing “72 fetal deaths in unvaccinated pregnant women infected with the coronavirus.” A global increase in stillbirths since the beginning of the COVID-19 pandemic has been noted across medical journals, beginning as early as July 2020. Researchers initially speculated that a lack of access to obstetric care was a factor, but noted that early studies involved populations where testing was scarce. As the pandemic progressed, sources like the American Journal of Obstetrics and Gynecology noted that rates of stillbirth were higher in patients who have “laboratory-confirmed infection with SARS-CoV-2 at the time of birth.”