A photograph shows that Panama City's airport is underwater, thanks to Hurricane Michael.

Amid images of survivors and the aftermath, the usual hurricane hoaxes began to appear, like this one: 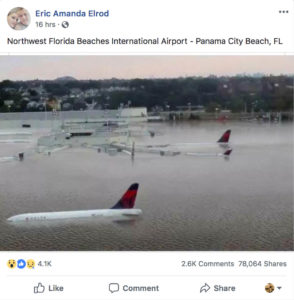 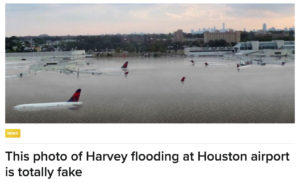 In reality, the image isn’t even a photograph but a digital mockup from artist Nickolay Lamm, part of a series showing the potential effects of climate change; the article also contains images showing what the same airport (which is LaGuardia, for the record) might look like at sea level rises at five, 12, and 25 feet. (The hoax used the image showing 25 feet.)

There are many scenes showing Michael’s devastating power and its aftermath. This one, however, is not one of them. And while we don’t ever claim to be in the business of predicting the future, we can say with confidence that when the inevitable “shark swimming through the streets after the hurricane” image appears, it won’t be real either.