The president of a telephone company predicted that phones "will be carried about by an individual, perhaps as we carry a watch today" — in 1953.

A telecommunications president’s remarkably far-flung vision for his industry not only gained attention online in 2019, it is actually legitimate.

It is likely that Mark R. Sullivan’s remarks at an unidentified April 1953 event were first captured by a wire service. But it is true that one of the newspapers that reprinted the story, “There’ll Be No Escape in Future From Telephones,” was the Tacoma News-Tribune. 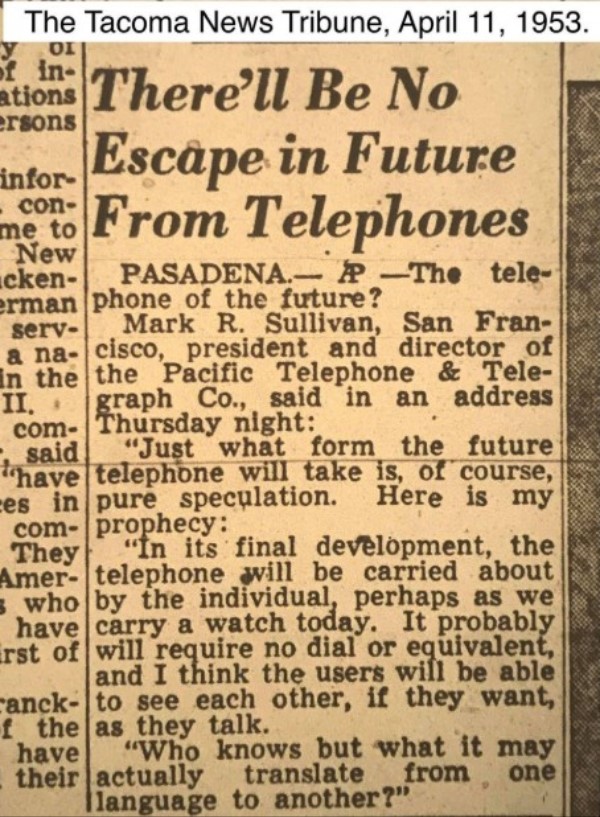 Sullivan, who was the president of the Pacific Telephone and Telegraph Company, said at the time:

Just what form the future telephone will take is, of course, pure speculation. Here is my prophecy: In its final development, the telephone will be carried about by the individual, perhaps as we carry a watch today. It probably will require no dial or equivalent, and I think the users will be able to see each other, if they want, as they talk. Who knows but what it may actually translate from one language to another?

The News-Tribune confirmed that it printed the story on April 11, 1953, but the newspaper could not identify the reporter covering Sullivan’s remarks prior to publication.

Sullivan would serve at the helm of Pacific Telephone until 1945. He later led another firm, Potomac Telephone Companies. As for Pacific Telephone, it would go on to be known as Pacific Bell (aka PacBell) and was part of a set of companies acquired by AT&T.