Americans could receive smaller than anticipated tax refunds from the Internal Revenue Service (IRS) in 2023. 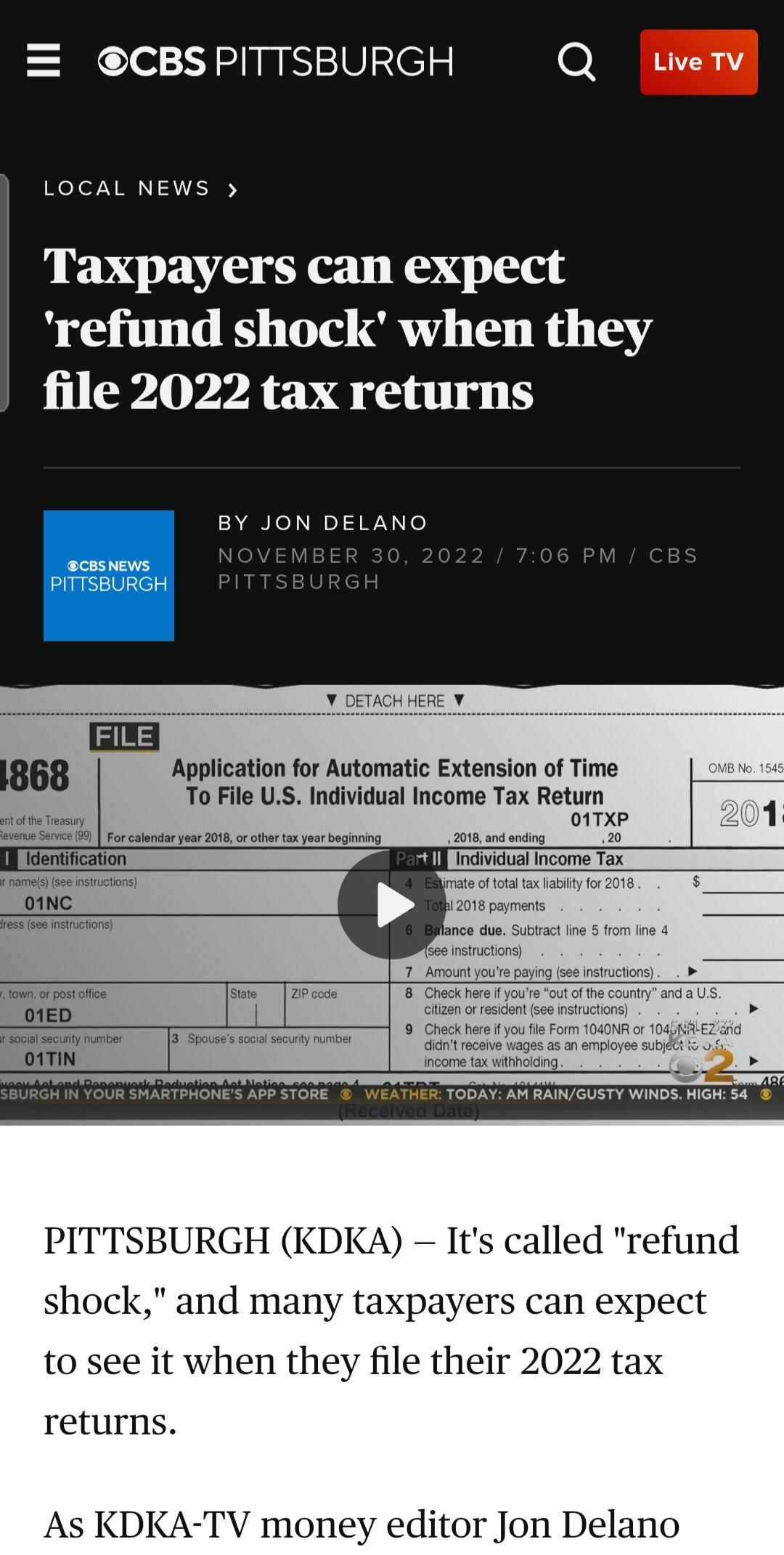 That claim alone was provocative, as many Americans rely on annual tax refunds to remain solvent. Financial services company Bankrate conducted a yearly survey on the role played by tax refunds in the finances of working-class Americans, and in 2022 reported:

Moreover, inflation remained a key concern at the end of 2022. In July, the United States Bureau of Labor Statistics (BLS) quantified the effect of rising prices throughout 2022:

Prices for new vehicles increased 11.4 percent over the year, prices for used cars and trucks were up 7.1 percent, while prices for motor vehicle parts and equipment increased 14.9 percent.

The Imgur post not only included a source (CBS Pittsburgh, KDKA-TV) and date in the screenshot, but also featured a link to the November 30 2022 article (“Taxpayers can expect ‘refund shock’ when they file 2022 tax returns”), which reported:

It’s called “refund shock,” and many taxpayers can expect to see it when they file their 2022 tax returns.

As KDKA-TV money editor Jon Delano explains, there may not be a lot most of us can do about it.

Thanks to pandemic relief measures passed by Congress in the last year of the Trump administration [2020], and especially during the first year [2021] of the Biden administration, many Americans got very big tax refunds earlier this year. But don’t count on a repeat.

“We call it refund shock or refund whiplash, and really it has to do with a lot of the tax benefits put in place last year as part of the way to combat the pandemic – a lot bigger credits, a lot more credits, stimulus money – a lot of that went away at the start of this year,” says Mark Steber, chief tax information officer for Jackson Hewitt.

The average refund for 2021 was well over $3,000, more than 15 percent above the average pre-pandemic refund in 2019. But Steber says to expect a big drop in your tax refund for 2022 because three credits, in particular, were not renewed.

According to KDKA-TV and a representative for tax preparer Jackson Hewitt, filings in 2021 and 2022 (for tax years 2020 and 2019) often included temporary pandemic-related credits and benefits. KDKA-TV reported that “three credits, in particular” had not been renewed for the 2022 tax year (reflected in 2023 filings).

In July 2022, Jackson Hewitt issued a press release with a title similar to the KDKA-TV article: “Jackson Hewitt Warns Taxpayers They Might Experience Refund Shock for 2022 Tax Returns.” It contained four bullet points to help avoid “refund shock,” citing factors that could cause smaller refunds.

Primarily, the causes included the absence of stimulus payments, changes to reporting by apps like Venmo and Zelle, and the reversion of three previously expanded credits (the Child Tax Credit, the Earned Income Tax Credit, and the Dependent Care Credit) to pre-pandemic “levels”:

A November 22 2022 press release from the Internal Revenue Service (IRS) explicitly warned filers that their refunds could be adversely affected for the 2022 tax year. In a section covering what was “new in Tax Year 2022,” the agency mentioned lowered reporting requirements affecting services like Venmo, reduced credits, and urged filers not to expect refunds by “a certain date”:

Taxpayers should report the income they earned, including from part-time work, side jobs or the sale of goods. The American Rescue Plan Act of 2021 lowered the reporting threshold for third-party networks that process payments for those doing business. Prior to 2022, Form 1099-K was issued for third-party payment network transactions only if the total number of transactions exceeded 200 for the year and the aggregate amount of these transactions exceeded $20,000. Now a single transaction exceeding $600 can trigger a 1099-K. The lower information reporting threshold and the summary of income on Form 1099-K enables taxpayers to more easily track the amounts received. Remember, money received through third-party payment applications from friends and relatives as personal gifts or reimbursements for personal expenses is not taxable. Those who receive a 1099-K reflecting income they didn’t earn should call the issuer. The IRS cannot correct it.

Credit amounts also change each year like the Child Tax Credit (CTC), Earned Income Tax Credit (EITC) and Dependent Care Credit. Taxpayers can use the Interactive Tax Assistant on IRS.gov to determine their eligibility for tax credits. Some taxpayers may qualify this year for the expanded eligibility for the Premium Tax Credit, while others may qualify for a Clean Vehicle Credit through the Inflation Reduction Act of 2022.

Refunds may be smaller in 2023. Taxpayers will not receive an additional stimulus payment with a 2023 tax refund because there were no Economic Impact Payments for 2022. In addition, taxpayers who don’t itemize and take the standard deduction, won’t be able to deduct their charitable contributions.

The IRS cautions taxpayers not to rely on receiving a 2022 federal tax refund by a certain date, especially when making major purchases or paying bills. Some returns may require additional review and may take longer. For example, the IRS and its partners in the tax industry, continue to strengthen security reviews to protect against identity theft. Additionally, refunds for people claiming the Earned Income Tax Credit (EITC) or the Additional Child Tax Credit (ACTC) can’t be issued before mid-February. The law requires the IRS to hold the entire refund – not just the portion associated with EITC or ACTC. This law helps ensure taxpayers receive the refund they’re due by giving the IRS time to detect and prevent fraud.

Other news organizations reported on the existence of a few tax filing changes that might work more favorably for filers. CNet indicated that tax brackets were adjusted due to inflation, and that the standard deduction would be higher:

… For 2022, income tax brackets were also raised to account for inflation. Your income bracket refers to how much tax you owe based on your adjusted gross income, which is the money you make before taxes are taken out, excluding itemized exemptions and tax deductions.

While the changes were slight, if you were at the bottom of a higher tax bracket in 2021, you may have bumped down to a lower rate for your 2022 tax return.

TurboTax, another tax preparer, updated their guidance on the standard deduction on December 1 2022, and explained the purpose of it:

Figures for 2022 in the second paragraph were slightly higher than in 2021:

A popular December 1 2022 Imgur post suggested Americans could experience “tax refund shock” in 2023. Tax preparer Jackson Hewitt used the term in the linked article as well as in a July 2022 press release marketing their tax preparation services. The IRS issued a similar advisory in a November 22 2022 press release, stating that tax refunds “may be smaller in 2023,” citing the absence of an “additional stimulus payment with a 2023 tax refund because there were no Economic Impact Payments for 2022.” Three expanded tax credits — the Child Tax Credit and Earned Income Tax Credit among them — were set to revert. However, “slight” changes to tax brackets would reduce tax liability for filers “at the bottom” of a higher tax bracket.