In April 2022, Tennessee passed a bill requiring drunk drivers to pay child support if they kill parent of a minor.

On April 22 2022, posts on Imgur and Reddit alluded to a purported new bill in Tennessee requiring “drunk drivers” to pay child support if their actions led to the death of a parent of a minor child or children: 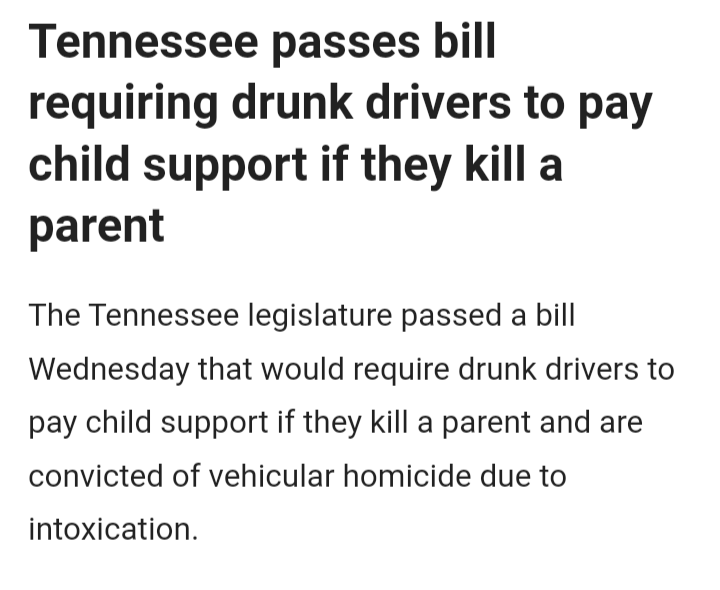 A separate post to Imgur included the top comment in that r/politics thread. That comment referenced a separate controversy at around the same time, regarding a Tennessee marriage bill that lacked an age limit:

Loophole: you can get out of it by marrying the kid.

Another commenter questioned how enforcement of the bill might affect a child or children whose parent was killed by a drunk driver:

It’s an interesting piece of legislation. I am all for testing it out in one state. The only problem I see is it ties a minor to the person that killed their parents until they’re an adult. You know most of these people will become deadbeats and won’t pay. This gives the devastated minor something else negative to think about for years.

A Tennessee bill requiring a drunk driver to pay child support if they kill a parent during a crash passed unanimously in the state’s Senate.

House Bill 1834 had already been approved unanimously in the House. The measure would force anyone convicted of vehicular homicide due to intoxication or aggravated vehicular homicide to pay restitution if the victim is the parent of a minor child.

According to the bill, the court would determine an amount that is “reasonable and necessary” after considering several factors …

WREG added that the bill was also known as “Bentley’s law,” linking to a November 2021 article about a Tennessee woman’s efforts:

A grandmother from Missouri is working with her state representative to create a law that would seek financial restitution from DUI offenders whose actions resulted in the death of a parent or guardian.

Cecilia Williams introduced the idea of Bentley’s law after her son, Cordell Williams, 30, his fiance, Lacey Newton, 25, and their 4-month-old son, Cordell II, were all killed in a DUI crash in April [2021] … Williams said the accident left her two grandsons, Bentley, 5, and Mason, 3, orphaned and she believes the man who caused the accident should be held financially responsible.

On April 22 2022, the New York Times reported on the bill, noting that it hadn’t been signed into law on that date:

The Tennessee General Assembly on [April 20 2022] became what is believed to be the first state legislature to pass a bill that would require drunken drivers to pay child support if they kill the parent of a minor.

The bill, named “Ethan, Haile, and Bentley’s Law” after children who lost their parents to intoxicated drivers, passed unanimously in the Senate on [April 20 2022] and had passed unanimously in the House in February [2022]. The measure will be sent to Gov. Bill Lee, who will review the legislation before deciding whether to sign it into law, a spokesman for the governor said.

If signed into law, the measure would require those convicted of such crimes involving the death of a parent to pay child support for the victim’s minor children. It would last until each child reaches 18 years of age and has graduated from high school or until the class of which the child is a member when turning 18 has graduated.

Under this bill, if a defendant is convicted of vehicular homicide due to intoxication or aggravated vehicular homicide and the victim of the offense was the parent of a minor child, then the sentencing court must order the defendant to pay restitution in the form of child maintenance to each of the victim’s children until each child reaches 18 years of age and has graduated from high school, or the class of which the child is a member when the child reached 18 years of age has graduated.

This bill requires the court to determine an amount that is reasonable and necessary for the maintenance of the victim’s child after considering all relevant factors, including, but not limited to:

(1) The financial needs and resources of the child;

(2) The financial resources and needs of the surviving parent or guardian of the child, including the state if the child is in the custody of the department of children’s services; and

(3) The standard of living to which the child is accustomed.

ON FEBRUARY 28, 2022, THE HOUSE ADOPTED AMENDMENT #1 AND PASSED HOUSE BILL 1834, AS AMENDED … AMENDMENT #2 incorporates the provisions of House Amendment #1 and changes the short title of this bill from “Bentley’s Law” to “Ethan’s, Hailey’s, and Bentley’s Law”.

On April 21 and 22 2022, popular posts on Imgur and Reddit discussed a bill passed in Tennessee that apparently required defendants convicted of vehicular homicide to pay restitution in the form of child support (“maintenance.”) The bill was real and accurately described, and it passed Tennessee’s House and Senate as of April 22 2022. It had not yet been signed into law by Gov. Bill Lee, who was reviewing the legislation after it passed in both chambers.