Sen. Ted Cruz tweeted and deleted a fake screenshot of an article by The Atlantic.

On October 14 2022, a screenshot of a tweet attributed to Sen. Ted Cruz (R-Texas) with a headline from The Atlantic circulated on Twitter: 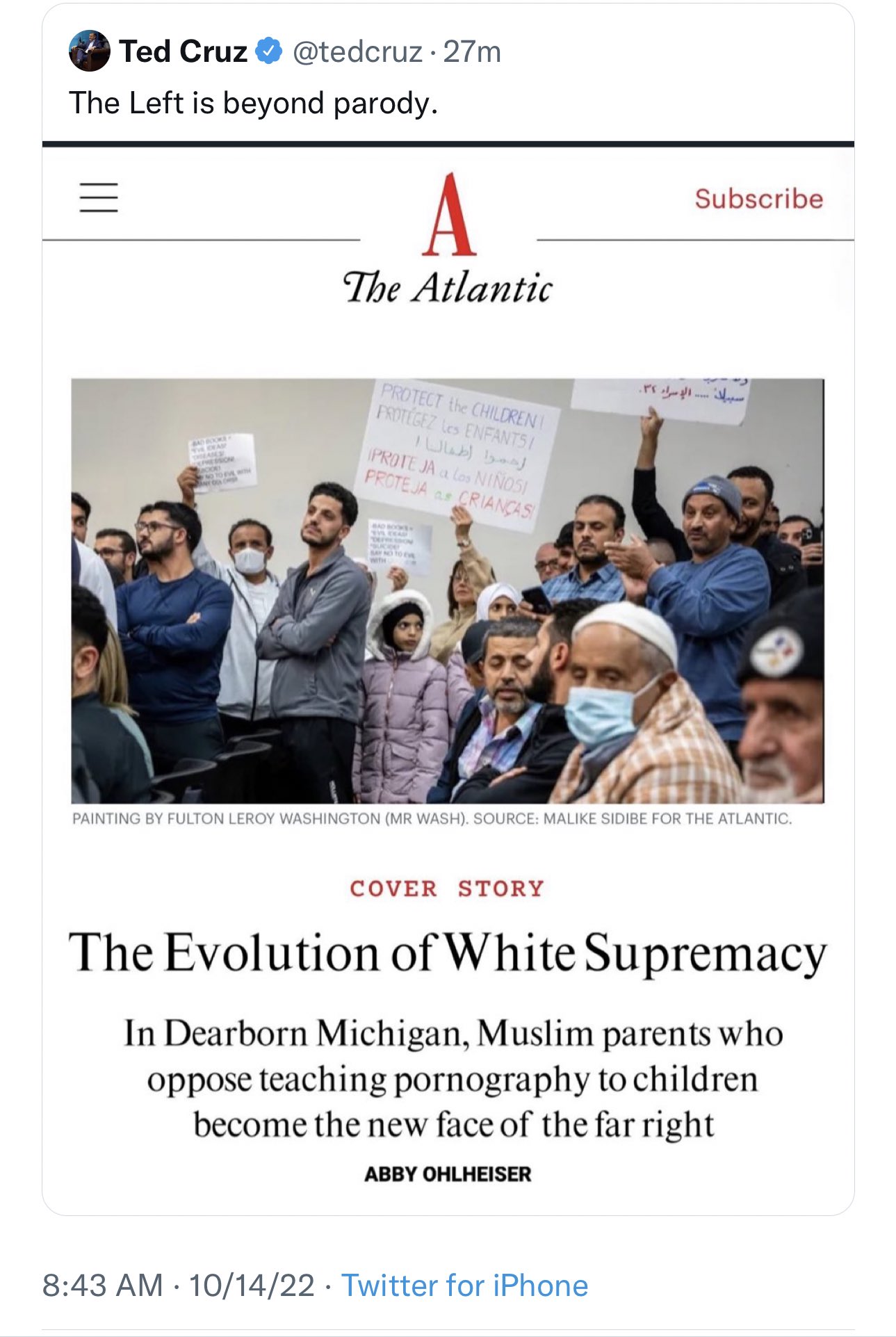 The screenshot, a mockup of a headline from The Atlantic, featured an image of people gathered at an event. Text of the tweet, supposed headline, subheading, byline, and Twitter date and timestamp read:

The Left is beyond parody.

The Evolution of White Supremacy

In Dearborn Michigan, Muslim parents who oppose teaching pornography to children become the new face of the far right

In a preceding tweet, producer Vaughn Sterling said that Cruz had attempted to conceal the falsehood by sharing a screenshot instead of a link to what he implied was a real published article by The Atlantic:

There’s a reason Mr. Cruz didn’t share a link to the story: there isn’t one.

He is using his platform as a U.S. senator to publish a fake headline to smear his political opponents.

Which is truly beyond parody.

A search for “The Atlantic The Evolution of White Supremacy” did not return any matching content, and the screenshot did not include a date for the purported article. The magazine published the similarly titled “The Language of White Supremacy” in October 2017, but the featured image was from 1925.

A reverse image search indicated that the photograph in the screenshot was from October 2022. It returned several articles for the week ending October 14 2022, all of which concerned a school board controversy in Dearborn, Michigan, as well as an iteration of the screenshot shared to Twitter on October 13 2022:

Cruz had at least two known accounts on Twitter; the one in the screenshot was @TedCruz. A search of his timeline did not lead to the tweet, but a search of ProPublica’s Politwoops archive confirmed that Cruz did tweet, then delete the image after leaving it up for about half an hour:

On October 13 2022, the author whose name was in the hoax screenshot promulgated by Cruz tweeted about receiving direct messages (DMs) on Twitter due to the circulating screenshot:

Four hours after Cruz deleted the tweet, he confirmed he shared and deleted it. Cruz did not apologize, falsely claiming that “it could have easily been real”:

Didn’t know it was fake. You guys are so insane, it could easily have been real.

But it wasn’t. And so I deleted the tweet as soon as I found out. https://t.co/5vD8OYJgDr

On October 14 2022, Texas Republican Sen. Ted Cruz tweeted a screenshot of a fake article (“The Evolution of White Supremacy”) attributed to The Atlantic. The screenshot was circulating the previous day, and the real author named in the byline tweeted about direct message harassment due to the phony screenshot. Cruz quietly deleted the tweet, later attributing fault for the error to his belief that “it could easily have been real.”