One such rumor centered around Dr. Ford not actually existing. Instead, according to this particular theory, she is a piece of performance art created and sustained for many years by none other than actress and comedian Amy Schumer at the behest of her relative Sen. Chuck Schumer (D-New York): 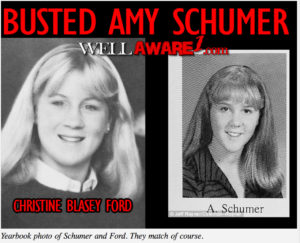 Despite the lack of any evidence that Amy Schumer has been donning prosthetics to play the part of Dr. Ford for many years, and a mountain of replicable evidence that they are indeed two separate people, the theory gained traction in some of the more credulous corners of the internet, pushed by the usual array of bots, trolls, and useful idiots (mostly at the #Pizzagate and #QAnon levels of social media): 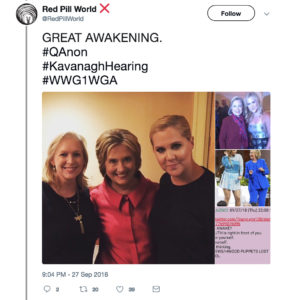 It is true, as is claimed above, that comedian and actor Amy Schumer is a semi-distant relative of Sen. Chuck Schumer (the New York Democrat is her father’s cousin.) This is hardly secret knowledge, as the Washington Post reported in 2014:

Schumer the comedian (that would be Amy) is the creator and star of “Inside Amy Schumer,” an Emmy-nominated sketch comedy series. Her dad, Gordon Schumer, is the senator’s cousin.

“I highly doubt he has ever seen my act,” said Amy Schumer in a 2011 interview with LA Weekly about her first cousin once removed (that would be Chuck). But that might have changed. After the White House Correspondents Association dinner in May, the senator told New York Daily News that he planned to check out Ms. Schumer’s act, which can reportedly get a little raunchy.

Sunday’s run-in was both a Kodak moment and a clear reminder of the senator’s Hollywood swag.

What is not true is that there is any link at all between Amy Schumer and Christine Blasey Ford, much less that one is playing the other in prosthetic makeup. Even the disinformation-type meme “proving” the resemblance between the two women (above) shows only the slightest of incidental resemblances.

Add to that the fact that Amy Schumer would have only been a year old in 1982 (when Brett Kavanaugh allegedly drunkenly groped and harassed a 15-year-old Christine Ford, and that there are photographs documenting her existence every step of the way, including a 1999 high school yearbook photograph showing her as “Class Clown,” and this particular conspiracy fever dream falls apart before it even gets out of the gate.