In the summer of 2020, nebulous rumors circulated about August 27 on TikTok — and much of the chatter involved social media users‘ befuddlement, particularly with respect to the date and the platform:

what is it with August 27 tiktok help

why are tiktok people going wild over august 27

A common variation of the rumor indicated “something” would happen on August 27 2020 — but users didn’t seem to know precisely what the date’s significance might be (plus it’s an easy projection, as “something” happens every single day):

As the posts above demonstrate, many people on social media were aware that August 27 2020 was purportedly significant, mainly because of posts on TikTok.

A majority of commenters didn’t seem to understand why the date was significant, and discussion of the rumor occurred on other platforms, too. As early as July 8 2020, Reddit users were discussing the rumors:

On the same date, a user posted to r/OutOfTheLoop to ask about why everyone was suddenly discussing August 27 2020 on TikTok:

What’s up with the August 27 meme on Tik Tok? from OutOfTheLoop

Over on r/ARG, a subreddit devoted to augmented reality games, multiple posts speculated that the rumors were a possible ARG. One post’s submitter claimed the “August 27 TikTok” rumor stared on July 6 2020:

I’m not sure if this is an ARG but definitely seems like one. Related to the august 27th 2020 tiktok trend that started July 6th but this channel started uploading a year ago from ARG

Predictably, readers bereft of details began speculating that the specific date was related to other mysterious events:

Similarly, a user of r/conspiracy surmised the TikTok trend was linked to an earlier conspiracy:

Please Read And Spread from conspiracy

Posts on witchcraft-related subreddits also queried fellow redditors about the significance of August 27 2020:

A sub-rumor was that on August 27 2020, “manifesting” wishes or desires would be easier, and ascribed that particular meaning to the TikTok trend:

There are theories the day has strong links to astrology and people will have good luck today, and others think it’s the day all your inner manifestations will come true.

It’s not clear where that element of the rumor started, but it became one of the most prominent claims about the date.

Although posts about the date were eventually rife on TikTok, the original “August 27” TikTok post indeed was shared on July 6 2020. User @stfusamantha initiated the trend with the following video:

In the short clip, a close-up shot of a girl or young woman is visible. As music played, the video progressively displayed the following text: 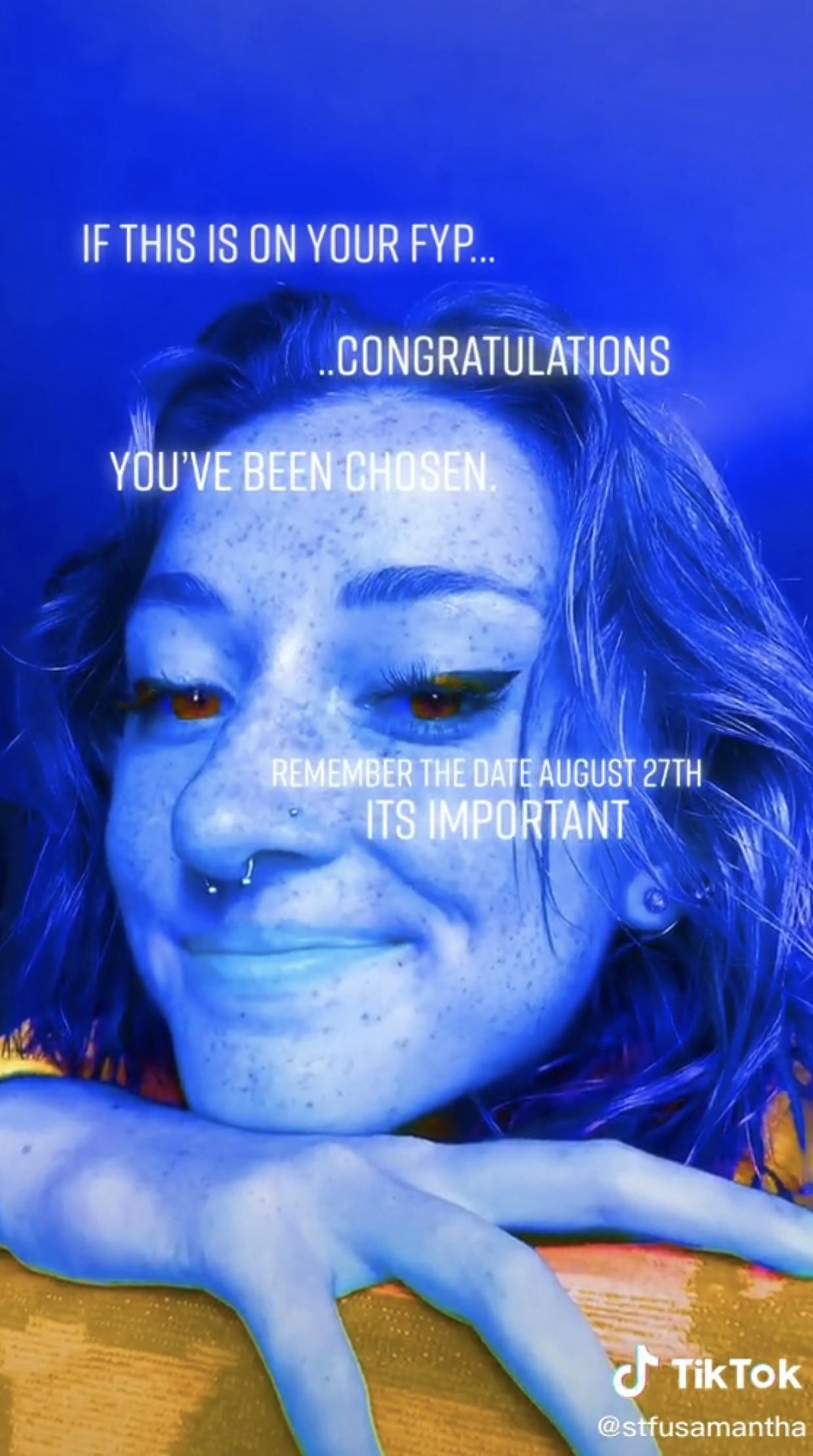 In the context of TikTok, a “FYP” is “‘For You’ page,” content selected specifically for a TikTok user. Text over the video read:

IF THIS IS ON YOUR FYP… ..CONGRATULATIONS

From there, other users posted similar content, and the trend took off rapidly. On July 7 2020, a Twitter user attempted to discern the meaning of the August 27 trend, and shared screenshots of subsequent comments from @stfusamantha:

This was the second of two screenshots in that tweet; it was unclear if @stfusamantha made the comments on July 6 or 7 2020: 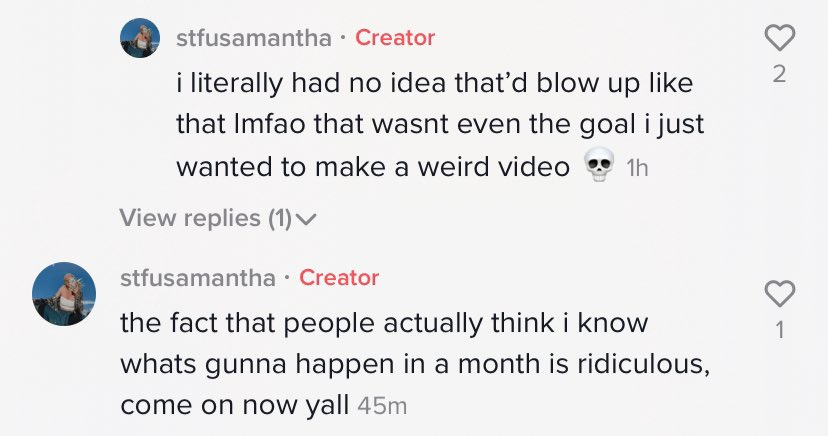 the fact that people actually think i know whats gunna happen in a month is ridiculous, come on now yall

In her own words, @stfusamantha “wanted to make a weird video,” and the “fact that people actually think” she knew what would happen on August 27 2020 or in August 2020 was “ridiculous.” In short, a TikTok user felt like making an ominous video, not expecting it to become a viral sensation across platforms.

As of August 27 2020, TikTok and other social media users continued broadly speculating on the meaning of the date — perhaps unaware the meme’s originator later commented that she “just wanted to make a weird video.” A popular iteration of the rumor held that the date was somehow significant for users looking to “manifest” something, but for the most part, people posting about the rumor were only aware the date was purportedly significant — and did not know why. In its totality, the entire incident shows how easy it is for disinformation to latch onto existing statements or events and twist them in order to create mass consternation or panic.