The morning after a May 24 2022 mass shooter killed multiple children and teachers in Uvalde, Texas, The Onion edited their notable and cyclical “No Way to Prevent This …” article and front page; at the same time, an account spotting changes to the non-satirical New York Times spotted an unsettling, real-life news counterpart.

The Onion originally published the piece, “‘No Way To Prevent This,’ Says Only Nation Where This Regularly Happens,” after a 2014 shooting in Isla Vista, California. Updates to the page were frequent enough to warrant a Wikipedia entry devoted to its variations.

Each article is about 200 words long, detailing the location of the shooting and the number of victims but otherwise remaining essentially the same. A fictitious resident — usually of a state in which the shooting did not take place — is quoted as saying that the shooting was “a terrible tragedy”, but “there’s nothing anyone can do to stop them”. The article ends by pointing out that the United States is the “only economically advanced nation in the world where roughly two mass shootings have occurred every month for the past eight years” and that Americans view themselves and the situation as “helpless” … The article was first published on May 27, 2014, following the Isla Vista shooting. Since then, The Onion has republished the same article an additional 20 times as of May 2022, nearly verbatim, with only minor changes to reflect the specifics of each shooting.

In 2017, managing editor for The Onion Marnie Shure said, “By re-running the same commentary it strengthens the original commentary tenfold each time. … In the wake of these really terrible things, we have this comment that really holds up.”

As indicated later in the entry, The Onion replaced all of its front-page content with iterations of the same article on May 25 2022. The image was striking: 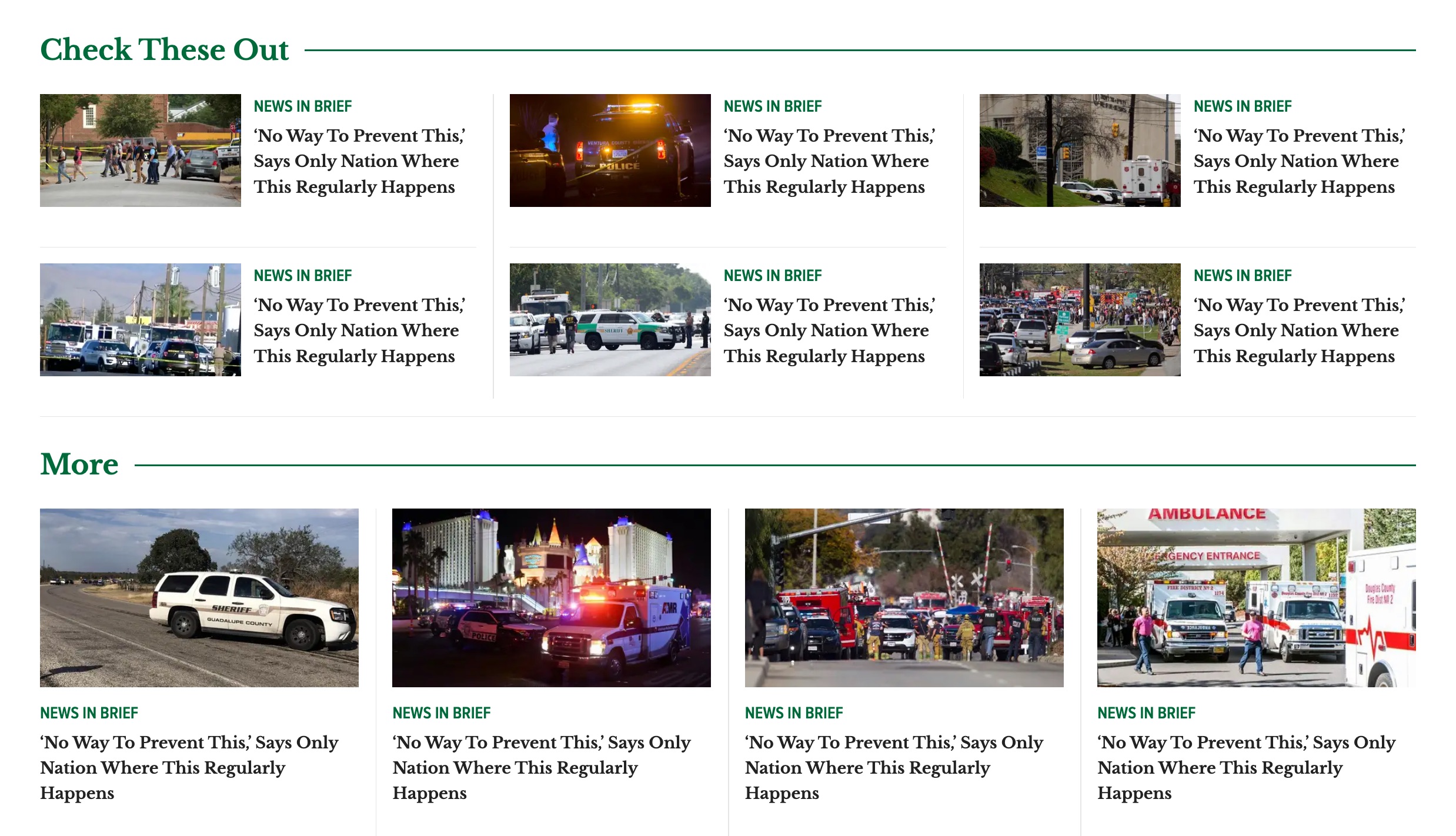 As “The Onion” trended on Twitter, a separate and depressingly non-satirical observation about the New York Times moved from Twitter to Imgur:

That commentary referenced a tweet by @nyt_diff, an account that tracks edits to live New York Times stories, published on May 24 2022. It showed a change in copy on reporting about the deadliest mass shooting as of May 2022:

The attack at a supermarket an elementary school in Buffalo in May, Uvalde, Texas, in which 10 people 14 children and a teacher were killed, was the country’s deadliest shooting this year.

A Google search for some of the unchanged text (“was the country’s deadliest shooting this year”) returned two New York Times tweets — the latter with a death toll revised upwards:

The massacre in Uvalde, in which 14 children and a teacher were killed, was the deadliest mass shooting in the U.S. this year. It happened just 10 days after 10 people were killed in a Buffalo supermarket. https://t.co/JFDWZQHB7f

The massacre in Uvalde, in which at least 19 children and two adults were killed, was the deadliest mass shooting in the U.S. this year. It happened just 10 days after 10 people were killed in a Buffalo supermarket. https://t.co/P2fbtzaWyW

A gunman killed 10 people in a Buffalo, New York, supermarket on Saturday, making the massacre the deadliest mass shooting in the U.S. so far this year. There were three other shootings this weekend.

Both tweets and the previous Facebook post led to a New York Times article, itself not unlike The Onion‘s 2014 “No Way to Prevent This …” piece:

The massacre in which 19 children and two teachers were killed at an elementary school in Uvalde, Texas, on May 24 [2022] was the deadliest mass shooting in the United States so far this year [2022]. It happened just 10 days after 10 people were shot and killed in a supermarket in Buffalo.

The Gun Violence Archive, a nonprofit organization, counted at least 213 such shootings, defined as one in which four or more people were killed or injured, through mid-May [2022]. Of those shootings, 10 involved four or more fatalities.

For clarity, the Times did not recycle its phrasing, per se. Rather, the linked reporting was a “partial list” of mass shootings in the United States in 2022, updated on a rolling basis.

On May 25 2022, The Onion replaced its entire front page with various variations on its recurring “‘No Way To Prevent This,’ Says Only Nation Where This Regularly Happens” article. At the same time, a Twitter account devoted to edits in the New York Times highlighted an unsettling edit, updating a location and the total number of people killed in its ongoing list of mass shootings in the United States. In the real-life news article, the majority of the text remained intact — eerily mirroring The Onion‘s now-famous satirical piece.