"Feels like a good time to remind everyone the United States has the highest maternal death rate of any developed country."

On June 27 2022, an Imgur user shared a post claiming the United States had the highest rate of maternal mortality among developed nations, as part of am ongoing national discussion about the recent Supreme Court decision to overturn Roe v. Wade: Feels like a good time to remind everyone the United States has the highest maternal death rate of any developed country.

Text of the meme mentioned a “developed country,” or an industrialized country with advanced infrastructure. A “developing country” has lower average income, a lower gross domestic product or GDP, and fewer upwardly mobile pathways.

The Centers for Disease Control (CDC)’s resources on maternal mortality defined “a pregnancy-related death as the death of a woman while pregnant or within 1 year of the end of pregnancy from any cause related to or aggravated by the pregnancy.”

The World Health Organization (WHO) explains maternal mortality as:

The annual number of female deaths from any cause related to or aggravated by pregnancy or its management (excluding accidental or incidental causes) during pregnancy and childbirth or within 42 days of termination of pregnancy, irrespective of the duration and site of the pregnancy.

Maternal mortality rates fluctuated between nations and across systems. However, the statistic counted the number of people who died during pregnancy, childbirth, or in the postpartum period.

Does the United States Have the Highest Maternal Death Rate in the Developed World?

A December 2020 article in the American Journal of Managed Care, “U.S. Ranks Worst in Maternal Care, Mortality Compared With 10 Other Developed Nations,” noted that maternal mortality rates are calculated as the number of deaths per 100,000 live births. It began:

Among 11 developed countries, the United States has the highest maternal mortality rate, a relative undersupply of maternity care providers, and is the only country not to guarantee access to provider home visits or paid parental leave in the postpartum period, a recent report from The Commonwealth Fund concluded. Compared with any other wealthy nation, the United States also spends the highest percentage of its gross domestic product on health care.

Maternal deaths have been increasing in the United States since 2000, and although 700 pregnancy-related deaths occur each year, two-thirds of these deaths are considered to be preventable.

In an issue brief, researchers assessed maternal mortality, maternal care workforce composition, and access to postpartum care in 10 high-income nations and compared findings with the United States. Data from Australia, Canada, France, Germany, the Netherlands, New Zealand, Norway, Sweden, Switzerland, and the United Kingdom were gleaned from 2020 health statistics compiled by the Organization for Economic Co-operation and Development. US data were taken from the CDC’s Pregnancy Mortality Surveillance System … Overall pregnancy-related mortality in the United States occurs at an average rate of 17.2 deaths per 100,000 live births. Leading causes of death include cardiovascular conditions, hemorrhage, and infection. However, in the Netherlands, Norway, and New Zealand, that rate drops to 3 or fewer women per 100,000.

However, a CDC.gov page (“Maternal Mortality Rates in the United States, 2020,” last reviewed in February 2022) indicated that completed statistics for 2020 demonstrated a significant uptick in maternal deaths for 2020:

A May 2022 FiveThirtyEight.com assessment of maternal mortality linked the CDC data above:

Broadly, claims that the United States ranked the highest in maternal mortality among developed countries appeared to link back to a November 2020 report by the Commonwealth Fund: “Maternal Mortality and Maternity Care in the United States Compared to 10 Other Developed Countries.” It found:

Women in the U.S. are the most likely to die from complications related to pregnancy or childbirth.

In 2018, there were 17 maternal deaths for every 100,000 live births in the U.S. — a ratio more than double that of most other high-income countries (Exhibit 1). In contrast, the maternal mortality ratio was three per 100,000 or fewer in in the Netherlands, Norway, and New Zealand.

The report examined contributing factors, including lack of parental leave and more sparse postpartum care, and included a chart — published prior to the CDC’s upward revision of “about 700” women to the 861 deaths in 2020: 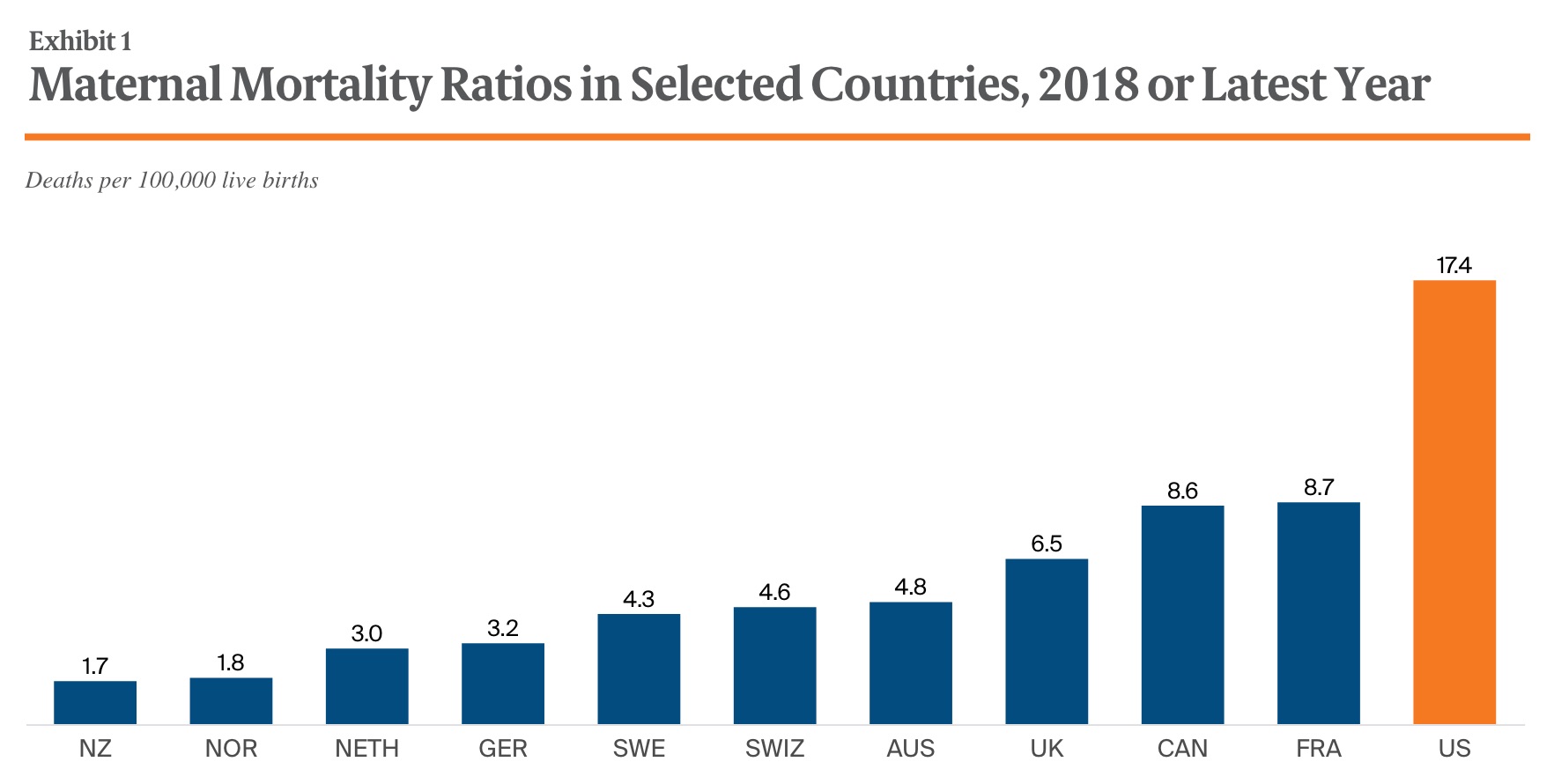