"Those cups are made to be thrown in the laundry after you fill them up. It cleans them."

On January 20 2020 Facebook user Amber Miller shared a virally popular “laundry hack,” asserting that detergent cups are designed to be added to every wash, because “it cleans them”:

Tik Tok life/laundry hack taught to me by Nicolette.

“Hey mom, you do know those cups are made to be thrown in the laundry after you fill them up. It cleans them.”

Go ahead. Tell me you knew this. 😳

In the middle of my laundry energy burst from my energy supplement (www.myxyngular.com/aviars) I was schooled.

Miller’s post contained two subtle promotions — one for her daughter’s TikTok channel, and another for what appeared to be a multi-level marketing “energy supplement.” By sharing the post in its original format versus in screenshot form, users were unwittingly also driving traffic to both.

Use of highly-sharable viral Facebook posts seemed to be an uptrending MLM tactic, as indicated by a similar widely-shared post from a multi-level marketing recruit asking others to share her recording of a sound only people over a certain age could hear. Promotional motives are a relevant factor, because it means that the user may possibly be more concerned with the promise of likes and shares, and possibly less concerned with veracity.

The “detergent cups in laundry” hack also appeared suspiciously soon after a massively popular claim that laundry detergent or Downy could be poured into a toilet tank to make the bathroom smell nice, which is not great advice. Another feature we have seen in questionably accurate but virally shared Facebook posts was the claim in the original post that millions of laundry-doers the world over lived in ignorance of a fundamental feature of liquid laundry detergent, namely that the caps were supposed to go in with the laundry and not back on the bottle. Although it was “supposed to be” used in the fashion described, virtually no one seemed to be doing that.

A “doing it wrong” element drove viral interest in similar claims that “everyone” was incorrectly using Glade air fresheners or other solid household fragrances. That particular claim conflicted with usage instructions provided by the manufacturer.

We examined three separate brands of liquid laundry detergent to verify the claim “those cups are made to be thrown in the laundry after you fill them up,” i.e., that the manufacturer specifically fabricated liquid laundry detergent cups to go in each wash cycle. A bottle of Tide + Downy not only did not indicate any such thing, it included no information suggesting that the cups be washed in such a fashion.

A second bottle of liquid detergent with a measuring cup cap from Trader Joe’s (“Liquid Laundry Detergent”) similarly bore no such instruction, whether in an indication of manufacturing intent or even as a helpful hint. Nor did a third liquid detergent, Arm & Hammer brand.

Although it didn’t seem to be a massively risky cleaning habit to acquire, it also seemed possibly easier to simply rinse the cup in a sink if it became caked with detergent residue. That way, the cup would not be melted by high temperatures in the washer, accidentally thrown in the dryer, or generally used in a manner not intended by the manufacturer.

The claim seemed to possibly originate several years prior in blog posts. An undated post from 2012 or earlier contained claims about a washable laundry cup — but one which had purportedly been created to be washed. The blogger also indicated the cup ought only to accompany loads of wash every fourth or fifth time:

If you’re like me and this is brand new information, let me give you a word of caution: don’t throw the cup in with the wash every single time. Only throw it in every 3-4 loads.

Front loading washers spin at extremely high speeds. After washing my detergent cup repeatedly, it did warp and look like it wouldn’t make it to the end of the laundry bottle. So be cautious in just haphazardly throwing it in the wash every single load.

WHICH DETERGENT HAS THESE WASHABLE CUPS?
While doing a monthly shopping trip at BJ’s this past weekend, I looked at all of the detergents in the laundry aisle. All of the major brands – Tide, Arm & Hammer, All, Gain, Era – seem to have a cup that can be washed in the machine.

Of note is that an included image showed a cap clearly marked “TOSS IN WASH.” In that instance, those detergent measuring cups appeared to have been designed to be included in washing machine drums. Lifehacker lifted the same tip from a random Reddit user in 2018, but did not claim that the cups were designed to go in the washing machine; so did ApartmentTherapy.

As for the 2012-or-earlier “TOSS IN WASH” detergent measuring cups, if they were ever in widespread use, they seemed to be discontinued. A vestigial post to Tide’s Facebook wall in October 2018 was shared by a miffed customer reporting that “TOSS IN WASH” didn’t always mean it was okay to throw detergent caps in with laundry:

Please do not put “Toss in wash” on the measuring cup if it’s not durable enough to withstand a wash cycle. I now have a cracked useless measuring cup.

How am I supposed to measure my detergent now??

That user attached a photograph of a sturdy-looking clear cap marked “TOSS IN WASH,” which was cracked directly down the center and clearly unsuitable for further use.

A commenter on Miller’s page asked Gain (another popular brand) about the advice. Gain denied that the cups were so designed: 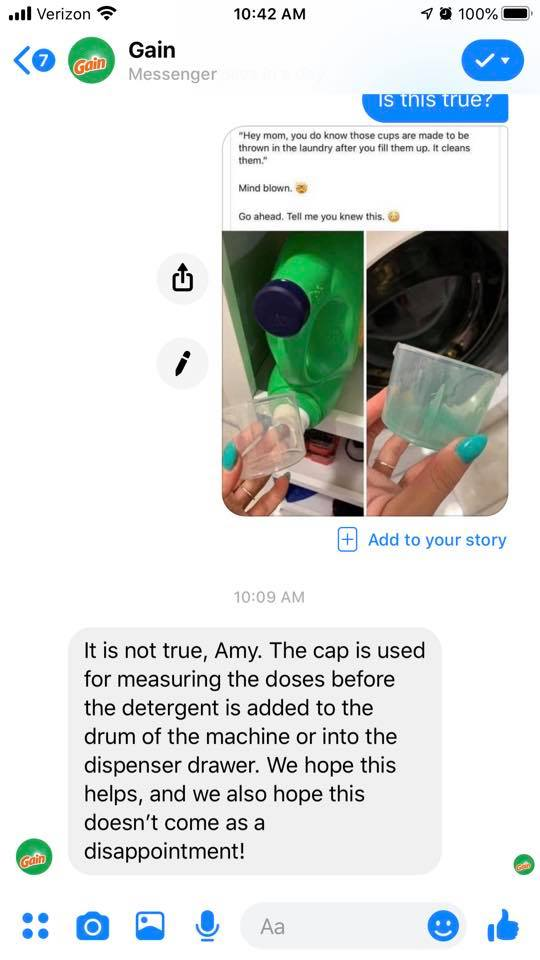 Like many viral Facebook household hack posts, the claim that detergent caps were “made to be thrown in the laundry after you fill them up” was not only misleading and possibly more trouble than it was worth, the original sharer may have selected a likely-to-go-viral “tip” to drive traffic to their personal sales or marketing endeavors. It’s likely you can get away with throwing a cap in with your wash (and that people probably do so regularly, if only by accident), but aside from a small number of “toss in wash” caps, detergent measuring cups are neither designed to be washed with laundry nor even recommended to be washed in laundry. A “life hack” that we can verify for the same outcome involves a sacrifice of ten seconds, warm water, and literally any sink in your household or laundromat.

Update, 3:02 PM: Readers have reported possessing bottles of detergent with “toss in wash” cup instructions as of January 2020. Although Tide affirmed and Gain appeared to affirm the advice was not official, brands such as Cheer purportedly contained the directive. Although it seemed some brands did not discourage washing cups alongside laundry, detergent measuring cups were not specifically “made to be thrown in the laundry after you fill them up.”