A man named Alan Youll died in a cupboard during a game of hide-and-seek; his father Brian suffered the same fate in 1995.

On February 11 2020, an Imgur post featured what looked like a page from the UK-based tabloid the Mirror about a hide-and-seek champion named Alan Youll’s purported tragic death during a championship bout: 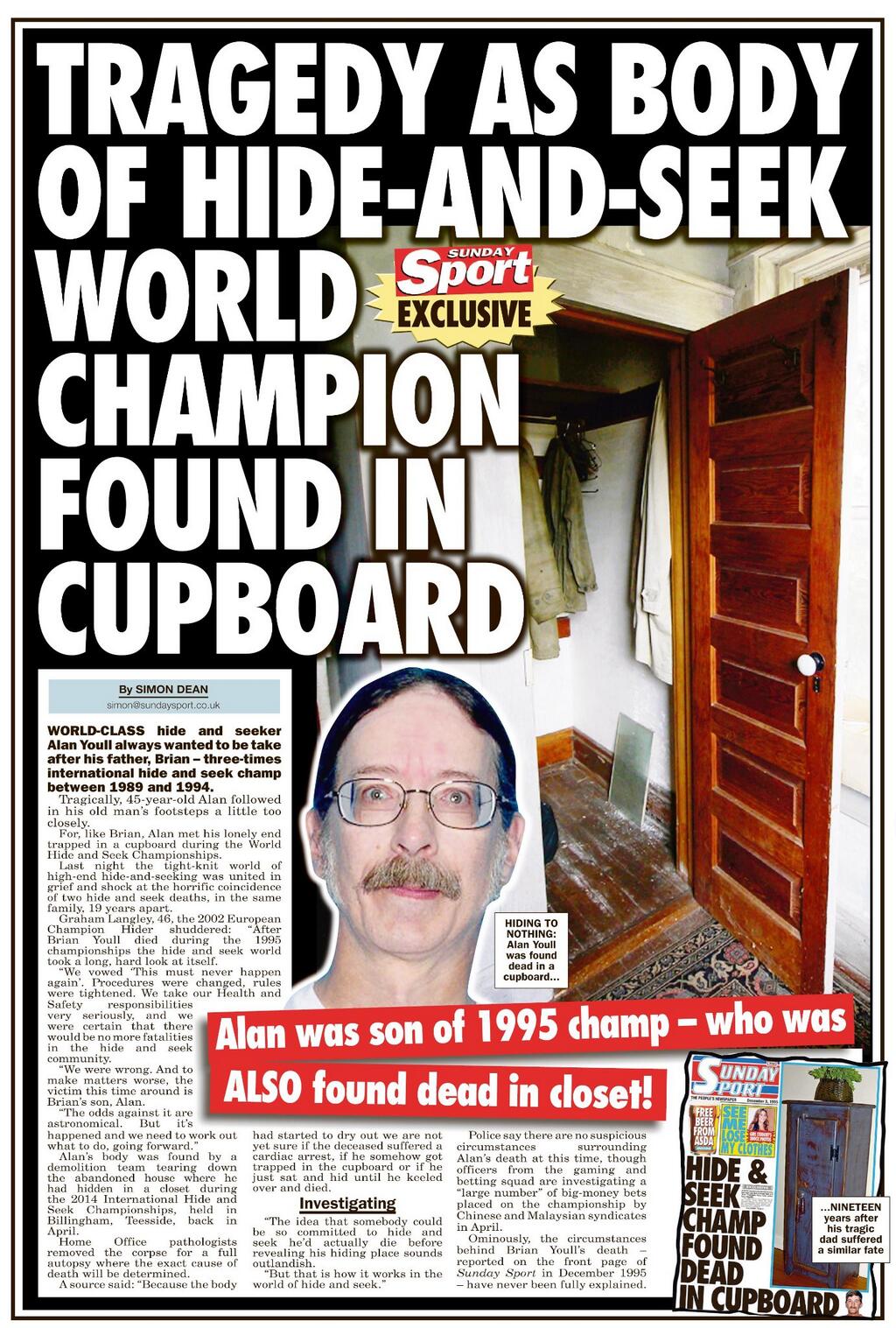 A headline took up half of the page, reading “Tragedy as Body of Hide-and-Seek World Champion Found in Cupboard.” The paper looked like other UK tabloids, and a sole transcribed version of the article was available through Press Reader.

WORLD- CLASS hide and seeker Alan Youll always wanted to be take after his father, Brian – three- times international hide and seek champ between 1989 and 1994.

For, like Brian, Alan met his lonely end trapped in a cupboard during the World Hide and Seek Championships.

Last night the tight- knit world of high- end hide- and- seeking was united in grief and shock at the horrific coincidence of two hide and seek deaths, in the same family, 19 years apart.

Graham Langley, 46, the 2002 European Champion Hider shuddered: “After Brian Youll died during the 1995 championships the hide and seek world took a long, hard look at itself.

“We vowed ‘This must never happen again’. Procedures were changed, rules were tightened. We take our Health and Safety responsibilities very seriously, and we were certain that there would be no more fatalities in the hide and seek community.

“We were wrong. And to make matters worse, the victim this time around is Brian’s son, Alan.

“The odds against it are astronomical. But it’s happened and we need to work out what to do, going forward.”

Alan’s body was found by a demolition team tearing down the abandoned house where he had hidden in a closet during the 2014 International Hide and Seek Championships, held in Billingham, Teesside, back in April [2014].

A nod to the nature of the article appeared immediately thereafter, when the copy addressed whether Alan Youll “A source said: “suffered a cardiac arrest,” somehow got trapped in the cupboard,” or “just sat and hid until he keeled over and died.” An unnamed source was quoted:

The idea that somebody could be so committed to hide and seek he’d actually die before revealing his hiding place sounds outlandish. But that is how it works in the world of hide and seek.

A tweet by @thesundaysport was also more humorous than somber:

Without context, some Imgur commenters questioned whether the depicted article was intended to be taken seriously. But a quick web search put that to rest. Sunday Sport had a Wikipedia page, which began:

Sunday Sport is a British tabloid newspaper, published by Sport Newspapers, which was originally established in 1986. Defenders of the publication have said the Sport was never intended to be taken seriously: it has featured such stories as a London Bus being discovered at the Antarctic, a World War II Bomber on the Moon, or a statue of Elvis Presley on Mars.

A sister publication called Daily Sport was described as being “known for ridiculous headlines to entirely fabricated stories.” And a similar satire site ran a nearly identical story about a hide-and-seek death in 2018 or 2019.

Although the “Tragedy as Body of Hide-and-Seek World Champion Found in Cupboard” headline and article about the purported death of a man named Alan Youll looked like a Mirror excerpt to Americans, it originated with a British equivalent to Weekly World News. The story was fabricated and intended to be humorous, part of a larger piece involving an earlier story about a related “hide-and-seek champion” meeting a similar fate.