On January 13 2020, United States President Donald Trump tried to attack a Democratic Party presidential candidate for “false advertising” by repeating a lie of his own.

In a tweet attacking former New York City mayor Michael Bloomberg, Trump claimed that he was “the person who saved Pre-Existing Conditions in your Healthcare, you have it now, while at the same time winning the fight to rid you of the expensive, unfair and very unpopular Individual Mandate”: 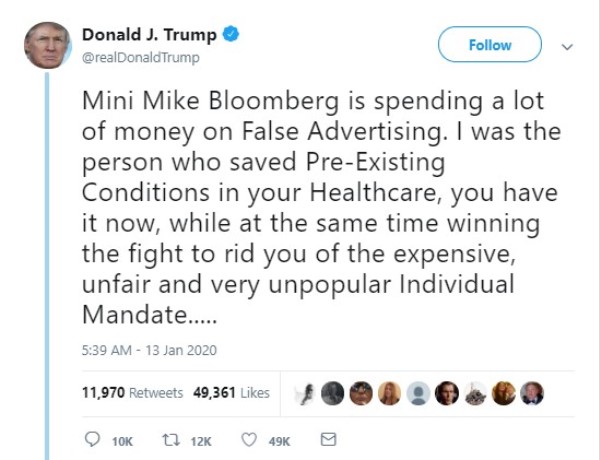 But in reality, Trump and his administration have gone to court seeking the undoing of the Affordable Care Act; the law (also popularly known as “Obamacare”) originally mandated that healthcare plans not disqualify or inflate charges against those with pre-existing conditions, and that individuals be fined if they failed to have a plan. The Tax Cuts and Jobs Act of 2017, passed by a Republican-led Congress and signed into law by Trump, effectively struck the individual mandate down by reducing the amount of that fine to zero dollars.

The effort to dismantle the law continued in July 2019, when a group of twenty Republican attorneys general filed a lawsuit saying that without the fine, the law itself was unconstitutional. The Justice Department opted not to defend the ACA in the suit, Texas v. Azar.

In December 2019, a panel of three judges from the Fifth Circuit Court of Appeals found that the mandate itself was unconstitutional but did not make a further ruling concerning the overall law. Three days before the president’s tweet attacking Bloomberg, the administration filed a brief to the Supreme Court saying that there was no “present, real-world emergency” requiring the high court to make an emergency ruling on the matter, preserving the law through the high court’s current term, which expires in June 2020 — five months before the presidential election.

The Trump administration has also sought to tear down the ACA’s regulations concerning short-term health plans; the law mandated that users could only be covered under these types of plans up to three months at a time, with no plan being renewable.

Through an executive order he issued in July 2017, Trump and his administration have also walked back the ACA’s rules concerning less-expensive short-term health plans, allowing users to employ them for up to one year with an option to renew. But several analyses have found that while they tend to cost less, those types of plans do not protect users with pre-existing conditions. According to the Los Angeles Times, a plan administered by Golden Rule Insurance provided an example of how short-term plans “lowballed” their users:

This definition would allow the insurer to delve deeply into a customer’s health retroactively for two years should he or she present UnitedHealth with a claim. This was a habit health insurers engaged in freely before the ACA banned the practice.

The plan’s prescription benefit is a skimpy $3,000, and it’s provided only through a discount card worth 20 percent to 25 percent of the cost of a prescription, leaving the customer exposed to what could be thousands of dollars in prescription expenses. It caps lifetime benefits for all services as low as $250,000.

The plan doesn’t cover pregnancy, most abortions, most organ transplants or chemotherapy associated with bone marrow transplants. It won’t cover injuries incurred on a motorcycle or while horseback riding or skiing.

In July 2019, a federal judge upheld the administration’s move making those types of plans more accessible.