United States President Donald Trump sent his Turkish counterpart a letter on official White House stationary, telling him not to be a "tough guy" and "a fool" regarding carrying out an attack against Kurdish fighters.

As criticism continued to swirl around President Donald Trump for his Middle East policy, a Fox Business Channel host produced a letter from him on to his Turkish counterpart Recep Tayyip Erdoğan of Turkey seeking “a good deal.”

A photograph of the letter was posted on Twitter by Fox’s Trish Regan on October 16 2019. According to the image, the letter was dated seven days earlier: 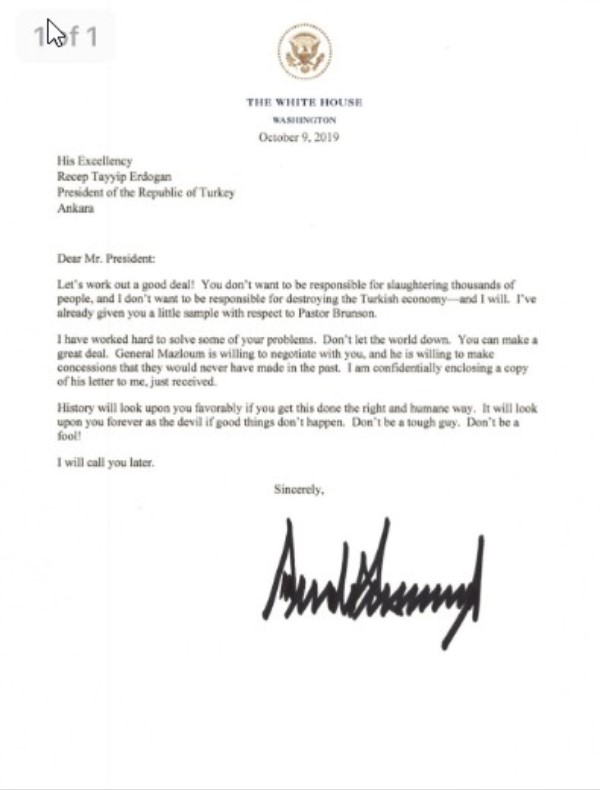 I have worked hard to solve some of your problems. Don’t let the world down. You can make a great deal. General Mazloum is willing to negotiate with you, and he is willing to make concessions that they would never have made in the past. I am confidentially enclosing a copy of his letter to me, just received.

I will call you later.

Reporters from Bloomberg News and Talking Points Memo later corroborated Regan’s reporting, saying that the White House had confirmed its existence to them. We contacted the White House seeking comment but did not hear back.

The letter, dated October 9 2019, was apparently sent two days after Trump said on Twitter that United States troops would “get out of these ridiculous Endless Wars” and limit its presence in the area covering the border between Turkey and Syria. Turkish troops subsequently attacked a Kurdish group, the Syrian Democratic Forces (SDF), which had been a key ally for the US in the fight against the Islamic State terrorist group.

Hours before Regan posted the photo of the letter, Trump dismissed the issue of abandoning the Kurdish fighters during a joint press conference with Italian President Sergio Mattarella, saying:

He also claimed that “the situation on the Turkish border with Syria to be, for the United States, strategically brilliant. Our soldiers are out of there, they’re totally safe.”