As the ginned-up “War on Christmas” has become an annual fixation among the American right wing, a parallel has emerged for critics of United States President Donald Trump, who have seized on the season to tweak him by comparing him to his presidential predecessor Barack Obama.

The juxtaposition is summarized in one graphic showing tweets from both presidents: Trump writing, “Wishing everyone a very Happy Holiday season!” in 2010 placed alongside Obama writing “Merry Christmas” three years later.

The caption underneath reads, “This is awkward.” 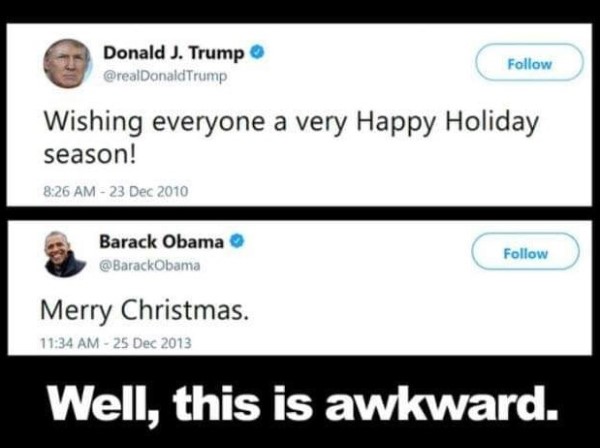 However, the graphic leaves out that Obama’s 2013 tweet includes a photograph of himself and First Lady Michelle Obama:

The comparison is “awkward” because Trump himself (who also loudly promoted the bogus “birther” smears against Obama, in which its adherents claimed that he was ineligible to be president because he was born in Kenya, an untrue and roundly debunked conspiracy theory) has invited it. While running for president, he pandered to white evangelical voters by claiming, “If I become president, we’re gonna be saying ‘Merry Christmas’ at every store.”

The key to Trump’s argument was to paint Obama as being against the Christian holiday (which tacitly encouraged another debunked rumor, which was that Obama was Muslim and therefore anti-Christian) by claiming that the latter had abandoned saying “Merry Christmas” in favor of saying “Happy Holidays,” an inclusive phrase that right-wing media has smeared as an affront to Christianity.

All of these claims have been debunked repeatedly during Trump’s presidency by several news outlets. In 2017, MSNBC host Chris Hayes provided more evidence with a segment highlighting footage of Obama saying “Merry Christmas.”

Donald Trump is claiming victory in the War on Christmas, saying he brought “Merry Christmas” back to the White House. We found plenty of evidence proving him wrong… #inners pic.twitter.com/fGBSbYybvx

A year later, the Guardian reported that Trump’s own businesses have failed to follow his stated intention that only “Merry Christmas” should be uttered:

Trump International hotel and tower, half a mile from Trump Tower, has used the term Christmas three times on Twitter in the past eight years. It has used “holidays”, in relation to the season, more than a dozen times.

Trump Tower has similarly betrayed the president’s hardline Christmas stance. “Happy holidays from Trump Tower!” the building’s Twitter feed exhorted in December 2016 — a month after Trump’s election victory should have represented the final blow in the Christmas war. It has used the phrase twice this month alone.

The Guardian also reports that his online store made reference to a “curated holiday gift guide” instead of one named after Christmas. The site remained active as of December 2019:

The store also sells what it calls a “holiday room spray”:

“Step into a charming evergreen forest each time you spritz our Holiday Room Spray,” the advertising copy states. “A delightful fragrance of pine and evergreen, this spray is perfect for daily use for an enchanting aroma during the holidays.”