A suspicious screenshot grabbed Twitter users’ attention on December 17 2020, making some think that outgoing President Donald Trump and his campaign intended to continue denying his loss in the U.S. presidential elections into the new year.

The document in the photo was made up to resemble a press release from Trump campaign manager Bill Stepien, saying that the Trump administration would celebrate its “continuation of power and Second Term” on January 20 2021 — the same day as the actual inauguration of President-Elect Joe Biden:

This celebration of our President will take place at the President’s residence at Mar-A-Lago, or the Winter White House.

We look forward to celebrating this occasion with all Americans! Regardless of the intentions of so-called President Elect Joe Biden, President Donald Trump will not be conceding the 2020 Election, nor does he plan on leaving the White House at any point prior to January 20th.

Any attempt to remove the Trump administration will require force. We will not back down from this fight. Americans deserve better. 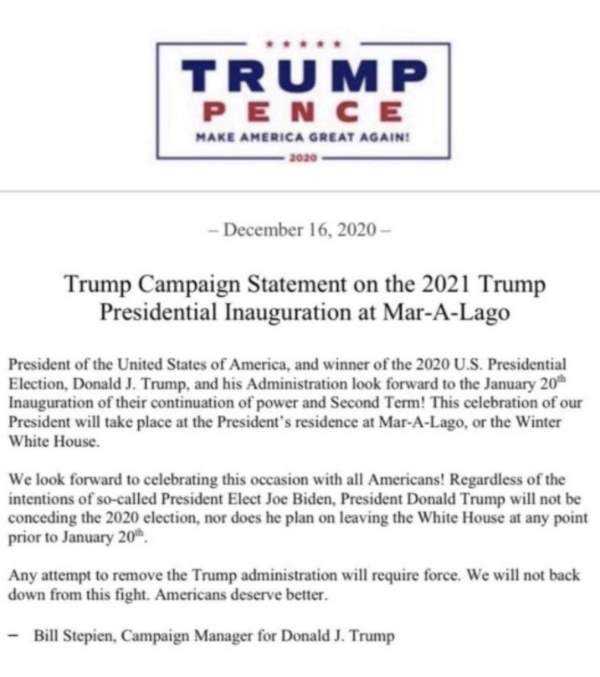 There is little reason to believe that the photo represents an actual email or statement from Trump’s campaign. For one, it does not appear on Trump’s website. Neither is there any sign of the photo on Stepien’s Twitter account, which has not been active since November 2020.

From: Official Trump Polling
Subject: Should President Trump run in 2024?
Preheader: What do you think? pic.twitter.com/1Qg0h5SNG1

The purported statement appeared online shortly after the New York Times reported on a possible conflict brewing between Trump and residents living near the Mar-a-Lago property:

Neighbors of Mar-a-Lago sent a letter to the Town of Palm Beach and the U.S. Secret Service on Tuesday complaining that Mr. Trump has violated the 1993 agreement he made with the town that allowed him to convert the property to a moneymaking club.

“Per the use agreement of 1993, Mar-a-Lago is a social club, and no one may reside on the property,” wrote Reginald Stambaugh, a lawyer representing the DeMoss family, which has a property next to Mar-a-Lago.

“To avoid an embarrassing situation for everyone and to give the president time to make other living arrangements in the area, we trust you will work with his team to remind them of the use agreement parameters,” Mr. Stambaugh wrote. “Palm Beach has many lovely estates for sale, and surely he can find one which meets his needs.”