On August 10 2022, an Imgur account shared two images — one news screenshot suggesting that former United States President Donald Trump had invoked his Fifth Amendment right against self-incrimination, and the following quote meme indicating that he had once claimed that invoking the Fifth Amendment was a clear indicator of guilt: 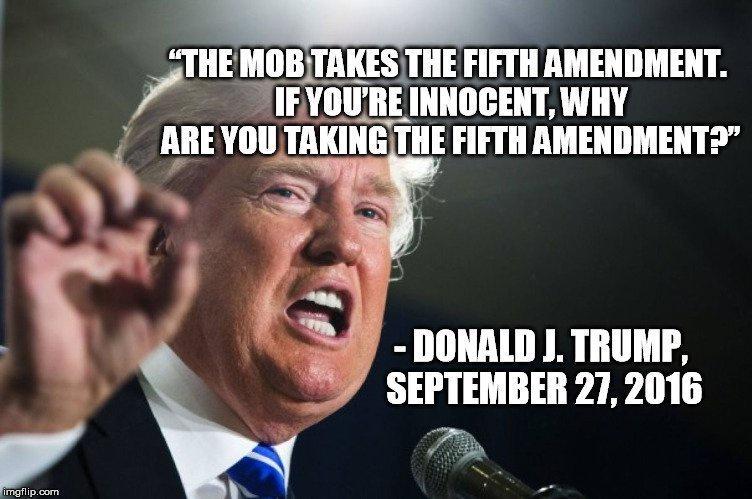 That post appeared one day after a wildly popular meme suggested that Trump had once said “anyone under investigation” by the Federal Bureau of Investigation (FBI) was unfit to hold office; we found no evidence the claim was accurate.

Text in the similar meme (above) read:

For initial context, “the Fifth” or “taking the Fifth” relates to the the fifth of 27 amendments to the United States Constitution. As written, the Fifth Amendment addresses, among other things, a United States citizen’s right to refuse to provide potentially incriminating evidence against themselves:

No person shall be held to answer for a capital, or otherwise infamous crime, unless on a presentment or indictment of a grand jury, except in cases arising in the land or naval forces, or in the militia, when in actual service in time of war or public danger; nor shall any person be subject for the same offense to be twice put in jeopardy of life or limb; nor shall be compelled in any criminal case to be a witness against himself, nor be deprived of life, liberty, or property, without due process of law; nor shall private property be taken for public use, without just compensation.

The first of the two images in the Imgur post showed an August 10 2022 New York Times liveblog, the headline of which at the time of the screenshot read, “Trump Invokes the Fifth Amendment in New York Deposition.” Three consecutive updated sections from the morning of August 10 2022 reported:

[At the deposition] Trump is declining to answer the attorney general’s questions, according to people with knowledge of the matter. He is invoking his Fifth Amendment right against self-incrimination.

Trump issued a statement shortly after the questioning began confirming that he was going to decline to answer questions from the attorney general. In the statement, Trump noted that he once asked, “If you’re innocent, why are you taking the Fifth Amendment?” He then added, “Now I know the answer to that question. When your family, your company, and all the people in your orbit have become the targets of an unfounded, politically motivated witch hunt supported by lawyers, prosecutors and the fake news media, you have no choice.”

Trump, in defending his decision to invoke his constitutional right against self-incrimination, said, “I have absolutely no choice because the current Administration and many prosecutors in this Country have lost all moral and ethical bounds of decency.” He added, “Under the advice of my counsel and for all of the above reasons, I declined to answer the questions under the rights and privileges afforded to every citizen under the United States Constitution.”

That coverage seemed to indicate that Trump himself had referenced his own previous statements about invoking the Fifth Amendment. In the statement, Trump acknowledged what he purportedly said, and offered an explanation alongside his now-revised opinion.

References to Trump’s previous statements about individuals invoking Fifth Amendment rights represented quite a large part of news coverage about the deposition on August 10 2022. A search for information about the quote led to a Google warning that search results were “changing quickly” and and that search-sorting could include unreliable sources as a result: 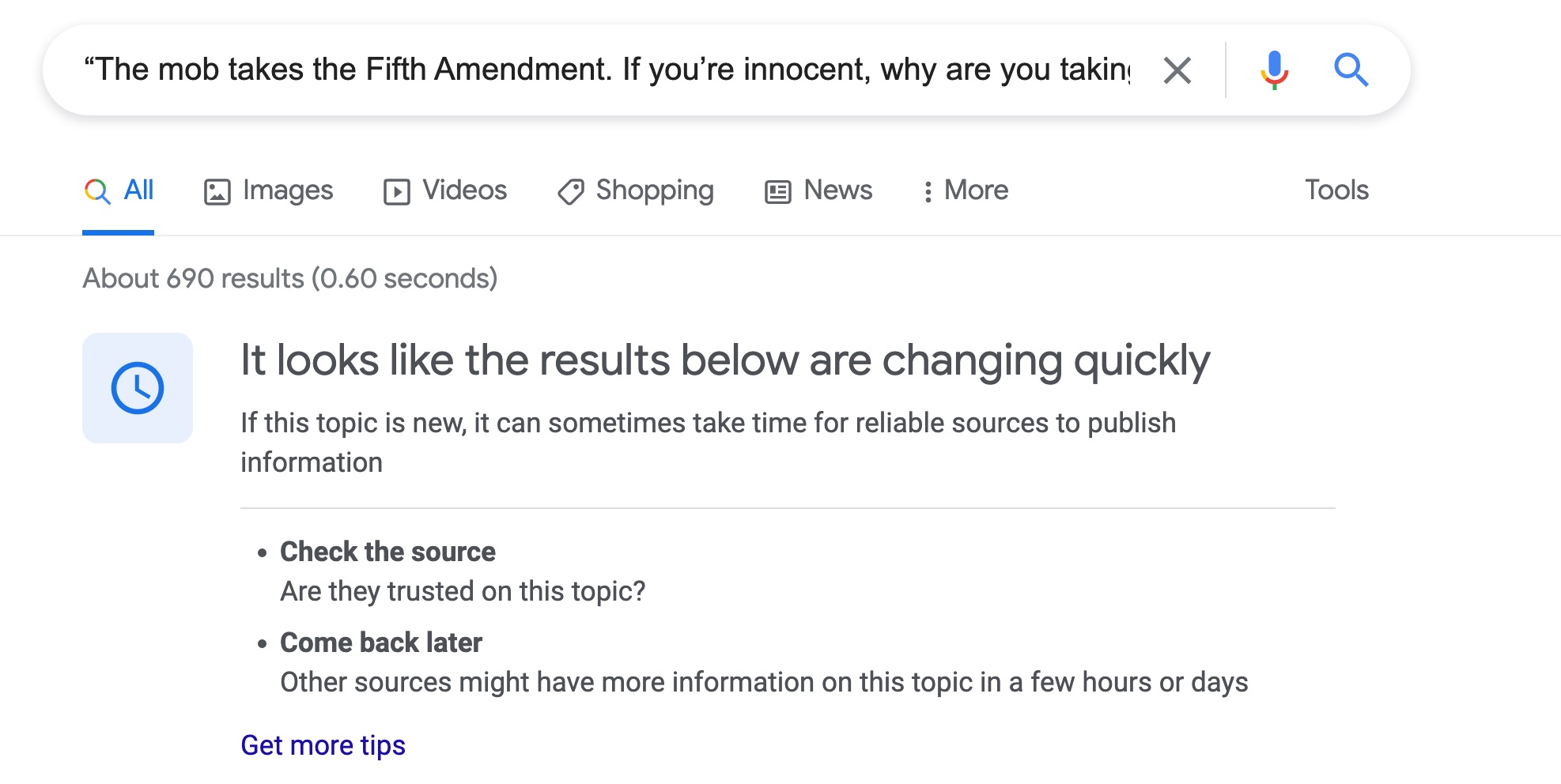 Google was correct in that the initial results were from August 10 2022. We limited results to those on or before August 2017, to sort for references to the original statement made by Trump.

A paywalled September 30 2016 Charlotte Observer article (“Trump blasts those who take the Fifth, but he used it 97 times on adultery questions”) included the quote, reporting on both his statement and an accusation that he had previously invoked a Fifth Amendment right during questioning:

On [September 28 2016], Donald Trump criticized a particular group of people who invoked [a Fifth Amendment] right: former staff members of Hillary Clinton called on to testify about her setting up a private email server.

That’s exactly the question Donald Trump was asked 26 years ago, in 1990 when he was in the midst of divorcing Marla Maples, according to the Huffington Post….

On August 10 2022, former United States President Donald Trump invoked his Fifth Amendment right not to incriminate himself in the course of a deposition. In response to the news, many commenters referenced a previous Trump statement (“The mob takes the Fifth Amendment. If you’re innocent, why are you taking the Fifth Amendment?”) in September 2016. The quote was real and accurately reiterated. However, Trump himself referenced his previous statement in August 2022, claiming that his situation was different — he had invoked his Fifth Amendment right to not incriminate himself due to “an unfounded, politically motivated witch hunt supported by lawyers, prosecutors and the fake news media.”