While Rep. Matt Gaetz of Florida was allowed to wear a gasmask on the House vote, Democrat Bobby L. Rush was removed from the same grounds for wearing a hoodie.

After Rep. Matt Gaetz (R-Florida) donned a gas mask while Congress debated a bill securing emergency funding to fight the spread of the COVID-19 coronavirus in the United States and beyond, one of his colleagues rebuked both him and an apparent set of double standards.

“In 2012, I wore a hoodie on the House Floor to make a statement about the deadly consequences of racial profiling,” Rep. Bobby L. Rush (D-Illinois) wrote on Twitter. “On Wednesday, @RepMattGaetz wore a gas mask in the chamber, making light of an epidemic that has killed 14 Americans. Guess which one of us was forcibly removed.” 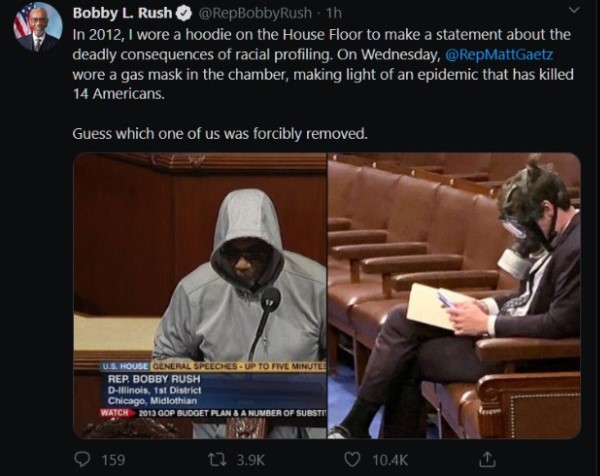 Rush, a former member of the Black Panthers liberation group who has represented Illinois’ 1st congressional district since 1993, was indeed stopped from speaking and ordered off of the floor on March 28 2012, after revealing that he was wearing a hooded sweater under his blazer in remarks criticizing racial profiling on the part of law enforcement:

As soon as Rush removed his jacket and put the hood on his head, Rep. Greg Harper, R-Mississippi, who was presiding over the House floor, began to gavel Rush down, saying he was out of order.

Rush ignored him, and with the hoodie still pulled over his head, continued to speak, citing the Bible.

Harper continued to bang the gavel. “The gentleman will suspend. The member is no longer recognized,” he said. “The chair must remind members that clause 5 of rule 17 prohibits the wearing of hats in the chamber when the House is in session.”

A floor clerk approached Rush as he finished his remarks and led him away from the podium.

Afterward, Rush told CNN he was wearing a tie, suggesting he was appropriately dressed for the House floor. He said the purpose of putting on the hoodie was to send a message to young people, “to stand their ground, stand up and don’t stand down.”

Rush’s comments came less than a month after the killing of 17-year-old Trayvon Martin in Florida by George Zimmerman, a “community watch” member who claimed that he shot and killed the teen in self defense. Martin’s death was the impetus for nationwide demonstrations, including the “Million Hoodie March” in New York City happening the same day Rush made his remarks:

Too often, this violent act that resulted in the violent murder of Trayvon Martin is repeated in the streets of our nation. I applaud the young people all across the land who are making a statement about hoodies [and] about the real hoodlums in this nation. Particularly those who tread on our laws wearing official or quasi-official clothes. Racial profiling has to stop, Mr. Speaker. Just because someone wears a hoodie does not make them a hoodlum.

After Rush donned the hood on his sweater, Mississippi Republican and acting Speaker Rep. Greg Harper said, “The gentleman will suspend. The member is no longer recognized.” Harper then ordered an aide to escort Rush from the House floor, citing a rule barring members from wearing coverings on their heads.

Martin’s father, Tracy Martin, later commended the lawmaker for his show of solidarity.

“My question would be why wasn’t Congressman Rush allowed to address racial profiling. This is something that needs to be talked about,” he said. “This is a country of freedom of speech.”

By comparison, Gaetz — a white Republican — was apparently not admonished at all for wearing a gas mask as he and his colleagues voted on the measure allocating $815.2 billion in funding to fighting COVID-19, commonly known as the coronavirus. He later claimed that he was doing so out of concern for his own safety. “Look, members of Congress are human petri dishes,” he said. “We fly through the dirtiest airports. We touch everyone we meet.”

As of March 7 2020, more than 225 COVID-19 cases had been diagnosed in the United States, and at least fourteen deaths have been attributed to the disease.

It is true that there has been a ban on hats on the floor while the House is in session since 1837. It’s also true that one could make the argument that a gas mask — which covers the face and part of the head — is not a hat. One could also make the same argument about a hoodie. Finally, it’s true that Rep. Bobby Rush was escorted out for pulling a hoodie over his head in 2012, and Rep. Matt Gaetz and his gas mask were allowed to stay in 2020.