Dallas Buyers Club was none other than Dr. Anthony Fauci." />
Skip to content

"Remember the movie 'Dallas Buyers Club' about a group of AIDS patients fighting for the right to use cheap, effective drugs against government bureaucrats in the pocket of Big Pharm? The bad guy was Dr. Anthony Fauci."

On December 12 2021, a smear meme circulated on Facebook and Twitter, asserting that the “bad guy” in the 2013 film Dallas Buyers Club was Dr. Anthony Fauci:

Atop a Dallas Buyers Club graphic and a black and white image of Fauci, text read:

Remember the movie ‘Dallas Buyers Club’ about a group of AIDS patients fighting for the right to use cheap, effective drugs against government bureaucrats in the pocket of Big Pharm? The bad guy was Dr. Anthony Fauci.

The claim looked a bit questionable right off the bat. In March 2020, Dr. Fauci rapidly became a household name (and later something of a scapegoat); were he so critical and loathsome in the plot of a high-profile film like Dallas Buyers Club, it seemed likely that circumstance would have already entered the discussion in the intervening year and a half between March 2020 and December 2021.

To examine that hunch, we first looked at Google Trends data on searches for “Dallas Buyers Club Fauci.” As it turned out, searches were virtually non-existent in the year-long period ending December 15 2021 (spiking only in November 2021): 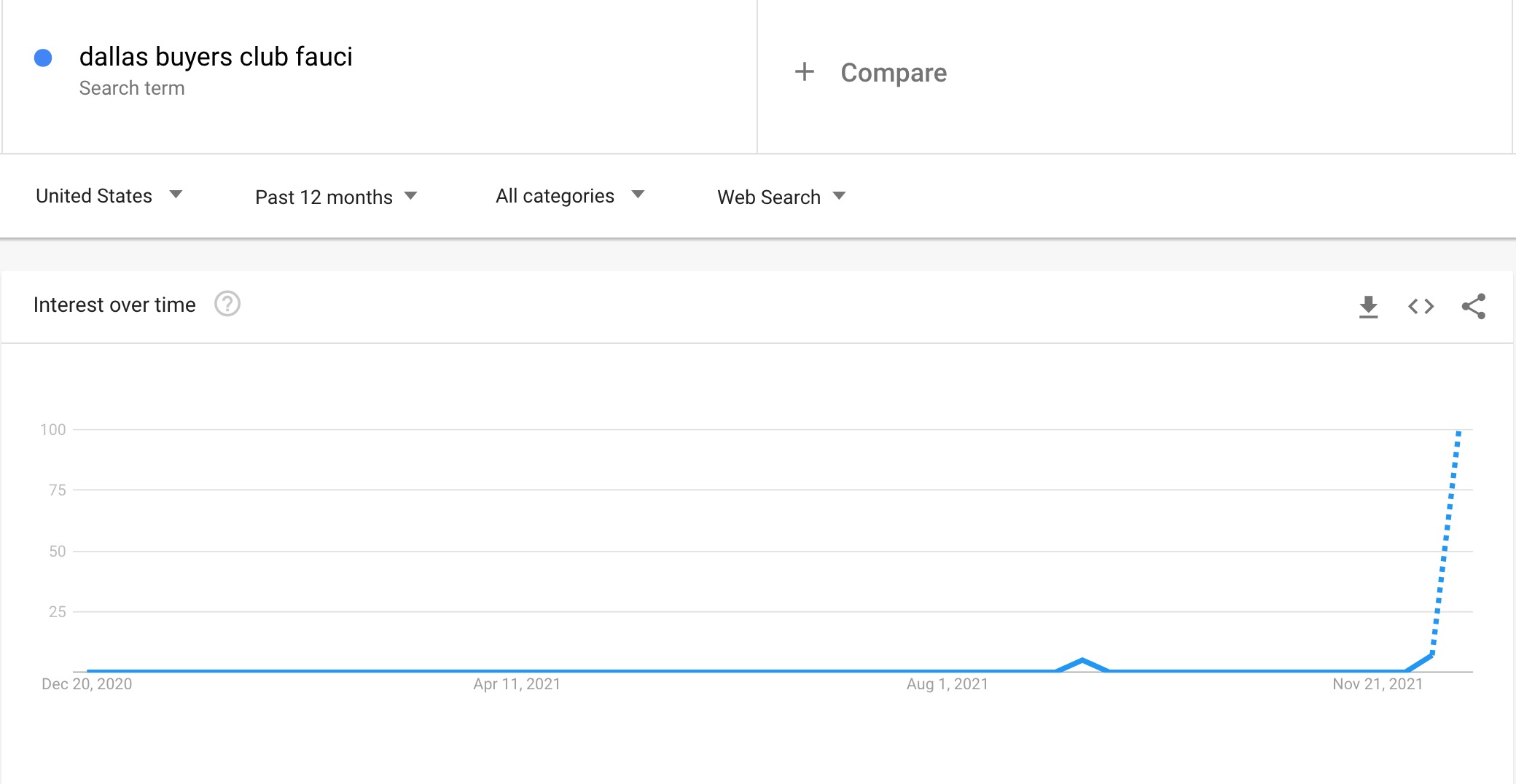 Next, we located a detailed plot summary for Dallas Buyers Club, in order to determine whether any plot points involved Fauci or characters based on him. A lengthy description of the plot of the film (which contains spoilers) described plot elements involving the “government” and the Food and Drug Administration (FDA):

[Main character Dallas electrician Ron] Woodroof begins selling [unapproved therapeutic] drugs on the street and at gay nightclubs. He comes back into contact with Rayon, with whom he reluctantly sets up business since she can bring many more clients. The pair establish the “Dallas Buyers Club”, charging $400 per month for membership, and it becomes extremely popular. He gradually begins to respect Rayon and think of her as a friend. When Woodroof has a heart attack caused by a recently acquired dose of interferon, Dr. Sevard learns of the club and the alternative medication. He is angry that it is interrupting [an ongoing] trial, while Richard Barkley of the FDA confiscates the interferon and threatens to have Woodroof arrested. Dr. Saks agrees that there are benefits to AIDS medicine buyers clubs (of which there are several around the country) but feels powerless to change anything. The processes that the FDA uses to research, test and approve drugs is seen as flawed and a part of the problem for AIDS patients. Dr. Saks and Woodroof strike up a friendship.

Barkley gets a police permit to raid the Buyers Club, but can do nothing but give Woodroof a fine. In 1987, the FDA changes its regulations such that any unapproved drug is also illegal. As the Club runs out of funds, Rayon, who is addicted to cocaine, begs her father for money and tells Woodroof that she has sold her life insurance policy to raise money. Woodroof travels to Mexico and gets more of the peptide T. Upon return, Ron finds out that Rayon died after being taken to the hospital. Dr. Saks is also upset by her death, and is asked to resign when the hospital discovers she is linking patients with the Buyers Club, having learned that AZT trials previously conducted in France had proven the drug to be ineffective against HIV. She refuses to comply and insists that she would have to be fired.

As time passes, Woodroof shows compassion towards gay, lesbian, and transgender members of the club and making money becomes less of a concern; his priority is provision of the drugs. Peptide T gets increasingly difficult to acquire, and in 1987 he files a lawsuit against the FDA. He seeks the legal right to take the protein, which has been confirmed as non-toxic but is still not approved. The judge is compassionate toward him and admonishes the FDA, but lacks the legal tools to do anything. As the film ends, on-screen text reveals that the FDA later allowed Woodroof to take peptide T for personal use and that he died of AIDS in 1992, seven years later than his doctors initially predicted.

It’s true that Woodruff was a real-life AIDS patient in the 1990s, but we found nothing anywhere to indicate that any of the characters were based on Fauci. Moreover, Woodruff’s real-life attempts to enable access to new and experimental treatments for AIDS patients was described as involving the Food and Drug Administration, whereas Fauci became director of the National Institute of Allergy and Infectious Diseases (NIAID) in 1984.

His biography on the “Director” page of NIAID’s website read:

Dr. Fauci was appointed Director of NIAID in 1984. He oversees an extensive research portfolio of basic and applied research to prevent, diagnose, and treat established infectious diseases such as HIV/AIDS, respiratory infections, diarrheal diseases, tuberculosis and malaria as well as emerging diseases such as Ebola and Zika. NIAID also supports research on transplantation and immune-related illnesses, including autoimmune disorders, asthma and allergies. The NIAID budget for fiscal year 2021 is an estimated $6.1 billion.

Dr. Fauci has advised seven Presidents on HIV/AIDS and many other domestic and global health issues. He was one of the principal architects of the President’s Emergency Plan for AIDS Relief (PEPFAR), a program that has saved millions of lives throughout the developing world.

In an attempt to locate any indication that the idea Fauci was Dallas Buyers Club‘s bad guy existed before the events of 2020, we searched for “‘Dallas Buyers Club‘ Fauci” and restricted results to content dated before December 2019. Only 81 total results were returned.

The first result was a December 10 2013 Washington Post piece, “What ‘Dallas Buyers Club’ got wrong about the AIDS crisis.” It did not mention Fauci once, nor did it mention NIAID as a “bad guy” in the film. A relevant section about the “government” detailed the conflict on-screen, contrasted with real-life events:

The issue is that the FDA was a [medically] conservative institution which, because of incidents such as the too-hasty approval of thalidomide (a drug that treated anxiety, nausea and morning sickness but could cause birth defects when used by pregnant women), was traditionally quite cautious about approving new treatments. But it also realized that a laxer approach is called for when dealing with a disease that’s 100 percent fatal. The administration started fast-tracking trials for HIV/AIDS treatments, and by 1984 (before Woodroof’s diagnosis) the FDA started to loosen the regulatory reins, eventually providing some early access to experimental therapies.

What’s more, the FDA was actually fairly cooperative with buyers clubs within a year of their initial formation. “The FDA caved to almost all the demands of AIDS activists and became basically our partner going forward in the 1990s,” [HIV activist Peter] Staley recalls. “The true story was that we made the system bend, and we used the system and needed the system. I wouldn’t be alive today without the companies this film paints as evil, and I wouldn’t be alive today without civil servants at the FDA who worked incredibly hard in the 1990s to get these drugs out there quickly.”

Woodroof’s club did have issues with the FDA, but that was because of his reluctance to stop using harmful treatments like Compound Q. “On these rare occasions the FDA said, ‘You’re selling something that’s killing people,’ the Dallas club was the only one that wouldn’t cooperate like that and that’s what got him in trouble,” Staley says. And even when that happened, the dramatic raids portrayed in the film didn’t ensue, Staley claims. Woodroof’s troubles played out in court, not through big, flashy law enforcement action.

Result number two was a Washingtonian.com Academy Awards article from early 2014. Fauci’s name was mentioned, but not as an antagonist in the film or real-life events:

Dallas Buyers Club. As Ron Woodroof, an HIV-positive Texas electrician, Matthew McConaughey denounces the FDA’s favored AIDS drug in the 1980s, AZT. Anthony Fauci, director of NIH’s National Institute of Allergy and Infectious Diseases, says Woodroof was right: The drug wasn’t effective on its own. But Fauci notes that the FDA eventually came up with a better remedy, and he defends the agency’s effort to save lives. AZT, Fauci says, “was the only drug we had.”

By the third result, we were already running into dead links and shakier sources, such as an iHeart page concerning a 2017 podcast episode, “The Ethical Challenges of Addressing the HIV/AIDS Pandemic.” We were unable to retrieve an archived version, but a SoundCloud summary indicated that Fauci was not being referenced as an antagonist in the film (which, again, was described as the FDA):

In [this 2017] episode of More than Meets the IRB, we hear from awardee of the Presidential Medal of Honor Dr. Anthony Fauci on some of the ethical challenges he faced in addressing the HIV/AIDS pandemic. It’s an engaging and wide-ranging narrative: from Fauci’s publicly denouncing the FDA’s process of delivering certain drugs to individuals to his receiving presidential acknowledgement for a creative idea of how to bring drug access to these patients.

Dr. Anthony Fauci has been the director of the National Institute of Allergy and Infectious disease for over 30 years. He has played a critical role in research of HIV/AIDS and other immunodeficiencies.

When the government didn’t make available certain drugs quickly to the community of HIV/AIDS patients, they would acquire them through illicit groups known as Buyers Clubs (as featured in the 2013 film The Dallas Buyers Club).

From there, results typically did not seem to involve Fauci in relation to the events of the film. Fauci was mentioned in the fourth link as having attended a funeral during the AIDS crisis, and wasn’t referenced by name or description in the fifth result at all.

A December 2021 meme claimed 2013 film Dallas Buyers Club‘s bad guy was Dr. Anthony Fauci, an inherently iffy claim contrasted with Fauci’s high profile from March 2020 onward. We were unable to connect Fauci to the events of the film at all, and when “the government” was referenced in summaries, it was the FDA, not the NIAID. In the rare instances Fauci’s name was mentioned in conjunction with the film, it was to offer retrospective context about the HIV and AIDS crises.