The planet is likely to lose two-thirds of its animals by 2020.

In early March 2019, a Facebook user shared a screenshot (archived here) of a tweet sent the same day, which admonished followers of a scandal involving the Kardashian family. That post claimed that while readers were busy on Kardashian gossip, two-thirds of the Earth’s animals were in the process of being eradicated by 2020:

lmagine if every person who is talking about jordyn, khloe, tristan, and the kardashians right now was instead raising awareness for something that matters, like the fact that by 2020, we may lose two thirds of all animals due to climate change

A photograph contrasted a screenshot of Twitter’s trending topics with a photograph of an apparently emaciated polar bear: 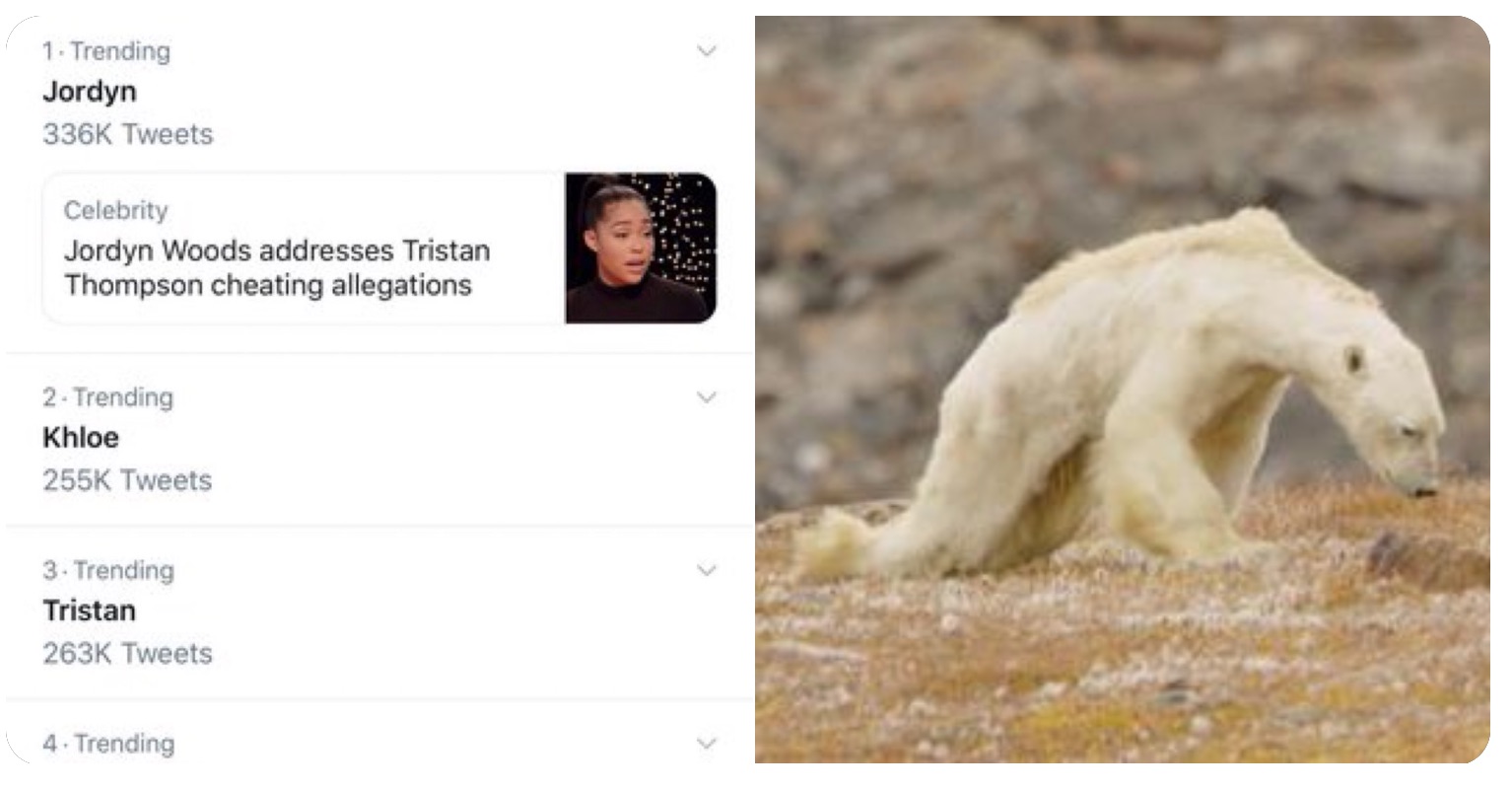 The original tweet and the Facebook iteration were shared hundreds of thousands of times. The first part of the tweet was sheer opinion: That discussing a love triangle between Khloe Kardashian, Tristan Thompson, and Kardashian-adjacent individual Jordyn Woods is unimportant. What was important important, the original user observed, was that a stunning two-thirds of Earth’s animals were going to die off by the year 2020.

The original tweet was published on March 2 2019. The information it presented appeared in several news articles, but from October 2016, not 2019. At that time, National Geographic published an article titled “World to Lose Two-Thirds of Wild Animals by 2020?” The Guardian‘s headline was also less declarative, missing the question mark but placing responsibility for its claim elsewhere: “World on track to lose two-thirds of wild animals by 2020, major report warns.” CNN also used the form of a question in their reporting, “Sixth mass extinction? Two-thirds of wildlife may be gone by 2020: WWF.”

An incendiary new report from two major conservation groups predicts dire circumstances for the world’s wild animals, warning that two-thirds of vertebrate populations could be wiped out by 2020, based on 1970 population levels.

The new report, called the Living Planet Index, was prepared by the World Wildlife Fund and the Zoological Society of London. The index found that animal populations dropped by 58 percent between 1970 and 2012, largely as a result of human activities, from poaching to habitat loss and pollution.

More than two thirds of the world’s wildlife could be gone by the end of the decade if action isn’t taken soon, a new report from the World Wildlife Fund revealed [in October 2016].

Since 1970, there has already been a 58% overall decline in the numbers of fish, mammals, birds and reptiles worldwide, according to the WWF’s latest bi-annual Living Planet Index.

Further down the page in the National Geographic report was commentary from another conservation scientist, disputing the breadth and certainty of the statements:

But hang on, says National Geographic explorer and conservation scientist Stuart Pimm of Duke University, who was not involved with the report.

“Trying to take all those different data sets, from all over the world, and putting that in a blender and trying to break that down into one number is irresponsible,” Pimm says. “That’s disingenuous and not helpful.”

Pimm says there is far too much variability across different regions, from the land to the sea, and too much uncertainty to predict a dire crash of all species. Further, the report “depresses people to no end, and suggests there is no hope,” he says.

“But there is a lot of hope around the world,” Pimm adds.

He points to the recent successes in stemming the decline of lions, tigers, and other big cats across Africa and Asia, some of which has been spearheaded by National Geographic’s Big Cats Initiative, which Pimm works on.

As another example, a recent study found that coral reefs are actually doing better, and are more resilient in the face of warming seas and acidification, than scientists had thought.

Even one of the primary sources leading with the “two-thirds of animals by 2020” claim dialed it back a bit in the same piece, noting that emerging data pointed to potential efficacy of ongoing conservation efforts. That item included further comment from Pimm, who maintained that the warnings were important — but offered an important addendum:

Although conservationists face many challenges in protecting endangered species and their habitat, the actual issues they face are more varied and subtle than a single number of index can convey, says Pimm.

Such reports may be more about trying to grab attention and raise money than sound science, he says.

Another conservation scientist quoted by the outlet concurred with Pimm about the nature of such news-grabbing claims, adding, however, that there was “no question that a great number of populations of myriad species are in substantial decline.” In other words, some conservation scientists felt that the cause at the heart of the headlines was legitimate — but not the alarmism in the coverage.

The viral claim was based on the Living Planet Report from 2016. The report is compiled every two years, and a subsequent report was published in 2018. At that time, the same frightening headlines about two-thirds of animals going extinct by 2020 did not appear.

National Geographic was one of the few outlets to cover the 2018 iteration of the report around the same time of year the 2016 report was distributed. In sharp contrast with its 2016 report, a November 1 2018 article was titled “Widely misinterpreted report still shows catastrophic animal decline.” It didn’t mention 2016 or 2020, reporting instead:

The Living Planet Index has taken a sudden nosedive—it’s down 60 percent since 1970, the blink of an eye in evolutionary time. And we’re all invested.

The Living Planet Index (LPI) combines data on thousands of species with very different lifestyles and very different conservation statuses. It’s not a census in which a Eurasian pygmy shrew—of which there are plenty—would be given equal weight to a critically endangered Sumatran rhinoceros.

The LPI takes into account the fact that one less rhino is, for its overall population, a very big deal. But a few thousand fewer pygmy shrews is pretty trivial; it could be chalked up to a rounding error. Some populations in the study lost far more than 60 percent of their individuals, and some lost far fewer. But the average represented by the LPI speaks to a catastrophic global trend.

Stated another way, the report found that populations of vertebrates (animals with backbones) declined by 60 percent on average. But that’s not the same as saying that we’ve wiped out 60 percent of all animals, which the report makes clear.

Let’s say for example you have 50 tigers, 200 falcons, and 10,000 squirrels. Let’s say the first population declines by 90 percent, to 5 tigers. The second declines 80 percent, to 40 falcons. And the squirrels drop to 9,000—a 10 percent fall. That’s a 60 percent average decline of these three fictitious populations, but only a total decline of 12 percent of the individuals.

It’s not precisely clear what transpired between the apocalyptic Living Planet Index 2016 reports (the source of the 2020 claim) and the toned down, less prevalent coverage of the same report in 2018. In its 2018 coverage, National Geographic adopted a far more analytical approach than in the 2016 version.

The viral claim it was a “fact that by 2020, we may lose two thirds of all animals due to climate change” was not cited, but appeared to be based on a report of impending wildlife disaster in 2016. The report was real, but highly misleading as presented in March 2019. In 2018, the report did not appear to involve the same dire predictions (nor did it even mention the year 2020), and consequently it did not receive the same coverage.