After having Chelsea Manning imprisoned for refusing to comply with a subpoena, United States Attorney General William Barr also refused to honor one.

The graphic itself has been shared thousands of times on social media: 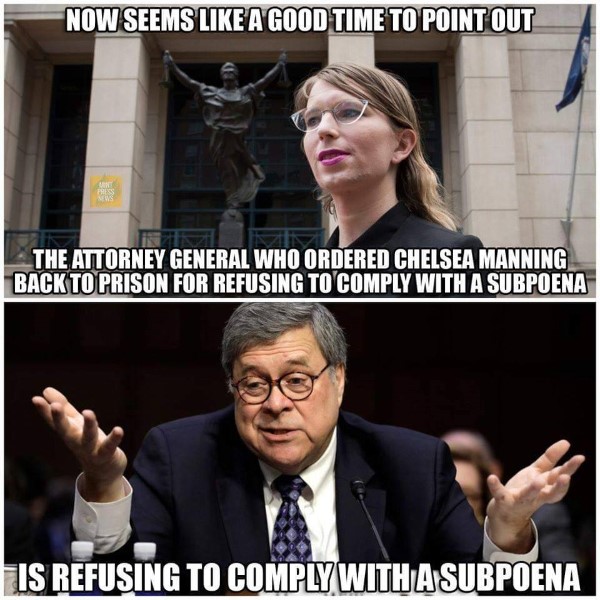 In reality, it was federal judge Anthony Trenga who ordered Manning to be re-incarcerated in May 2019, after she refused to testify to a grand jury in connection with an investigation into the classified media disclosure site Wikileaks.

The order a week came after Manning — a former Army intelligence officer who had previously served seven years in prison for providing information to the site — had been released following a separate eighteen-month stint in jail for refusing to comply with a grand jury. In August 2019, Trenga also ordered that Manning’s latest contempt sentence could not exceed eighteen months.

According to federal law, Trenga was able to use his discretion on whether to jail Manning, who was considered a recalcitrant witness and told the judge that she “would rather starve to death” than cooperate with a grand jury. Had Trenga felt that jailing Manning would be punitive, rather than a means to coerce testimony from her, she would not have been jailed.

While Barr did not order Manning to be jailed, however, he has also refused to comply with a subpoena related to United States President Donald Trump’s push to add a question related to citizenship and documentation to the 2020 census. In July 2019, the House of Representatives voted to hold both Barr and Commerce Secretary Wilbur Ross in contempt for their failure to comply.