When writing a check, be sure to write "CE" for Common Era on the date to avoid against check-tampering.

A long-running debate off and on social media somehow managed to loop a type of beer into a discussion around how to denote the historical timeline in January 2020: 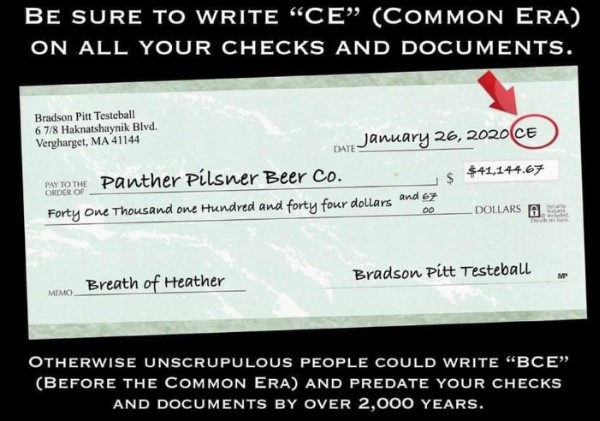 The meme, which has spread around Twitter and Facebook, shows a check made out to “Panther Pilsner Beer” and the following caption:

While it is unclear whether writing CE or BCE on a check would affect one’s ability to cash it in any way, educators have had a legitimate disagreement over whether to use the two terms in place of the more common “BC” (Before Christ) and “AD” (Anno Dominei, meaning “In the Year of Our Lord.”)

For years, articles and op-eds in various publications have described a sea change in scholastic circles toward using CE and BCE, the designations found in the Hebrew calendar. In 1997, for instance, author and former White House speechwriter William Safire said in his New York Times column that those terms had found widespread use among his readership:

From Prof. Harold Bloom of Yale, my Bronx Science classmate whose landmark book “The Western Canon” booms across the Kulturkampf battlefields: “Every scholar I know uses B.C.E. and shuns A.D.”

The shunning of A.D. (like the one that sits wrongly placed on the moon) goes clear up to the Supreme Court. Adena K. Berkowitz, who has both a law degree and a doctorate in Hebrew literature, applied to practice before the Court. “In the application,” she wrote, “I was asked if I wished ‘in the year of our Lord’ to be included as part of the date listed on the certificate or omitted.” She chose to omit: “Given the multicultural society that we live in, the traditional Jewish designations — B.C.E. and C.E. — cast a wider net of inclusion, if I may be so politically correct.”

That application form reflects a new sensitivity in Washington; a Court spokesman said that the choice is only 11 months old. By nearly 2 to 1, other scholars and some members of the clergy agreed with Bloom and Berkowitz. “Christians could be a little less triumphal,” noted the Rev. Charles B. Atcheson, rector of All Saints Church in Waterloo, Belgium. “Yes, the world has largely accepted the Christian calendar scheme that begins, a little inaccurately, with the birth of Jesus, but calling it ‘the common era’ is not a great loss and could be taken as a sign of acceptance of others. It will not be lost on anyone what happened shortly before the year 1.”

Eight years later, the Associated Press reported that “educators and historians say schools from North America to Australia” had been making the same change in denomination.

According to that report, textbooks and state exams in New York state still used BC and AD but allowed students to use the Hebrew denominations as well. Steven M. Brown, who at the time was dean of the William Davidson Graduate School of Jewish Education at the Jewish Theological Seminary in New York City, told the wire service that using BC and AD was difficult for Jews or Muslims.

“They are hard for non-Jews, because they assume a centrality of Jesus,” Brown said. “It’s not offensive, but it’s not sensitive to my religious sensibilities.”

At the same time, religious-minded educators like Candace de Russy — a trustee at the State University of New York at the time — sharply criticized deviating from the use of those terms.

“The use of BCE and CE is not mere verbal tweaking; rather, it is integral to the leftist language police — a concerted attack on the religious foundation of our social and political order,” said de Russy, who would go on to be a contributor at the conservative National Review. “Has anyone actually been oppressed by the use of BC and AD? And do not BCE and CE implicitly refer to Christ? That is, when did the common era begin, after all?”

The reference to “Panther Pilsner Beer” in the meme is an apparent reference to the Three Stooges movie Beer Barrel Polecats, in which the titular trio tries to homebrew the beverage according to the recipe from beermaker J. Panther Pilsner: 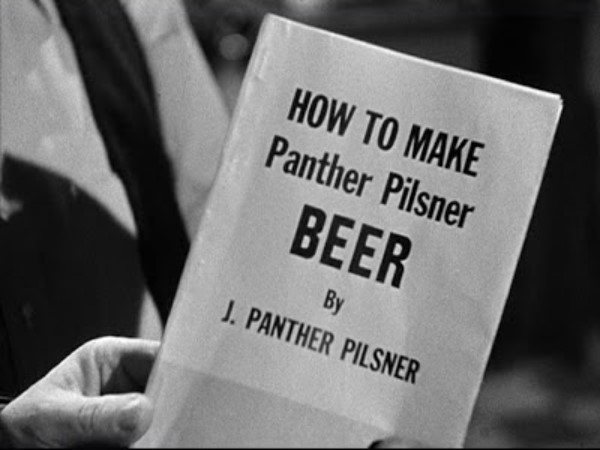 A beer by the same name is available in real life at a brewery in Madison, Indiana. It is unclear if it followed the process laid out in the movie. However, we remain unclear on the meaning of “Breath of Heather.”