A popular January 19 2022 post alerted readers to the existence of 12ft.io, a site that purportedly bypasses paywalls on news sites: 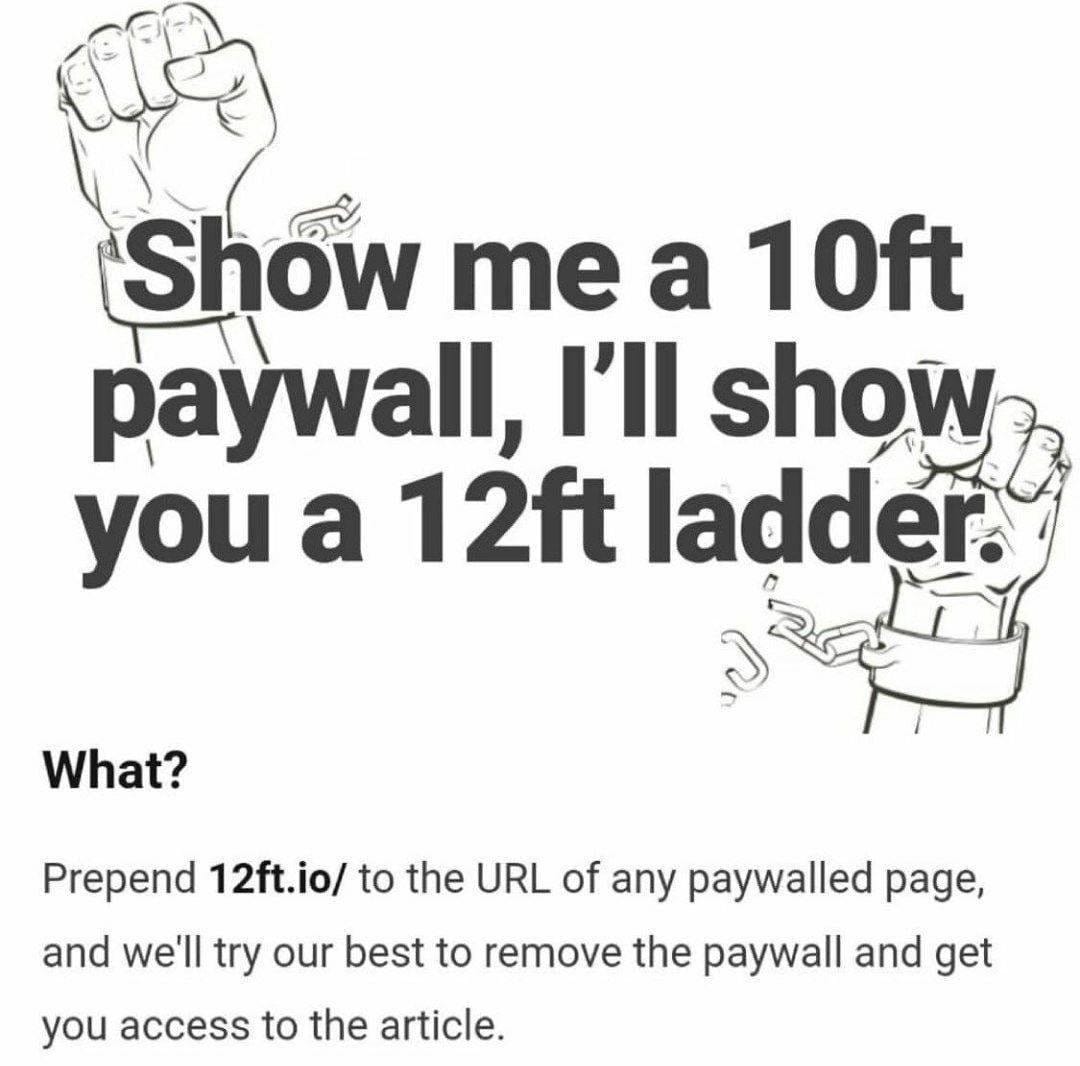 An attached image featured a graphic of hands and a broken chain. Text on the image read:

Prepend 12ft.io/ to the URL of any paywalled page, and we’ll try our best to remove the paywall and get you access to the article.

“Show me a [ten foot] paywall …” appeared to be a reference to a variation of a quote about walls, one which often appears in discussions about the efficacy (or lack thereof) of border walls:

Broadly, paywalls are a contentious issue in journalism; one school of thought holds that they are integral to funding newsrooms, while addresses concerns about the effects they can have on general news literacy. That debate was illustrated in a viral 2019 tweet from a since-deleted account detailing where paywalls tend to appear:

Why people are so stupid nowadays from WhitePeopleTwitter

That February 2019 tweet described how typically neutral sources were obscured by even “soft” paywalls (enabling a number of free views per month), whereas heavily partisan sites are ad-supported and often seem to be extremely accessible:

It’s infuriating how often I google a story to verify it, and the results are:

Guess what people end up reading when this happens?

Paywalls (and their tendency to depress the spread of credible sources on social media, in turn creating an information landscape tailor-made to amplify less credible sources) became a large topic of discussion during the early days of the COVID-19 pandemic, when disinformation was moving at breakneck speeds. A year into the pandemic, Columbia Journalism Review’s “What the pandemic means for paywalls” examined the state of access to credible news:

A year [before March 2021], major publications across the United States partially or completely lowered their paywalls. The idea was that information about the outbreak of covid-19 had life-saving potential, and so it should be available to everyone, not just to subscribers—a fraction of news readers who tend to be the wealthiest and most highly-educated. Lowering paywalls was ethically sound. But it now raises important questions for media outlets: How long can they afford to keep their journalism free? And how will they determine which reporting is “essential” to the public?

That seemed to happen for The Atlantic, which received early praise for removing its paywall on coronavirus stories … as the months went by, the coronavirus proved not to have been the only subject requiring intense service-journalism: police brutality, Black Lives Matter protests, and the presidential election all carried life-or-death stakes … recently, even pandemic stories have been paywalled; a recent visit to The Atlantic showed that some articles were free, others not.

The willingness to remove barriers may cast doubt on the common presumption that paywalls are an unfortunate necessity in journalism, an essential public good that is expensive to produce. And paywalls do not affect all readers the same way. As Current Affairs pointed out last August [2020], “The Truth Is Paywalled But The Lies Are Free”; many left-leaning publications that thoroughly research and fact-check their articles paywall their journalism, while right-wing media disseminates conspiracies and racism to anyone who’ll click. Only about sixteen percent of news-readers in the United States pay for subscriptions, which means that everyone else is locked out of knowledge, and likely to encounter a disproportionate amount of far-right fodder, often strewn with misinformation.

In the graphic above, the meme stated 12ft.io would “try our best to remove the paywall and get you access to the article.”

Two of the frequently paywalled outlets mentioned in the 2019 tweet (the New York Times and the Washington Post) maintain “soft paywalls.” Those allow readers a set number of free views per month (typically three to five) before cutting off access to the site.

12ft has been disabled for this site

Next we used the site to open a Washington Post article about a Long Island, New York grandmother who outwitted scammers. 12ft.io removed the paywall, enabling access to the content — but the image remained blurred, a minor vestige of the paywall.

Third, we attempted to access an article on Rolling Stone, reporting on a January 2022 disinformation controversy involving Spotify and Joe Rogan. We hit a paywall opening the link directly, but 12ft.io removed it and enabled access to the piece.

A January 2022 Facebook post promoted 12ft.io, a website designed to bypass paywalled news. The existence of paywalls have long been part of a discussion about access to credible news, one that picked up during the events of 2020 and 2021. Of the four sites we attempted to access, only one major, general outlet blocked 12ft.io’s service (another financial site wasn’t accessible either). The site worked for the other two, and seemed to be a useful tool for news readers stymied by lack of access to credible news sources. 12ft.io didn’t claim to universally remove paywalls, so we rated the post Decontextualized, due to some limits in its ability to enable access to news.