President Franklin D. Roosevelt said: "... no business which depends for existence on paying less than living wages to its workers has any right to continue in this country." 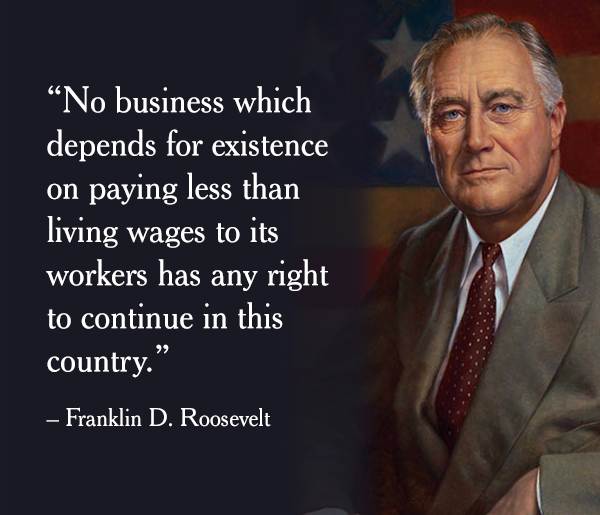 On the right side of the meme was a portrait-style image of U.S. President Franklin D. Roosevelt. To the left was text, which said:

“No business which depends for existence on paying less than living wages to its workers has any right to continue in this country.”

No specific citation or source for the quote was included with the submission.

Discourse about a stagnant federal minimum wage remained a popular topic of discussion on social media platforms like Imgur, often in contrast with the historical buying power of that rate:

Roosevelt was the president in office at the time the minimum wage was introduced in the United States in 1938:

On Twitter, the quote was shared in 2021 by Seattle-based chief executive officer. Dan Price. Price also attributed it to Roosevelt, and added the following commentary:

"No business which depends for existence on paying less than living wages to its workers has any right to continue in this country."

FDR said that 88 years ago. And we're still bending over backward to subsidize millionaires and billionaires to pay $10/hour with no benefits.

We were easily able to track down the quote on the website for the Franklin D. Roosevelt Library and Museum, on a page titled “Franklin Roosevelt’s Statement on the National Industrial Recovery Act,” dated June 16 1933. It appeared in the fourth paragraph:

The law I have just signed was passed to put people back to work, to let them buy more of the products of farms and factories and start our business at a living rate again. This task is in two stages; first, to get many hundreds of thousands of the unemployed back on the payroll by snowfall and, second, to plan for a better future for the longer pull. While we shall not neglect the second, the first stage is an emergency job. It has the right of way.

The second part of the Act gives employment through a vast program of public works. Our studies show that we should be able to hire many men at once and to step up to about a million new jobs by October 1st, and a much greater number later. We must put at the head of our list those works which are fully ready to start now. Our first purpose is to create employment as fast as we can, but we should not pour money into unproved projects.

We have worked out our plans for action. Some of the work will start tomorrow. I am making available $400,000,000 for State roads under regulations which I have just signed, and I am told that the States will get this work under way at once. I have also just released over $200,000,000 for the Navy to start building ships under the London Treaty.

In my Inaugural I laid down the simple proposition that nobody is going to starve in this country. It seems to me to be equally plain that no business which depends for existence on paying less than living wages to its workers has any right to continue in this country. By “business” I mean the whole of commerce as well as the whole of industry; by workers I mean all workers, the white collar class as well as the men in overalls; and by living wages I mean more than a bare subsistence level-I mean the wages of decent living.

A January 2022 meme claimed that Roosevelt said “no business which depends for existence on paying less than living wages to its workers has any right to continue in this country.” That was half of a longer sentence from the 1933 text quoted above, in which Franklin Delano Roosevelt first said that “nobody is going to starve” in the United States. Roosevelt added that it was “equally plain” businesses that didn’t pay a living wage had no “right to continue” operating in the United States.