"A very telling thing about American democracy is that the maximum legal campaign donation is indexed to inflation, but the minimum wage is not."

On December 1 2021, Imgur user Lanhdanan shared an undated Twitter screenshot with an uncited claim that maximum campaign donations were tied to inflation — but the federal minimum wage was not: 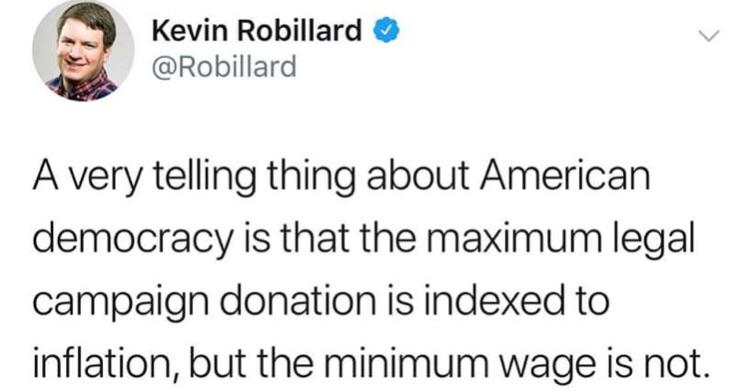 Although, as mentioned, the context of the date was missing from the tweet, it was live as of December 2021. It was originally tweeted by @Robillard on May 7 2019, and read:

A very telling thing about American democracy is that the maximum legal campaign donation is indexed to inflation, but the minimum wage is not.

In plainer words, the tweet observed that United States lawmakers were clearly aware of the effects of inflation on fixed rates when it applied to how much money politicians can legally receive — but when it came to wages for average Americans, the same acknowledgment of inflation did not apply.

What Does ‘Indexed to Inflation’ Mean?

“Indexation” is an aspect of monetary policy, enabling elements of a financial system to be calibrated to a wider range of values in any given economy:

Indexation is a system or technique used by organizations or governments to connect prices and asset values. This is done by linking adjustments made to the value of a good, price of a service, or another specified value to a predetermined price or composite index. Indexation requires identifying a price index and determining whether linking the value to the price index will accomplish the organization’s goals. Indexation is most commonly used with wages in a high-inflation environment. Indexation is also known as escalating.

Indexing a given price or payment to other prices can serve two main purposes. It can be used either to maintain a stable relative price between two or more goods or services or to maintain a stable real price of a good or service relative to the purchasing power of a currency unit. Indexation is a pre-specified process, meaning that all parties involved are typically aware of how the link works … Businesses may use this type of indexation to match an employee’s salary increases to the inflation rate, meaning that an increase in the consumer price level over a period of time will lead to an increase in salary. This particular type of indexation is called a cost of living increase (COLA).

Khan Academy’s Macroeconomics unit included information about the relationship between indexation and inflation (when the value of currency is weakened in relation to basic goods and services), explaining:

When a price, wage, or interest rate is adjusted automatically with inflation, it is said to be indexed. An indexed payment increases according to the index number that measures inflation.

A wide array of indexing arrangements is observed in private markets and government programs. Since the negative effects of inflation depend in large part on having inflation unexpectedly affect one part of the economy but not another—say, increasing the prices that people pay but not the wages that workers receive—indexing can take some of the sting out of inflation.

However, some of the fiercest opponents of inflation express grave concern about indexing. They point out that indexing is always partial. Not every employer will provide COLAs for workers. Not all companies can assume that costs and revenues will rise in lockstep with the general rates of inflation. Not all interest rates for borrowers and savers will change to match inflation exactly. But as partial inflation indexing spreads, the political opposition to inflation may diminish. After all, older people whose Social Security benefits are protected against inflation or banks that have loaned their money with adjustable-rate loans no longer have as much reason to care whether inflation heats up.

Is the Maximum Legal Campaign Donation in the United States Indexed to Inflation?

Determining whether the first half of the claim was accurate proved to be very straightfoward.

Under the Federal Election Campaign Act, certain contribution limits are indexed for inflation every two years, based on the change in the cost of living since 2001, which is the base year for adjusting these limits. The inflation-adjusted limits are:

In other words, limits on political contributions to campaigns are adjusted every other year, increasing the legal maximum donation threshold to account for inflation. According to the FEC, updated contribution levels for each two-year bracket are published in the Federal Register.

Is the Federal Minimum Wage Indexed to Inflation?

In 1938, the Fair Labor Standards Act (FLSA) established a federal minimum wage of $0.25 per hour. The minimum wage provisions of the FLSA have been amended numerous times since then, typically for the purpose of expanding coverage or raising the wage rate. Since its establishment, the minimum wage rate has been raised 22 separate times, most recently in 2007-2009 when it was increased from $5.15 per hour to its current rate of $7.25 per hour in three steps.

In [a then-recent] town hall, [President Joe] Biden was referencing a data point from the Center for Economic and Policy Research, a progressive think tank, the White House told CNN. It looked at what the federal minimum wage would be if it kept up with productivity growth. The answer: $24 an hour … Inflation has also been eating away at the buying power of the federal minimum wage for the last few decades.

The wage hit its peak in inflation-adjusted terms in 1968 at just over $12. Though it has been raised 14 times since then, it has not kept pace with the cost of living. The current nearly 12-year stretch is the longest it’s gone without a boost.

This decline in purchasing power means low-wage workers have to work longer hours now just to achieve the standard of living that was considered the bare minimum half a century ago. Since the 1960s, the United States has achieved tremendous improvements in labor productivity that could have allowed workers at all pay levels to enjoy a significantly improved quality of life (Bivens et al. 2014). Instead, because of policymakers’ failure to preserve this basic labor standard, a parent who is the sole breadwinner for her family and who is earning the minimum wage today does not earn enough through full-time work to bring her family above the federal poverty line.)

What Would the Federal Minimum Wage Be If It Were Indexed to Inflation?

Due to the fact the federal minimum wage had been static for more than a decade as of December 2021, determining an accurate adjustment for inflation was difficult.

An April 2021 Chicago Tribune piece (“How much the US minimum wage was actually worth the year you were born”) about the minimum wage’s relative buying power over the years explained that any figure would be tacked to relative fluctuations in the rate since its inception:

A December 1 2021 Imgur screenshot of a 2019 tweet suggested that “the maximum legal campaign donation is indexed to inflation, but the minimum wage is not.” Indexation is an economic strategy to calibrate aspects of the economy to other aspects. By merit of remaining static since 2009, the $7.25 federal minimum wage is quite clearly not indexed to inflation — and by some measures, indexing the rate to productivity would involve raising it to $24 an hour. Although arriving at a speculative fair minimum wage adjusted for inflation to 2021 was difficult, the tweet itself was accurate. The government indeed adjusts the cap on campaign contributions every other year, but as of November 2021, it has not indexed the federal minimum wage to any other metrics such as productivity or inflation.