To delay student loan debt collectors, borrowers can demand that they show proof they hold the borrower's original promissory note.

Social media users relying on a graphic circulating online in January 2022 to hold student loan debt collectors at bay should be wary.

The graphic, which surfaced in January 2022, pushes the claim that a person had “sent four student loan debt collectors packing” by arguing that — since their loan had been sold to a separate vendor as Student Loan Asset Backed Securities (SLABS for short) — the collection agency did not have the original document showing the debt and thus could not collect on it.

A transcript of the claim reads:

I have sent four student loan debt collectors packing using the Fair Debt Collection Practices Act. It’s an easy read for anyone into that sort of thing. I assume it’s specifically because of the SLABS that the FDCPA works like a charm. If I’m contacted by a debt collector I immediately request verification of the debt persuant to the FDCPA. They have to verify the debt before taking any further collection actions. Without fail they send me a copy of the Promissory Note I allegedly signed but the copy they send has my name typed on the signature line. I assume this is because the original note has already been sold in a SLABS. Anyway, a note with a name typed on the signature line is at best NOT proof of a debt and at worst it’s a forgery and mail fraud. I point this out and the debt collector instantly vanishes. It worked four times for me and now it’s been long enough that the student debt is off my credit report. Hey, I’m happy to pay my debts but if they already sold the debt in a SLABS then F them. I’ll wait until the true holder of the note shows up with a valid claim. 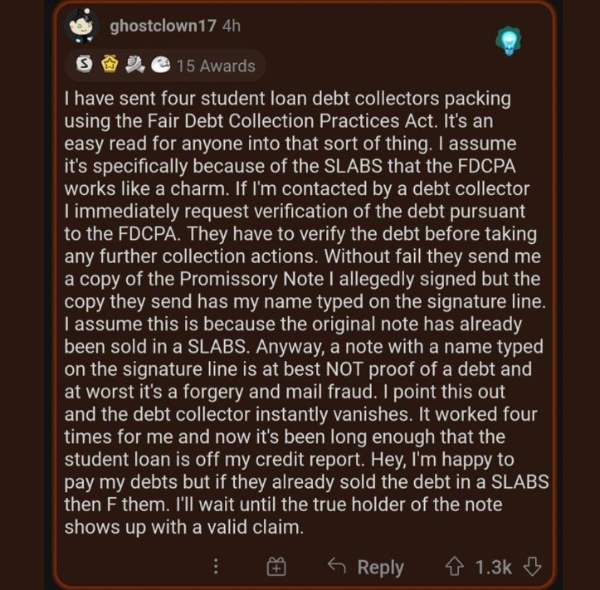 An iteration of the graphic, posted on the progressive Facebook page “The Other 98%,” has been shared several thousand times since being published on January 22 2022.

According to legal experts we talked to, however, this claim is inaccurate — except under very specific circumstances. Attorney Jeremy Golden told us that possession of a promissory note could be invoked in a trial setting.

“If a debt collector were to file a case in court with only a copy of the promissory note it may be considered sufficient evidence. Whether the original promissory note is required would be in the judge’s discretion,” said Golden, whose firm works with clients facing issues with their loans.

“You could make the argument it is not sufficient but it would depend on how the judge interpreted the law. At the least there is no bright-line rule that the original, as opposed to a copy, is required.”

Outside of a courtroom, however, the meme’s tactic could be applied to private student loans and not federal student loans. For borrowers in California, however, it is already required under state law. According to AB424, private student loan debt collectors may not attempt to collect on debtors via “written statement” unless they can prove that they have certain information. Section 1788.202 of the law includes this requirement:

Borrowers outside of California, however, would be better served speaking to an an attorney.

“It’s going to depend on your specific situation,” said another attorney we spoke to, who works with clients living on no or low income, on condition of anonymity. They told us:

Verification and validation, which is what that image is referring to — asking them to verify and validate the debt — is a useful tool because a lot of times, the place that bought the debt doesn’t have any actual proof of it. All they have is whatever the person sold them, which is a balance sheet. They won’t have a signed copy of the signed letter or the promissory note. That happens a lot for consumer debt and for private loans. In those situations you can often go back to the creditor and say ‘This is not proof, I am contesting this debt. Remove it from my credit report.’ A lot of times what will happen when you do that in the context of debt — whether it’s private loans or consumer debt — is that the creditor [says] “This isn’t worth the effort I’m putting into it. I’m going to sell the debt again.”

I want to be absolutely clear that this is in no way advice to not pay the amount of debt that you owe, because some places do have [methods of] recourse and they will use them. This is just to say that there are situations where maybe they don’t and maybe this is a useful time to talk to someone who deals with debt collection and defense against debt collection.

We also contacted several groups who advocate on behalf of student loan borrowers; at least two would not comment, but they did concur that raising the issue of the promissory note would only apply to privately-held loans, and not federal loans. Both the Federal Trade Commission (FTC) and the U.S. Department of Education offer guidance on how to deal with outstanding student loan debt.