Around June 30 2020, posts labeled “1979 horoscope i am fucking begging you to read this” began circulating on Facebook:

1979 horoscope i am fucking begging you to read this pic.twitter.com/ta2k3FbQvu

In two of the three iterations above, the “fucking begging you to read this” verbiage appeared; all three identified the battered document as a “1979 horoscope.” Bits and pieces of the document’s content appeared on undated web pages, but what appeared to be a transcription (also undated) was published to a personal website:

YOUR HOROSCOPE
AQUARIUS (Jan 20 – Feb. 18) You have an inventive mind and are inclined to be progressive. You lie a great deal. On the other hand you are inclined to be careless and impractical, causing you to make the same mistakes over and over again. People think you are stupid.

PISCES (Feb. 19 – Mar 20) You have a vivid imagination and often think you are being followed by the CIA or FBI. You have minor influence over your associates and people resent you for flaunting your power. You lack confidence and are generally a coward. Pisces people do terrible things to small animals.

ARIES (Mar 21 – Apr 19) You are the pioneer type and hold most people in contempt. You are quick tempered, impatient, and scornful of advice. You are not very nice.

TAURUS (Apr 20 – May 20) You are practical and persistent. You have a dogged determination and work like hell. Most people think you are a stubborn and bullheaded. Taurus people have B.O. and fart a lot.

GEMINI (May 21 – June 20) You are a quick and intelligent thinker. People like you because you are bisexual. However, you are inclined to expect too much for too little. This means you are cheap. Gemini people are known for committing incest.

CANCER (June 21 – July 22) You are sympathetic and understanding to other peoples problems. They think you are a sucker. You are always putting things off. That is why you will never make anything of yourself. Most welfare recipients are Cancer people.

LEO (July 23 – Aug 22) You consider yourself a born leader. Others think you are pushy. Most Leo people are bullies. You are vain and dislike honest criticism. Your arrogance is disgusting. Leo people are thieves.

VIRGO (Aug 23 – Sept 22) You are the logical type and hate disorder. This nit-picking is sickening to your friends. You are cold and unemotional and sometimes fall asleep while making love. Virgos make good bus drivers.

LIBRA (Sept 23 – Oct 22) You are the artistic type and have a difficult time with reality. If you are a man, you are more than likely queer. Chances for employment and monetary gains are excellent. Most Libra women are good prostitutes. All Libras have venereal disease.

SCORPIO (Oct 23 – Nov 21) You are shrewd in business and cannot be trusted. You will achieve the pinnacle of success because of your total lack of ethics. Most Scorpio people are murdered.

SAGITTARIUS (Nov 22 – Dec 21) You are optimistic and enthusiastic. You have a reckless tendency to rely on luck since you lack talent. The majority of Sagittarians are drunks or dope fiends. People laugh at you a great deal.

CAPRICORN (Dec 22 – Jan 19) You are conservative and afraid of taking risks. You don’t do much of anything and are lazy. There has never been a Capricorn of any importance. Capricorns should avoid standing still too long as a dog might think you are a tree and piss on you.

Nothing on the widely-circulating versions in June and July 2020 specifically indicated that the typed sheet was from 1979 or from any other year. The version shared to the website linked above was old, and it was possible the humorous horoscope circulated and was printed for posterity in the very early days of the internet.

Although we were unable to locate a specific origin for the purported 1979 horoscope, we did find it in the book The Best American Humor 1994, a description for which suggested the text was likely written by an unnamed humorist in 1994 — not 1979:

This debut collection of The Best American Humor celebrates the funniest short stories, essays, articles, and excerpts of the past year. The more than 40 entries in this edition feature some of the most well-known wits and humorists, including Garry Trudeau, Russell Baker, Paul Rudnick, Douglas Coupland, Garrison Keillor, Conan O’Brien, Philip Roth, T. Coraghessan Boyle, and John Updike among others. Edited by Moshe Waldoks, who co-edited the bestselling The Big Book of Jewish Humor and The Big Book of New American Humor, this volume — the only “best of the year” humor anthology — is a hilarious, cynical, witty, sarcastic, and laugh-out-loud look at the funny side of existence and survival. The Best American Humor 1994 is sure to delight all lovers of fun and laughter. 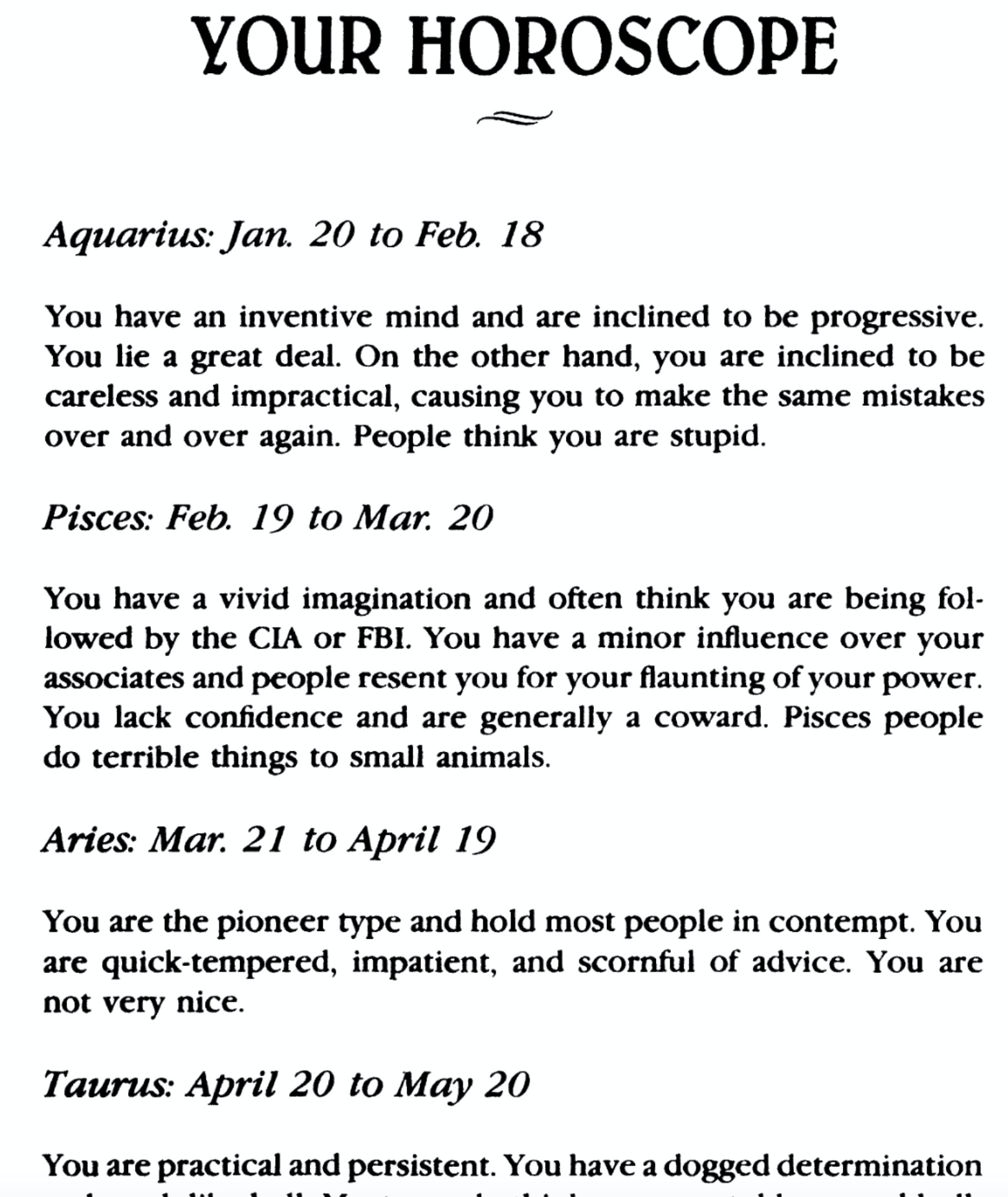 That was not the earliest source we found for the text, though. It also appeared in Mother Jones Magazine in December 1977, not 1979. The text said that it was “submitted by Ann Gold,” and that it was “found by a janitor friend at the Suicide Prevention Center” in San Francisco: 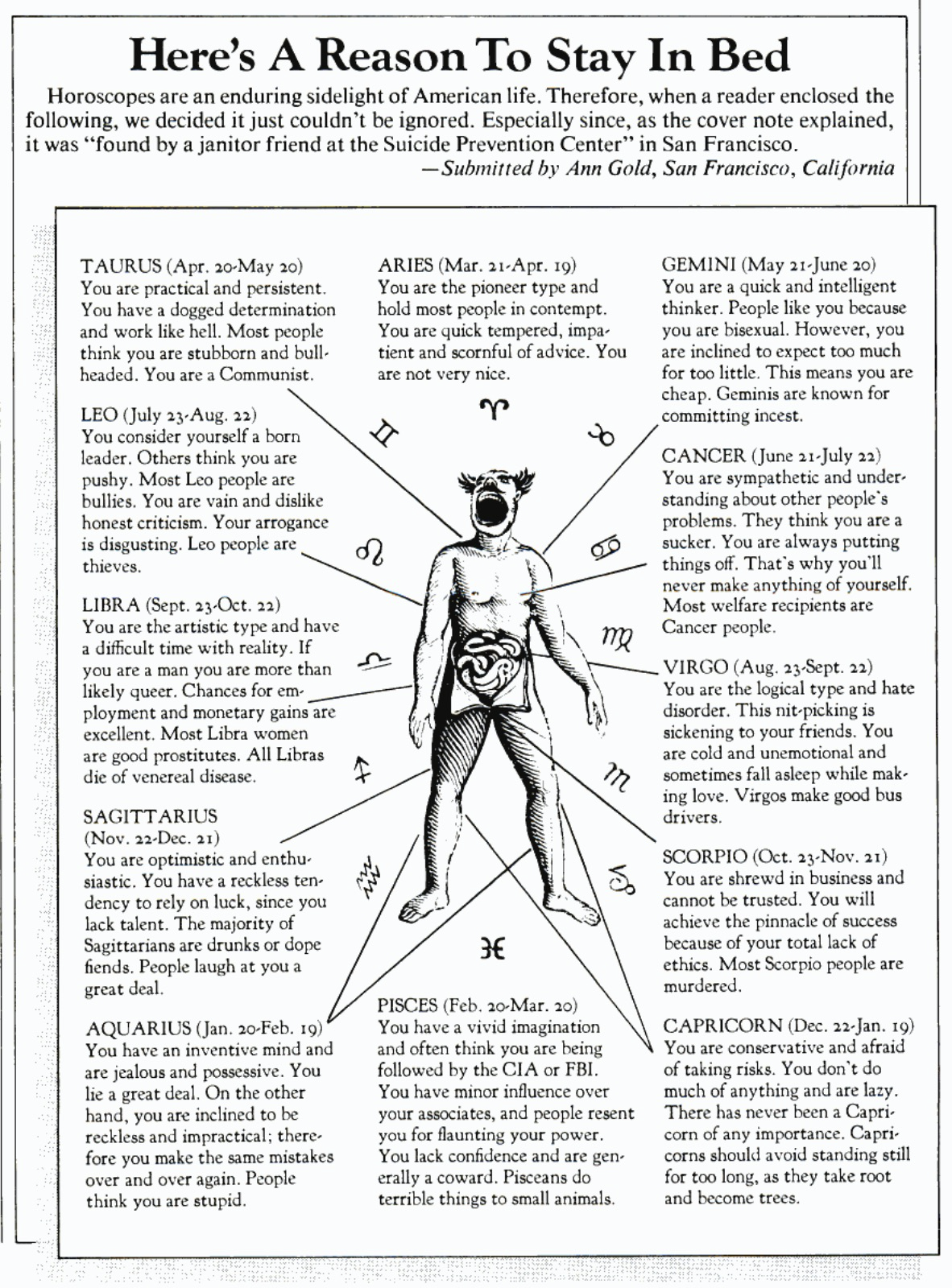 As such, the “1979 horoscope” appeared to predate 1979 by at least two years. It was published in a magazine in 1979, submitted by someone who said they found it in a locker. The actual author and source of the humorous horoscope was not known.