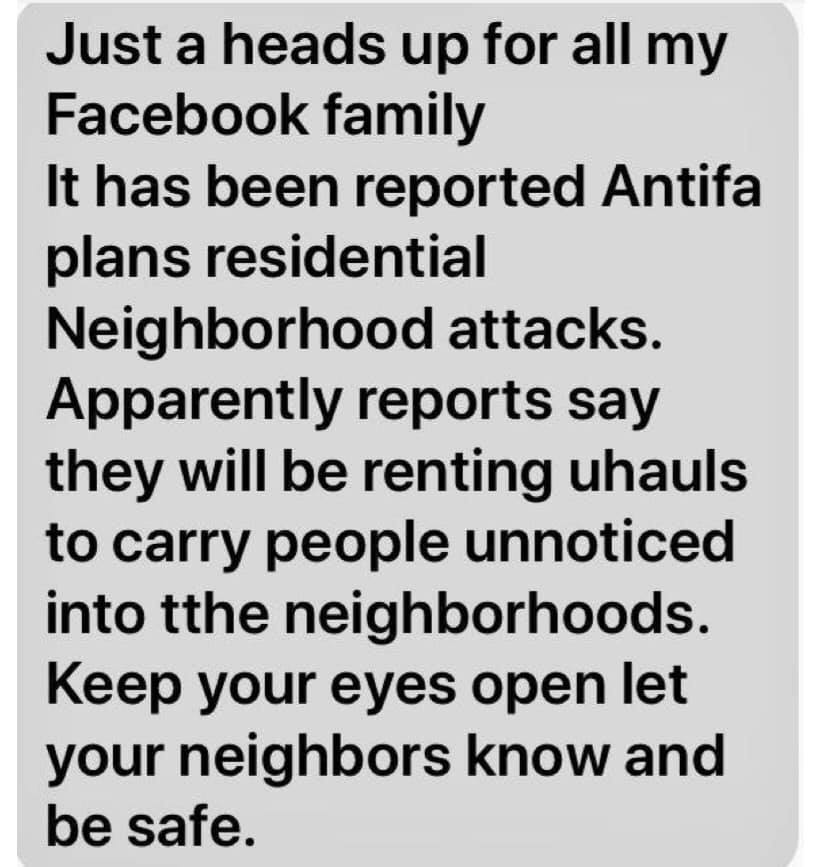 The Rumor and Earlier Iterations

In the above screenshot, black text against a gray background read:

Just a heads up for all my Facebook family It has been reported Antifa plans residential Neighborhood attacks. Apparently reports say they will be renting uhauls to carry people unnoticed into tthe neighborhoods. Keep your eyes open let your neighbors know and be safe.

A commenter on the post asked for a source:

Just curious as to where this info came from? Reports? From who?

I’m sure it didn’t come from CNN or any other mainstream media news source.

here we go again. It was sent to me. I am not revealing my personal iMessages and sources of messages I get via Facebook to you or anyone else.

As observed by the commenter, the information was suspiciously without a source. Its content was also structured in passive voice, asserting “it has been reported” (but not by whom) and adding the more nebulous “apparently reports [said.]”

The claim appeared to be yet another variation on a previously viral (and completely false) claim that antifa protesters were being “bused” into Ada, Oklahoma:

Were Four Busloads of Protesters (or ‘Antifa’) in Ada, Oklahoma Met by ‘600 Armed Americans,’ — and the News Won’t Report It?

Kowalczyk maintained the antifa U-Haul rumor would not be reported by “mainstream news” sources, an element in common with the above “busloads of protesters” rumor. That particular claim was embedded in both rumors, providing an immediate suggestion that an absence of verification or credible source was due not to it being a falsehood, but some sort of media conspiracy to suppress brewing “attacks.”

As commenters observed, the rumor had another innate risk — U-Haul trucks are generally used by individuals or families during a residential move.

On top of that, anyone arriving in a U-Haul truck to a new neighborhood was likely to, at that point, be unknown to their new neighbors. By suggesting that strangers in U-Hauls were “planning attacks on residential neighborhoods,” the rumor posed a risk to any innocent people who just happened to be moving at the time it spread.

A longer post which mentioned the “antifa U-Haul” rumor demonstrated how anyone who was unlucky enough to be driving a U-Haul in late June and early July 2020 was at risk due to the rumor, and it mentioned a concurrent false rumor about anti-fascist protesters, Gettysburg, and July 4th 2020:

ANTIFA PLAN:  30,000 members per state…many trained by radical Islam they plan on killing as many Trump supporters and whites as possible!!

Side note: In VA, Jonesey adding a confirmation to this post. [On June 28 2020] at his local firework stand that has been at the same spot for years…there was a semi truck delivery, at which point Uhaul trucks from all over where loading up.

It was clear from comments on the post that the rumor was causing significant fear, but aside from “attacks,” the post didn’t provide any clear objective. It merely stated that “antifa” rented U-Hauls en masse, and left sharers to fill in the details with their imaginations.

Judging by the rumor’s traction, the strategy was highly effective.

A First Wave of the Same Rumor

Twitter nuisance and Pizzagate pusher Jack Posobiec made a point of mentioning vague and unsourced “intelligence” received by police in New York and Washington, DC about the use of U-Hauls on June 2 2020:

It’s Going Down tweeted about the rumors on the same day, citing a Fox News article with dubious information:

Neo-Nazi groups, already shut down by Twitter, promoted on social media the lie that "ANTIFA" was going to come into suburban "white hoods" to riot and attack people. Now this lie is being promoted at #FoxNews. Egregious example of misinformation and manipulation. pic.twitter.com/mrBXhyeb37

Agitators behind the rioting that has paralyzed the country over the past week want to move into more suburban areas, a government intelligence source has told Fox News.

Much of the worry stems from the notion that many in well-armed, suburban, and rural neighborhoods won’t hesitate to exercise their Second Amendment rights and elevated anxieties could lead to heavy confrontation.

“Antifa knows this,” said the source, who spoke on the condition of anonymity. “Local and state authorities have to get a grip on this because if it moves to the suburbs, more people will die.”

Subsequently, Fox News quoted yet another anonymous source in an effort to substantiate the rumors:

An NYPD source, who was not authorized to speak on the record, concurred that fears were escalating in suburban pockets of New York state following a rash of rumors pertaining to looting starting there.

“People in other places like Suffolk County are worrying, preparing for the worst,” said the source. “There is just a lot of confusion and fear.”

Confusion and fear spreading doubtlessly in part due to sourceless Fox News claims that “antifa” planned to attack and raid “well-armed” neighborhoods.

As of July 1 2020, none of the claims in that article had come to pass — although they clearly continued spreading on Facebook, fueled by imagination, anxiety, and the usual disinformation purveyors.

U-Haul trucks were not mentioned, but the core of the rumor was nearly identical:

A Twitter account claiming to belong to a national “antifa” organization and pushing violent rhetoric related to ongoing protests has been linked to the white nationalist group Identity Evropa, according to a Twitter spokesperson.

As protests were taking place in multiple states across the U.S. [on May 31 2020], the newly created account, @ANTIFA_US, tweeted, “Tonight’s the night, Comrades,” with a brown raised fist emoji and “Tonight we say ‘F— The City’ and we move into the residential areas… the white hoods…. and we take what’s ours …”

This isn’t the first time Twitter has taken action against fake accounts engaged in hateful conduct linked to Identity Evropa, according to the spokesperson.

In other words, the rumor was started by white supremacists and accelerationists in an effort to fuel tensions and foment violence.

Like a game of telephone, a rumor that “antifa U-Hauls” were moving into “residential neighborhoods” for unspecified “attacks” appeared to stem directly from a fake anti-fascist account created by the virulent white supremacist group Identity Evropa. Two days later, Twitter nuisance Jack Posobiec and Fox News spread iterations of the claim; predictably, no such “invasion” came to pass. A similar and likely directly related rumor circulated about “antifa buses” in Ada, Oklahoma, and it too was false. In particular, the “antifa U-Haul” rumor posed a risk to customers of U-Haul, who were at risk specifically if they were moving into a new neighborhood where the rumor had taken root.