In 2005, then-Senator Barack Obama said: "... we simply cannot allow people to pour into the U.S. undetected, undocumented and unchecked. Americans are right to demand better border security and better enforcement of the immigration laws." 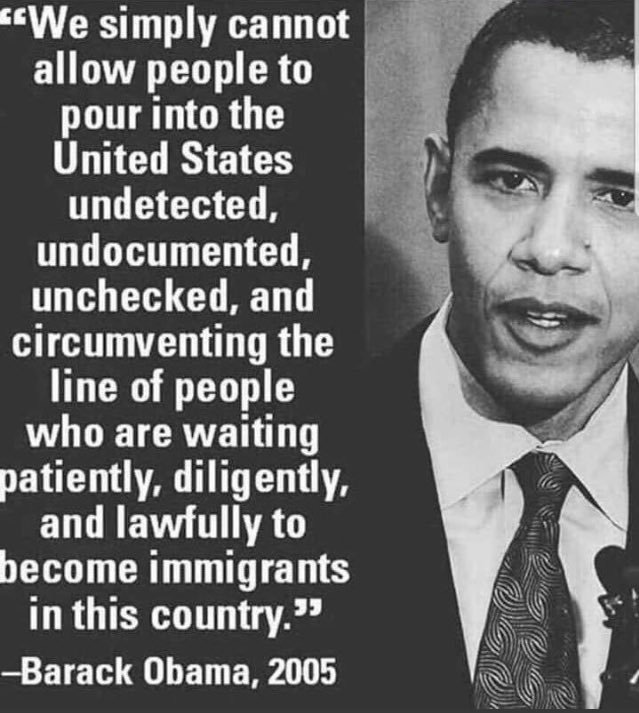 It featured a photograph of Obama on the right, and on the left it read:

“We simply cannot allow people to pour into the United States undetected, undocumented, unchecked, and circumventing the line of people who are waiting patiently, diligently, and lawfully to become immigrants in this country.”

The quote is authentic and available in clip form in C-SPAN’s archives, and as a separate video featuring only that portion on YouTube. Obama begins speaking at roughly the 5:20 mark. Almost exactly two minutes into Obama’s portion of the segment at the 7:20 mark, he recites the line seen in the meme.

A December 2005 Wall Street Journal editorial credited to Barack Obama and Mel Martinez included much of the press conference commentary verbatim. In its broader context, the commentary by Obama appears alongside additional remarks about immigration reform:

When Congress last addressed this issue comprehensively in 1986, there were approximately four million illegal immigrants living here. [In December 2005], it is estimated there are more than 11 million. We are a generous and welcoming people, but those who enter our country illegally, and those who employ them, disrespect the rule of law. And because we live in an age where terrorists are challenging our borders, we simply cannot allow people to pour into the U.S. undetected, undocumented and unchecked. Americans are right to demand better border security and better enforcement of the immigration laws.

To begin with, the agencies charged with border security require new technology, new facilities and more people to stop, process and deport illegal immigrants. But while security might start at our borders, it doesn’t end there. Millions of illegal immigrants live and work here without our knowing their identity or background. That’s why we need a guest-worker program to replace the flood of illegals with a regulated stream of legals who enter the U.S. after checks and with access to labor rights. This would enhance our security, raise wages and improve working conditions for all Americans.

American employers also need to take responsibility. Too often illegal immigrants are lured here with the promise of a job, only to receive unconscionably low wages. In the interest of cheap labor, unscrupulous employers look the other way when employees provide fraudulent U.S. citizenship documents. These acts hurt both American workers and immigrants whose sole aim is to work hard and get ahead. That’s why we need a simple, foolproof and mandatory mechanism for all employers to check the legal status of new hires.

Another user-generated C-SPAN clip from 2017 of Obama’s comments on undocumented immigrants at the December 2005 press conference is available here. However, the quote is authentic and correctly attributed, verifiable through video footage and a Wall Street Journal editorial co-authored by Mel Martinez featuring the same wording.