All throughout 2014 and beyond, a chain email and viral post bounced around inboxes and social media about a “new” set of tax increases set to take effect on January 1, 2015:

These taxes were all passed only with democrat votes, no republicans voted for these taxes.

These taxes were all passed under the Affordable Care Act, aka Obamacare.

If you think that it is important that everyone in the U.S. should know this, pass it  on. If not, then delete it.

These same false and misleading claims enjoyed a resurgence in 2016 just before the United States’ presidential election and again in 2018, just ahead of the midterms: 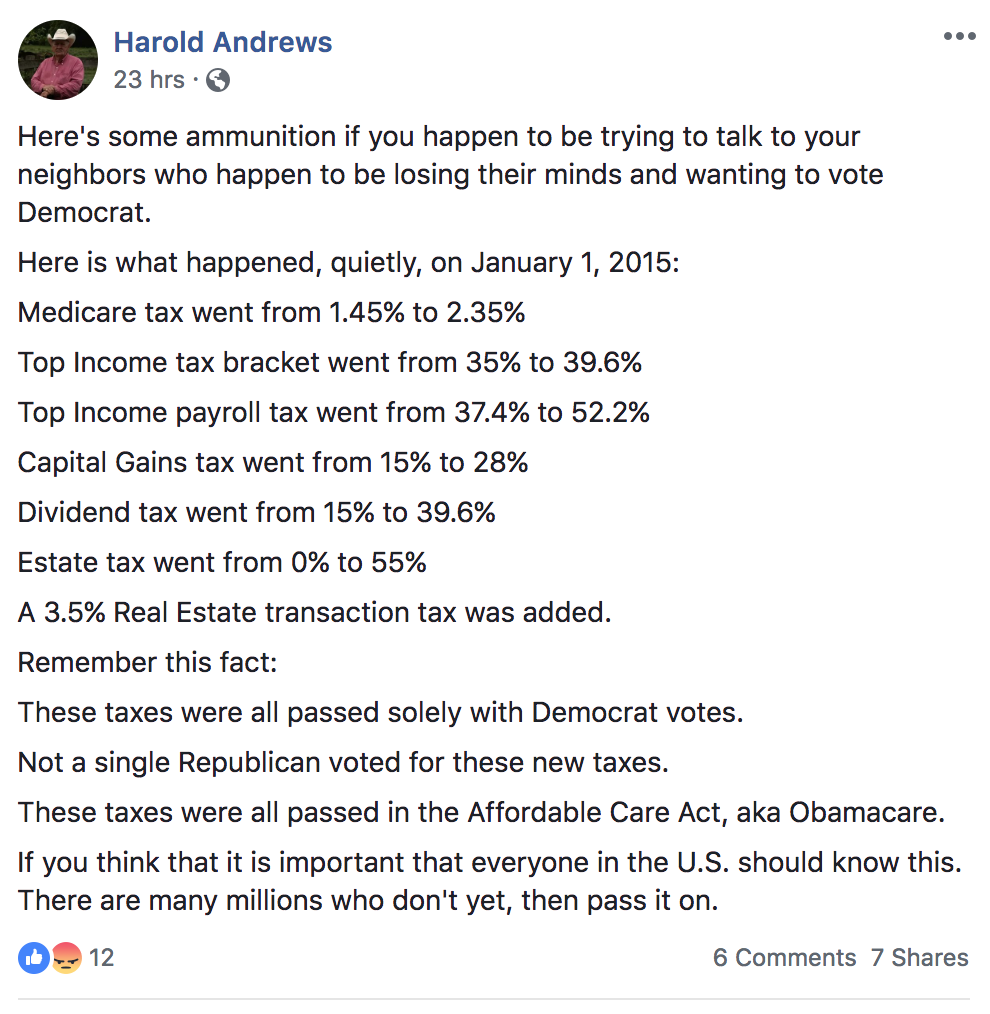 Many of the tax rates listed in this viral message were set under the bipartisan American Taxpayer Relief Act of 2012, or ATRA — not the Affordable Care Act (also called the ACA or Obamacare.) ATRA was passed after the 2012 presidential election to prevent a federal government shutdown, and it took effect on January 1, 2013,  not at the beginning of 2014 or 2015 as repeatedly claimed.

A brief look at the rest of the claims shows that although the numbers in each iteration are more or less unchanged, they remain as untrue as ever.

The wage thresholds of $200,000 and $250,000 are not inflation adjusted. As such, this law will apply to more and more taxpayers over the years.

As of 2018, when these claims came around yet again before the midterms, the tax bracket for top earners was 37 percent.

Fiction. The combined income and payroll tax rate went from 37.9 percent to 42.5 (not 52.2) percent on January 1, 2013 under the healthcare law.  However, that figure excludes state taxes that are factored in separately and which have nothing to do with the ACA, meaning that without a detailed state-by-state breakdown, no number would be accurate.

The eRumor’s claim is misleading because it excludes state capital gains taxes from the 15 percent figure. It also gets the timing and the amount of the increase wrong.

Fiction. The bipartisan ATRA capped the marginal tax rate at 20 percent on dividends income. A Medicare tax levied under the ACA added another 3.8 percent for high-income individuals. That means the rate will be no more than 23.8 percent.

Finally, the missive contends that “not a single Republican” voted for these imaginary tax hikes. Assuming that it was written in good faith about the American Taxpayer Relief Act of 2012, that is demonstrably untrue; without the good faith assumption, it can be regarded not as misinformation, but disinformation — in other words, a lie.