An unspecified "4th precinct" shared a Facebook post displaying a "homeless quilt" of cardboard signs seized by a "panhandler patrol."

On January 5 2021, an Imgur user shared a screenshot of a Facebook post attributed to an unspecified “4th precinct,” alongside an image of two uniformed police officers and a “homeless quilt” of signs confiscated by a “panhandler patrol” (complete with a “thin blue line” flag on the wall behind them): 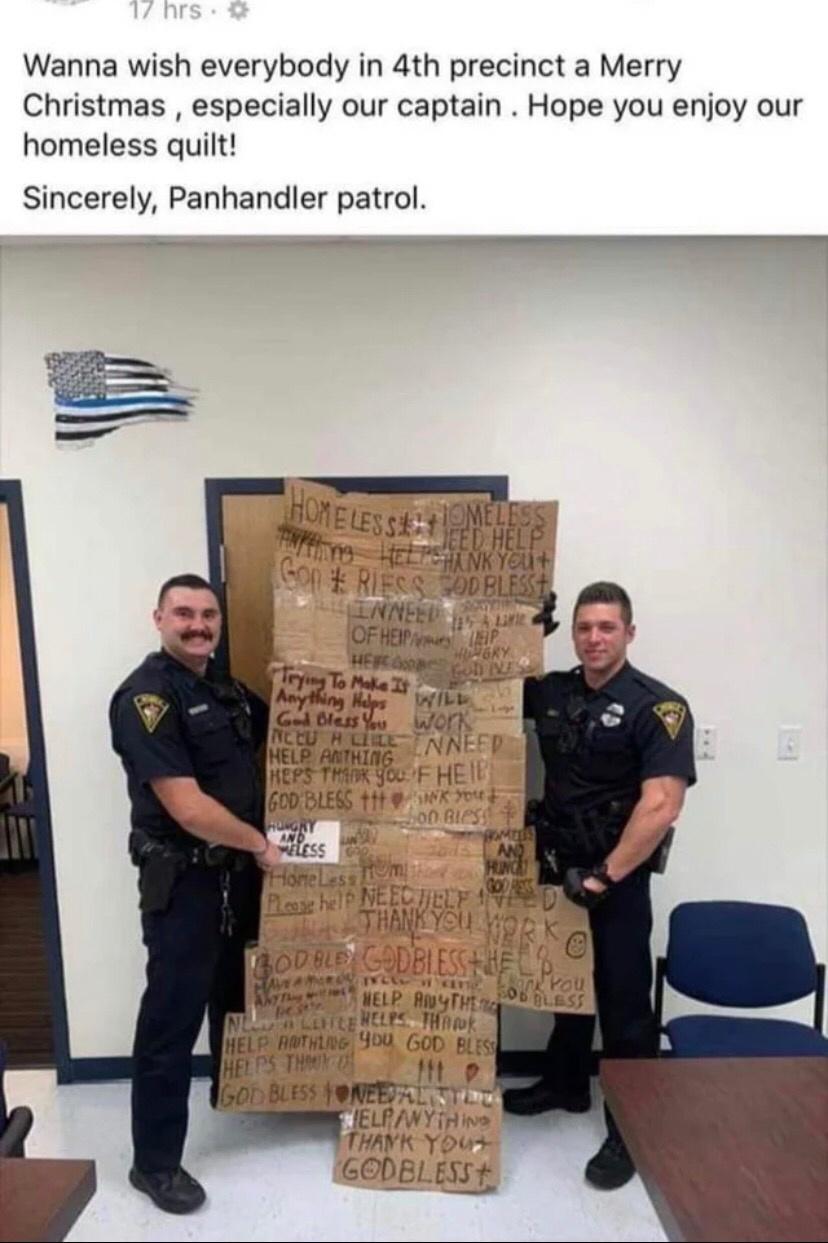 User DrVenture420 titled the post “Fuck! Can’t even think of a title,” while the text of the screenshot read:

Wanna wish everybody in the 4th precinct a Merry Christmas , especially our captain . Hope you enjoy our homeless quilt!

Portions of the signs were covered, but some visible wording read “homeless,” “need a little help,” “trying to make it,” “anything helps,” “need work need help,” and “need work need help.” The top of the post was cut off (possibly to impede identification of the 4th precinct referenced), but the screenshot was evidently taken about a day and a half after the original post was shared to Facebook.

No immediately visible information provided clues about the date the photograph was taken or its location. Both officers lacked masks, suggesting that the image might have been taken before 2020, or that it was possibly taken before masks were in widespread use.

Imgur commenters responded to the image:

“So their response to people in need is to steal their signs? Better than shooting them I guess.”

“This is why we can’t have an empathic society. They essential criminalized being poor. Mocking the poor and having a ‘panhandling dept.'”

“Woah, two bad apples in the same department??? What are the odds?”

“This is indecent and disgraceful. These men aren’t fit to serve in that uniform.”

“Americans are fucked up”

We located a separate version of the screenshot with less cropping, shared on December 30 2019 — making the image at least a year old. Its reemergence in early January 2021 suggested the possibility the image appeared in “On This Day” or “Memories” posts from when it first went viral.

In that tweet, @spookperson said “americans are insanely evil.” The same 17 hours had passed, suggesting the 2021 version on Imgur was a cropped version of the one in the tweet. Moreover, the post appeared to have been shared by an individual (Preston, surname redacted), who tagged three other Facebook users in the original post:

On December 30 2019, within three hours of the tweet’s appearance, BuzzFeed published an article identifying the precinct’s location in Mobile, Alabama. A spokesperson for the department said the photograph was “definitely immature and insensitive and in [no] way indicative of the department as a whole,” and “not something that is approved of and practiced.”

In a statement on Monday [December 30 2019], Mobile Police Department Chief Lawrence Battiste apologized for the picture, calling it an “insensitive gesture.”

“As a police department entrusted with serving and protecting our community, we offer our sincerest apology for the insensitive gesture of a Facebook post by two of our officers where they are holding up a homeless ‘quilt,’ made of panhandling signs,” the statement reads. “Although we do not condone panhandling and must enforce the city ordinances that limit panhandling, it is never our intent or desire as a police department to make light of those who find themselves in a homeless state. Rather, our position has always been to partner with our community service providers to help us help those faced with homelessness with hope to improve their quality of life.”

A spokesperson for the department told BuzzFeed News an administrative investigation has been launched over the officers’ actions, which would determine if punitive action, or training, would be recommended for the post.

A January 5 2021 Imgur post about the “homeless quilt” and “panhandler patrol” prompted a revival of distaste for the original December 2019 post, but lacked both contextual information about the image and chronological detail. The photograph was acknowledged as real by Battiste, who said it was “a Facebook post by two of our officers” from December 2019.