On March 16 2019, the Facebook page “Blossom” shared a video entitled “8 mind-blowing transformations you can do at home!” to its page and to Facebook Watch.

The video raked in a massive 58 million views in just a few days, and its claims were big ones. In a series of DIY/hack montages similar to perplexing content produced by Troom Troom, Blossom purportedly shows viewers how to: 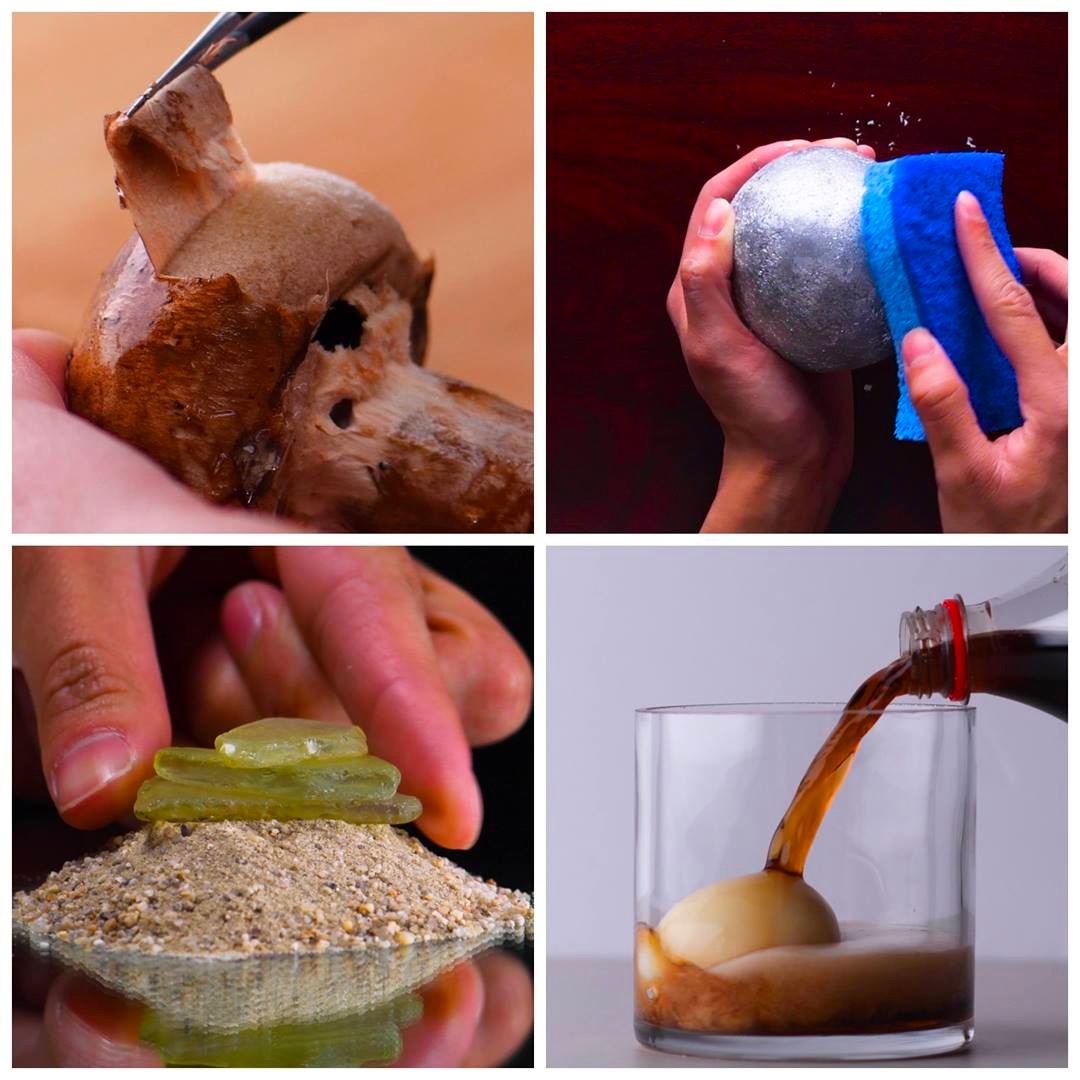 For its first “hack” involving “pencil lead diamonds,” on first watch you can see the gem purportedly produced is far wider than the source pencil “lead” seen in the video. Those who attempted to do an initial research of their own might have been initially swayed by a cadre of results bearing headlines indicating that diamonds can indeed be fabricated in a microwave:  “How to make diamonds: under pressure or using microwaves,” “Now you can make diamonds in a microwave,” and a Reddit r/futurology thread, “Scientists have figured out a way to make diamonds in a microwave.” A commenter on the latter, shared on April 10 2018, notes:

Although it should be mentioned you can’t do this with an average microwave. It has to be a very powerful and specialized lab one.

An page published on a university’s website adds that the process of using a “microwave” to make diamonds “usually [takes] a few weeks” (not seconds.)

More of interest, and more to the point, is an undated Instructables page called: “How to Prank the Instructables Community.” In it, the user explains an April Fools’ Day prank in which they fabricate a method to create diamonds in a microwave. The person who posted it adds:

Everything in my photos is 100% real. It’s my explanations of what’s in the photos that’s fake. I did use oil on the thread; but the thread wasn’t 100% cotton. I did nuke the graphite in my microwave; but only for about 10 seconds (and it ARCED LIKE CRAZY). There was a lump of carbon left over; but it was overcooked angel hair pasta, not diamond. I really did make the pendant in the last step; but it was just a crumb of burnt pizza crust encased in epoxy.

In other words, you cannot make diamonds from pencil lead using your home microwave. Related articles about laboratories making diamonds using forced heat might suggest otherwise if you only see the headlines, but on closer inspection they describe a far more involved process using industrial equipment. Likewise, “vegan leather” is sometimes made from mushrooms and sometimes made at home, but the former process is far more involved and the latter involves different materials.

Its second claim involved microwaving a rock, which is inadvisable due to the potential for metal deposits to ignite. But as one YouTube channel demonstrates, doing so will yield you one very hot and possibly broken rock — but you won’t get any crystals out of the deal. There are children’s science projects around the concept of creating “crystals” with boiled salt water. However, that process is not instantaneous.

The clip also claimed that using a kitchen blowtorch for foods such as crème brûlée could adequately torch sand to make a thick slab of colorful glass. Again, the assertion was based on a grain of truth, but using equipment intended to caramelize sugar while leaving a delicate custard intact ain’t it, chief:

Sand, when hot enough to make glass, must be heated in excess of 3,200 degrees Fahrenheit … Making glass takes nearly an entire day. Glass makers add chemicals to baby silica sand from Ottawa, Ill. The mixture is cooked in a furnace called a bee hive. The blend is stirred during the last four hours until completed, about a 20-hour process.

Once again, there is some truth to the tinfoil into a decorative metal orb montage. Apparently, that project was some sort of online trend, leading to an April 2018 video in which the channel’s creator explains in a video description:

The latest crazy online trend is polishing aluminum foil balls until they shine. I didn’t even know you could do that to aluminum foil, so Challenge accepted! I am going to do the Japanese polished foil ball just to see what it takes. I have tried to do an AMAZING MIRROR POLISH on on different objects before, but I never knew that you can polish tinfoil. This ball became my obsession AND my masterpiece.

Although the “Blossom” video indicates that the process calls for about ten sheets of tinfoil, some oil, and sandpaper, this video shows a far more arduous process. It involves a decent amount of tinfoil, several kinds of sandpaper, a hammer, extensive hammering, a belt sander, something that looks like paint or pigment, and what appears to be hours of work for said ball.

Following that, no credible source (or any source we could locate) suggested that the involved and lengthy creation of century eggs could be “hacked” with Coca-Cola or any other substance:

A Chinese delicacy, century eggs are duck eggs that have been preserved in a saline solution of ash, lime, salt, clay and rice for weeks or even months. When preservation is complete, the shell of the egg will become speckled, giving it an aged appearance. The yolk will become dark green, creamy and cheese-like, and the whites will turn into a dark-colored jelly.

By all accounts, century eggs take at least 45 days to make:

There are three major methods for making century eggs, according to the FDA, including coating, soaking, and a mix of the above. In the first method, the manufacturer applies quick lime, plant ash, and other alkaline substances onto the shell. In the second method, the manufacturer soaks the egg in solution containing sodium hydroxide. The other method is a mix the two. The time required for soaking is usually 45 days in summer and 60 days in winter.

Soaking an egg in vinegar for at least 12 to 24 hours can create a “naked egg,” which is a common science project for children. Out of all the suggested “transformations,” that was arguably the least useful.

All in all, the “mind-blowing transformations you can do at home” tips were useless, dangerous, or both. At best they were a waste of time and materials, but at worst they could entice children into microwaving items with metal deposits. The video’s demonstrations were fabricated or edited deceptively (possibly as an early April Fool’s Day prank), and the suggested projects would not work as claimed, if at all.