In March 2019, a Facebook user shared a meme (archived here) which claimed that the “OK sign” hand gesture is both favored by white supremacists, and that it is also American Sign Language for the word “asshole”: 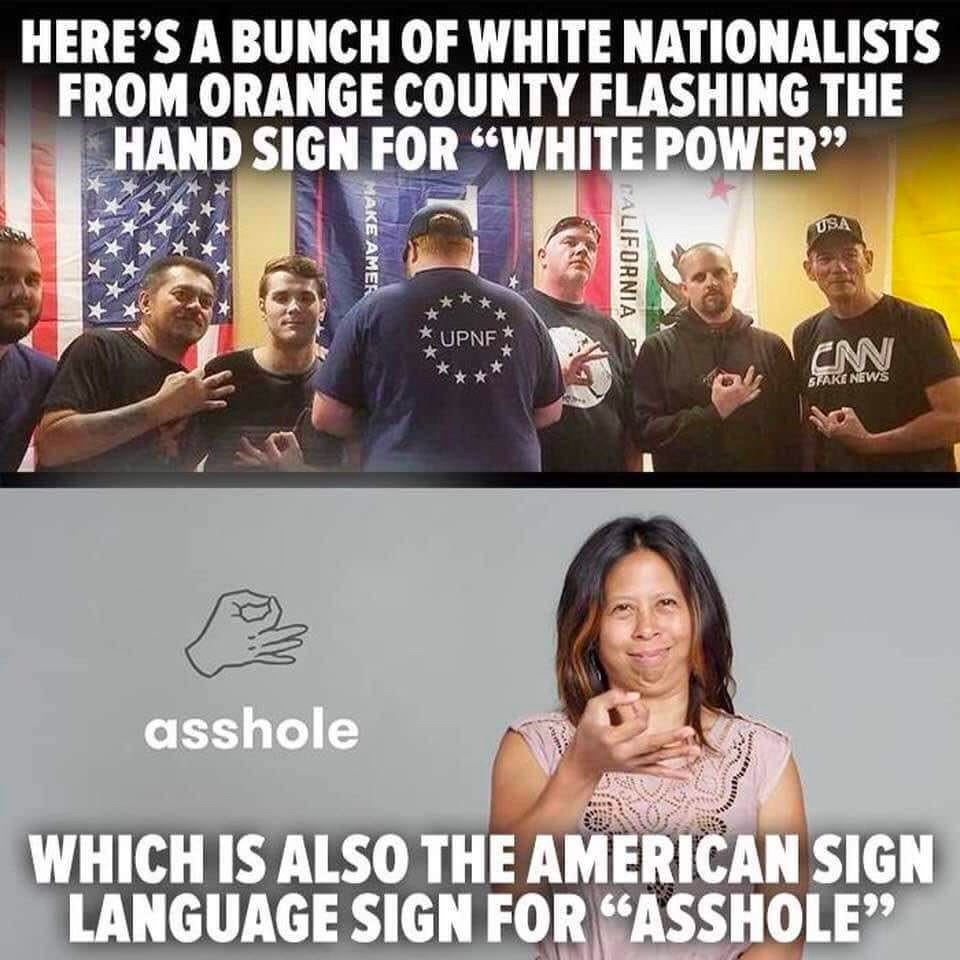 This meme appeared on Facebook on March 16 2019; one day before, news organizations reported that the accused mass shooter who killed fifty people at two mosques in Christchurch, New Zealand used that same gesture during a March 16 2019 court appearance:

The 28-year-old, who is accused of murdering 50 people during a shooting rampage in Christchurch on Friday, appeared unrepentant and smirked inside the courtroom as he gave an upside down “OK” symbol with his right hand.

The hand gesture, often accompanied by a smirk, is associated with white power groups. The middle, ring and pinky fingers is said to represent a ‘W’ (white) and the thumb and forefinger come together to represent a ‘P’ (power).

Although this particular post appeared after the suspected shooter used the gesture, the meme itself was not new at the time. An August 2018 blog post about the same meme (“Meme-Maker Falls For Hoax?”) examined the claim and detailed the nuance behind it:

So which is it? A hoax or real? The top photo IS from a white nationalist group’s Facebook page; I found it myself. There is, however, no indication of what the gesture is supposed to mean. For all we know, they could have actually learned the sign for “asshole” and are using it to mean exactly that.

In May 2017, the ADL traced the “OK sign” link to white supremacists back to a 4chan hoax campaign:

Has the simple thumb-and-forefinger “OK” hand gesture become a common white supremacist hand sign? Not quite, but it has become a popular gesture used by people across several segments of the right and far right — including some actual white supremacists — who generally use it to trigger reactions, or what they would describe as “trolling the libs.”

This is thanks to a 2017 hoax campaign started by members of the notorious website 4chan that has since taken on a life of its own … The “OK” hand gesture originated as one of these hoaxes in February 2017 when an anonymous 4channer announced “Operation O-KKK,” telling other members that “we must flood Twitter and other social media websites … claiming that the OK hand sign is a symbol of white supremacy.” The user even provided a helpful graphic showing how the letters WP (for “white power”) could be traced within an “OK” gesture. The originator and others also suggested useful hashtags to help spread the hoax, such as #PowerHandPrivilege and #NotOkay. “Leftists have dug so deep down into their lunacy,” wrote the poster, “We must force [them] to dig more, until the rest of society ain’t going anywhere near that s***.”

The ADL previously acknowledged, however, that a similar sign has been used by some white-power gangs over the decades:

Popular YouTube channel ContraPoints, whose host explains political and social issues, addressed the issue in a September 2017 video titled “Decrypting the Alt-Right: How to Recognize a [email protected]” At the 10:10 mark, host Natalie Wynn discusses “Secret Symbols” and “innocuous emoji.” Wynn addresses the trolling aspect at approximately 11 minutes in, noting here that the “OK sign” is not inherently racist, but notes how the normative nature of random symbols like the gesture are a jumping-off point for claims that opponents of racism find everything racist — “even the OK sign.” In a subsequent point, Wynn notes that the ambiguity is yet another functional strategy in muddying the waters around discourse about white nationalism.

However, despite the postmodern nature of white supremacist signaling, one thing is certain: the “OK” sign does resemble the American Sign Language translation for the word “asshole,” and that appeared well before and independently of the widespread adoption of any similar hand sign as a white supremacist dog whistle.