Typing #911 in a Facebook comments generates a green line or green bar if you're "not a snitch."

A long-circulating Facebook status meme of indeterminate claims that typing #911 in a comment will generate a green line or green bar, confirming that the user commenting is “not a snitch.”

Variations of the meme (which date back to March 2016) tend to operate as “engagement bait” — or, to be more precise in this case, snitchbait — prompting a higher number of comments than is standard due to curiosity about the claim:

Facebook found a way to track snitches. Post #911 in the comments. If #911 shows up then your a snitch, if a green line shows up your not a snitch.

Facebook has found a way to track snitches. Comment #911 below. If #911 shows up, you’re a snitch. If a green line shows up. You’re not a snitch. At least according to Facebook snitching standards.

Are you a snitch? If not prove it by typing #911 in the comments. If you’ve never snitched, a green line will show up. If you are a snitch #911 will show up.

Almost always, the poster themselves comments first — producing a green line or green bar indicating they are not a snitch. Tthe balance of comments almost entirely show “#911” and not a bar, demonstrating that the majority of commenters are, unfortunately, revealing themselves as snitches.

A curious aspect we observed in the many public versions of the #911 snitch meme on Facebook were that on any given post, regardless of device, commenters tended to produce the same green bar. In some iterations, it was a gradient. Others had a short and wide green bar, and some were longer and a paler green. But there was typically a uniformity in the generated green bar or green line.

Another common trend was the appearance of humorous versions of the green bar, generally stating in true internet form that the commenter was particularly intelligent, good-looking, or well-endowed. And finally, almost always, the majority of commenters simply commented #911. But no bar appeared: 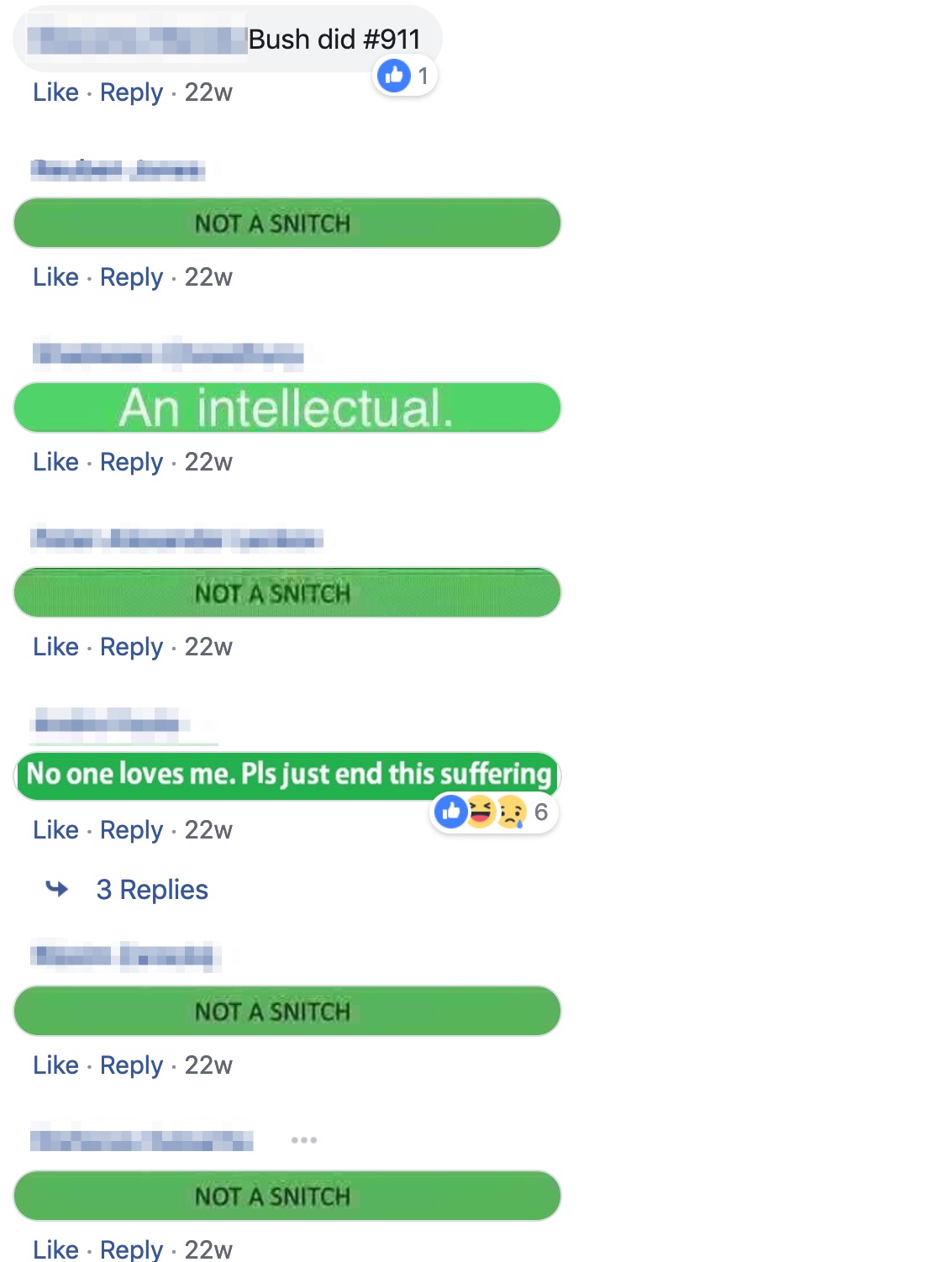 The repetition in the excerpted comments above demonstrates the likelihood of copying and pasting, changing throughout long threads on some iterations. In 2016, ThatsNonsense.com maintained that a similar status update meme involving typing #177 to verify you haven’t been hacked was an inside joke among posters:

In reality this appears to be some kind of ‘in joke’ for those that have figured out that this is actually just a silly hoax. The green bars that many users have posted appear just to be images they have saved and attached to their comments in a bid to fool their more uninformed Facebook brethren.

The same year, Hoax-Slayer.net called the status meme a “silly prank.” Another site described it as a practical joke.

Obviously, the presence of a green bar whether or not the commenter typed #911 does not vindicate covert snitches. After all, that’s precisely what a snitch would do — produce a validation green line to stay under the radar.

We attempted to test the claim by typing #911 on desktop browsers as well as our mobile phones, but none of the attempts produced a green bar.

The likeliest explanation that a green bar appeared in a handful of comments was that the users were copying and pasting the image — sometimes selecting a humorous variant, as is common in meme culture. An outlying possibility for a device quirk allowing the hashtag generation of images in comments was possible, but both unlikely and uncommon. In most cases, typing #911 did not produce a green bar or green line. In any event, typing #911 in Facebook comments did not at any point produce a green bar to prove that you or your friends are not snitches, nor has the social media platform announced any plans to test for potential snitchery.