On January 7, 2019, the Facebook page “Animals & Nature” shared a seemingly wholesome plea on the part of the purported poster’s 100-year-old grandma: 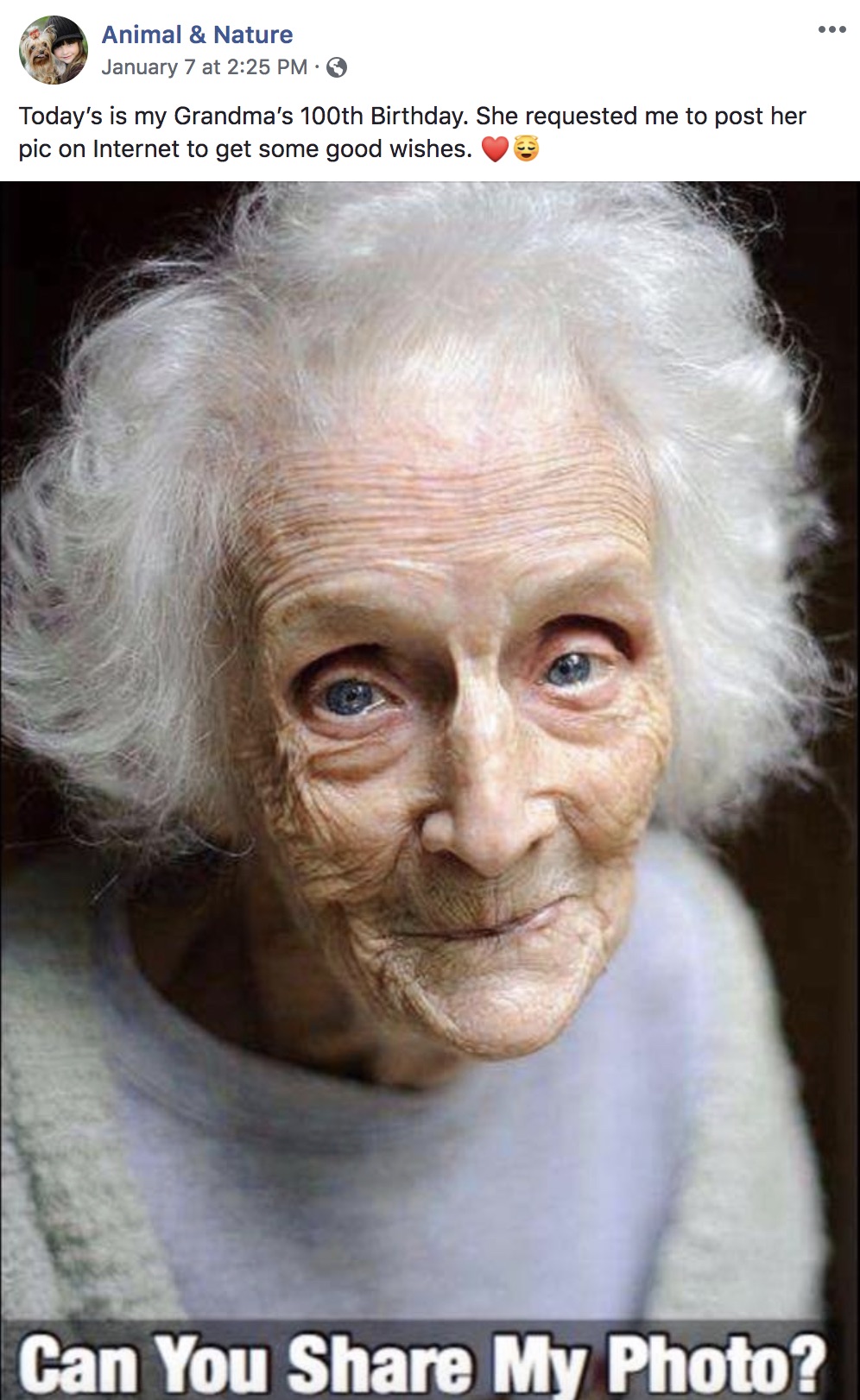 Alongside the purported centenarian’s image, a caption pleaded:

Today’s is my Grandma’s 100th Birthday. She requested me to post her pic on Internet to get some good wishes. [heart emoji, angel emoji]

By January 10, 2019, it seemed a number of those who had come across the post had been moved by the simple request, and nearly 60,000 had shared it. But its premise was phony — the image chosen for “grandma” on her 100th birthday has been ping-ponging around the internet since at least 2012.

We found an earlier version of this photograph in a since-deleted Flickr collection, but the image was likely older. As far as lies go, “this is a picture of my grandma” is pretty low on the chaos scale. So why do pages fabricate claims that are easy to disprove (but ones which people are perhaps unlikely to check)?

One reason is what is sometimes called “like-farming.” Facebook’s algorithms prioritize “engagement,” which means gathering “likes” and “shares” is all-important within that medium.

Like-farmers will gather clicks and likes and responses, which supposedly indicate popularity and engagement, then scrub the original content and replace it with something else, like an ad, to bypass Facebook constraints.

And then there’s clickbait, also known as response-farming. It’s often used by existing, legitimate companies in order to increase their online profiles. Unfortunately, it can also be used by grifter types to direct unsuspecting people to click on their ads, which can lead to malware infestations or force your Facebook account to share updates (or worse) without your knowledge or consent.

Posts like the “grandma” one fell into the category of engagement bait, a practice Facebook maintained that it would downrank in December 2017:

People have told us that they dislike spammy posts on Facebook that goad them into interacting with likes, shares, comments, and other actions. For example, “LIKE this if you’re an Aries!” This tactic, known as “engagement bait,” seeks to take advantage of our News Feed algorithm by boosting engagement in order to get greater reach. So, starting [in December 2017], we will begin demoting individual posts from people and Pages that use engagement bait.

Not long after Facebook announced its purported crackdown on “engagement bait,” The Next Web described the move as “long overdue.” In that piece, TNW provided an example of how unscrupulous pages with bad motives were able to “game” Facebook’s algorithms via the tactic:

Engagement bait is an incredibly effective growth-hacking technique. Perhaps the best-known example of a page using it to great success is Britain First — a once-obscure far-right British political party who quickly came to boast the most followed Facebook page in UK politics, largely thanks to its use of Facebook.

It quickly reached over a million followers thanks to its post, which typically contained populist rhetoric in all-caps, and usually contained some permutation of the words “SHARE IF YOU AGREE.”

In the grand scheme of things, whether the poster’s grandma genuinely wanted her image shared across Facebook was largely immaterial. The post itself was of little consequence in the landscape of misinformation — but even minor instances of posting clickbait or engagement bait were emblematic of the innocuous ways in which Facebook’s algorithms were manipulated and easily exploited with dishonest practices.