In January 2019, the following meme appeared on social media about overdraft fees collected by banks: 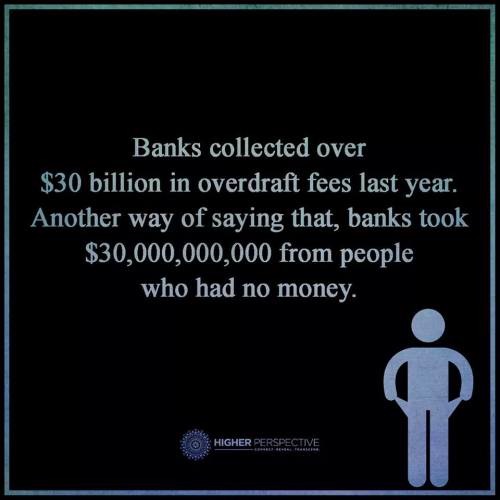 That statement is not exclusive to the image reproduced here; it appeared in variants of the same claim in 2017 and 2018.

Incidentally, the specific version shown here was not first shared in 2019. A marking on the image credits the page “Higher Perspective,” which shared that specific version in November 2015.

We looked into figures for 2014, and located one item published in August 2018 by the Center for Responsible Lending (CRL), a group with a stated mission to curb predatory lending. CRL claimed that banks “collected more than $11.45 billion in overdraft” and insufficient funds-related fees for 2017:

[In August 2018], the Center for Responsible Lending (CRL) released Unfair Market: The State of High-Cost Overdraft Practices in 2017, a report analyzing the overdraft fee revenue generated by banks and the overdraft practices of the 10 largest banks across the United States. According to Federal Deposit Insurance Corporation (FDIC) data, banks with over $1 billion in assets collected more than $11.45 billion in overdraft and non-sufficient funds (NSF) in 2017.

Given its name and mission, we presumed that CRL would err on the side of people rather than banks, and that therefore its numbers would reflect a higher estimate than might be offered by other organizations. Further, CRL released figures for 2017 in August 2018, suggesting that figures for 2018 would not be available through most sources until later in 2019. Nevertheless, their estimates totaled only about a third of the meme’s figures.

In August 2017, CNN reported that the Consumer Financial Protection Bureau cited figures of $11 billion and $15 billion for 2016 (based on raw numbers versus its “best guess” for untracked banking institutions):

In 2016, U.S. consumers paid a total of $15 billion in fees for bouncing checks or overdrafting — which is when a customer tries to make a purchase without enough money in their account to cover the transaction — according to new data released by the Consumer Financial Protection Bureau.

All banks with assets over $1 billion must report how much money it brought in via bounced check and overdraft fees, according to CFPB. And this year the industry rang up at $11.41 billion. That’s up 2.2% from 2015, which was the first year banks began reporting total overdraft and bounced check fees to the CFPB.

Adding in its best guess for what smaller banks and credit unions charged, and CFPB says $15 billion is roughly the grand total.

That report noted that 2015 was the first year that CFPB obtained data from banks on such fees, which perhaps explains why the meme first appeared that year. A December 2016 piece published by a Forbes contributor to their platform combined the purported sum of overdraft fees in a given fiscal year ($11.6 billion in 2015) with a demographic — the least wealthy 20 percent of banking customers, reportedly saddled with 90 percent of those fees:

What started as a courtesy designed to help bank customers cover withdrawals even when they lack sufficient funds has ballooned into a cottage industry for American banks. The largest U.S. banks (those with assets exceeding $1 billion) charged $11.6 billion in overdraft charges and insufficient fund fees in 2015, according to a report released today by the Pew Charitable Trusts. These types of charges on deposit accounts have more than doubled over the past 30 years.

Not surprisingly, the report also finds that those most financially vulnerable bear most of the costs: Just one-fifth of banking customers pay 90% of those fees, Pew found. Most of them earned less than $50,000 a year.

Why are overdraft fees becoming less lucrative? Increased regulation has played a big role. A 2010 Federal Reserve rule has prevented banks from charging fees on purchases or ATM withdrawals that would overdraw the consumer’s account unless that customer specifically opts in to “overdraft protection.” (If a customer does not opt in, a transaction that would overdraw their account is simply declined.)

Since then, overdraft revenue has dropped, and fear of further federal restrictions is encouraging some banks to take a gentler approach with those who do incur the fees. The Consumer Financial Protection Bureau is expected to release new overdraft regulations in the next year, according to the WSJ.

That piece mentioned earlier numbers more in line with the claims of the meme:

The Wall Street Journal, citing data from economic research firm Moebs Services Inc, reports revenue from overdraft fees is down 4% from last year, the largest drop since 2011. Overdraft fees tend to dwarf other consumer-related revenue streams like ATM and maintenance fees and the WSJ notes overdraft fees make up 6% of earnings at banks with at least $10 billion in assets. Total overdraft revenue has fallen from $37 billion dollars in 2009 to about $31 billion today.

In May 2015, CNN Money provided what may have been the source for the meme when it reported that a CFPB report found that Americans paid more than $34 billion dollars in service charges in 2012 — 61 percent of which were due to overdraft fees:

For customers who don’t opt in, the bank will decline any ATM withdrawals and debit card transactions that exceed the amount available in the account at the time of purchase. But they can still charge a fee for those who do consent to the coverage.

Weinstock said that most people would rather their card be declined, than have to pay a fee.

“The vast majority of consumers, 68%, would rather have a transaction declined than go through for a $35 fee,” she said.

Nearly 60% of banks charge an extended fee if an overdraft charge isn’t paid off within a set amount of time, the report showed.

A report from The Consumer Financial Protection Bureau found that costumers dished out more than $34 billion in service charges in 2012, with 61% stemming from overdraft or nonsufficient fund issues.

Given that the $30 billion in overdraft fees meme appeared a few months after CNN Money reported the CFPB figure of $34 billion in fees in 2012, it is likely that the claim was based on that news. However, an important piece of nuance was absent from the claim. In 2012, the year from which CFPB pulled the figures, banks collected over $34 billion in all fees in total. Of that amount, 61 percent ($20.7 billion) was in overdraft fees. As the meme suggested, those funds did come from the least wealthy consumers. However, the figure was not accurate on its own, nor was it accurate for 2018.