Joshua trees were destroyed as a direct consequence of the 2018-2019 federal government shutdown.

On January 10, 2019, the Facebook page “The Other 98%” shared a meme about Joshua trees which were purportedly destroyed due to the 2018-2019 federal government shutdown: 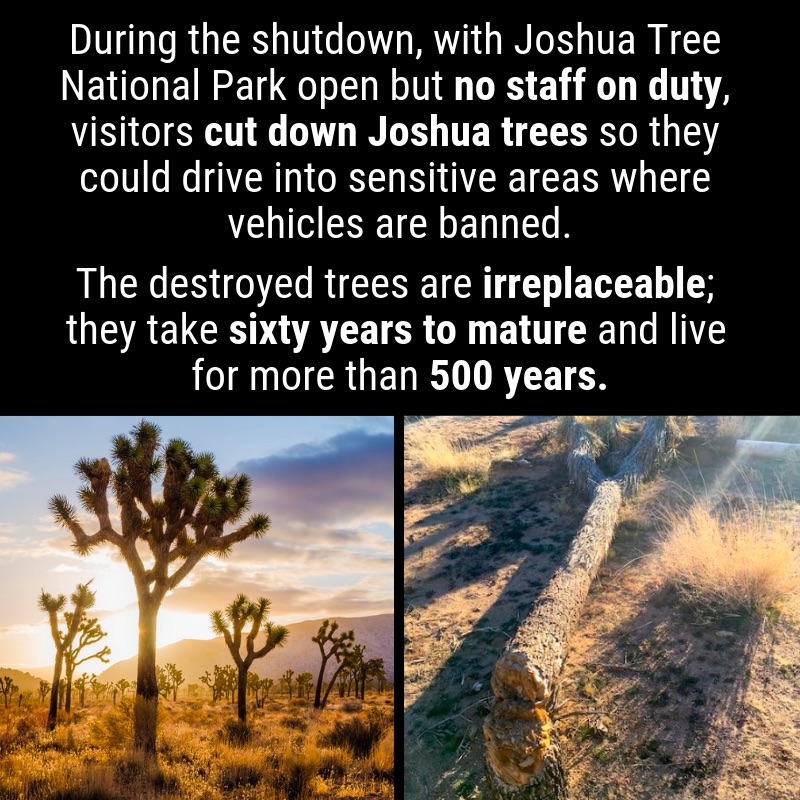 During the shutdown, with Joshua Tree National Park open but no staff on duty, visitors cut down Joshua trees so they could drive into sensitive areas where vehicles are banned.

The destroyed trees are irreplaceable; they take sixty years to mature and live for more than 500 years.

Its claims were multilayered, saying that slow-growing trees were destroyed in Joshua Tree National Park as a direct consequence of the shutdown, and that if staff were present the trees would necessarily have been safe.

The image on the right side of the meme appeared in a widely–referenced January 8 2019 post published by National Parks Traveler, “Joshua Tree National Park To Close For Cleanup, Repairs To Vandalism, Illegal Roads”:

[In the first week of January 2019], park staff closed its campgrounds to overnight use because of sanitation problems, but many visitors ignored that closure. With just eight law enforcement rangers working during the partial government shutdown it was impossible to cover all areas of the park, which is about the size of Delaware.

“There are about a dozen instances of extensive vehicle traffic off roads and in some cases into wilderness,” Smith replied when asked about the damage in the park. “We have two new roads that were created inside the park. We had destruction of government property with the cutting of chains and locks for people to access campgrounds. We’ve never seen this level of out-of-bounds camping. Every day use area was occupied every evening.

“Joshua trees were actually cut down in order to make new roads.”

A January 26 2019 Desert Sun article had more on the damage done by the five-week shutdown:

The event was originally aimed at calling on the government to stop the shutdown and to fund and protect National Parks, but dozens still turned out in the wake of Friday’s three-week reprieve to discuss the short- and long-term impacts of the shutdown, the importance of volunteering and other environmental concerns.

Park gates remained open during the shutdown as vandals cut down several Joshua trees and damaged rocks. Without park maintenance crews for the first three weeks, volunteers stepped up to clean bathrooms and collect trash.

This is not the first time Joshua trees were damaged by less-than-conscientious park visitors. In 2015, a man was arrested for illegally starting a fire that ended up burning a large swath of historic trees and other vegetation in the Joshua Tree National Park. Joshua trees were also harmed in large numbers in the 1980s and 1990s:

During the 1980s, an estimated 200,000 Joshua trees were replaced by development in desert boom towns. Many more were removed later to make way for renewable energy facilities.

In the 1990s, heavy rains triggered explosive growth of exotic grasses among the trees. Feeding off nitrogen-laden smog, the grasses left Joshua tree forests vulnerable to large-scale brush fires such as one that charred 14,000 acres in 1999.

Some researchers think an average lifespan for a Joshua tree is about 150 years, but some of our largest trees may be much older than that.

The meme claimed that visitors to Joshua Tree National Park cut down Joshua trees during the shutdown of 2018-2019, which is true. Joshua trees do take five to six decades to mature, but their lifespans are not typically described as “more than 500 years.” However, the park’s former superintendent, Curt Sauer, says that damage done during the shutdown will take two to three centuries to undo.